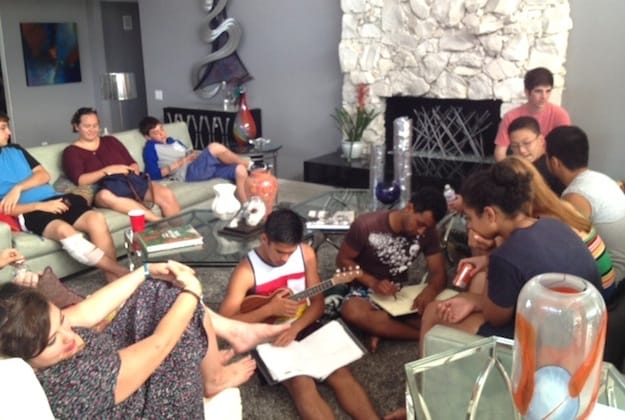 Palm Springs residents Jeff Dvorak and Michael Slocum threw an impromptu pool party July 20 for more than 110 Idyllwild Arts Summer Program students and counselors who were evacuated from the Idyllwild Arts campus July 17 due to the Mountain Fire.

Dvorak and Slocum, both Idyllwild Arts Foundation board members, opened their home to the students and counselors, who were initially sent to an evacuation center at Hemet High School. Some of the students were picked up by their parents, but those left behind were transported to nearby desert communities.

“You would never have guessed that the 110-plus students were displaced under tough circumstances; they were each so polite, appreciative, complimentary and genuinely happy to be here,” said Slocum.  “Our house never felt so good.”

The day following the mandatory evacuation, Idyllwild Arts alumni and current students spontaneously produced an extraordinary Rain Dance video and posted it on YouTube, which has attracted more than 3,000 views.

“The creative spirit is so resilient – there was singing, piano playing, a brass ensemble and a chamber group that improvised by using an empty instrument case and plastic cups filled with coins for percussion.

Students made sketches and even sculptures out of cans and there were even a few that were performing the Rain Dance. While they had fun, it was clear they can't wait to get back on campus, they love that place,” Dvorak said.

Nearly 1.5 inches of rain fell in on the Mountain Fire in the early morning hours of July 21 to significantly aid firefighters’ containment efforts.