Palm Springs Film Events - If I Were You 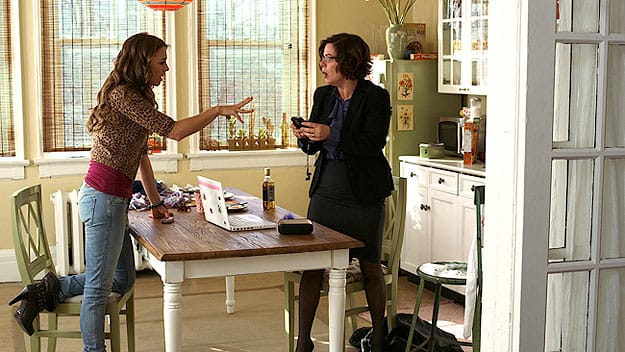 Leonor Watling and Marcia Gay Harden star in "If I Were You."
IF I WERE YOU

Her impassioned half of a cell-phone conversation grabbing the attention of a director during auditions for King Lear, a successful business woman lands the title role (though she was only at the auditions to support an aspiring actress). Playing the wife/King Lear in Joan Carr-Wiggin’s comedy/drama If I Were You, Marcia Gay Harden proves herself to be more than a capable actor.

“She’s a genius,” Carr-Wiggin says. “We had two days to do [the Lear scenes], and she had literally no rehearsal time. She’s the ultimate professional.”

That Carr-Wiggin would have a woman playing a male role supports her writing/directing milieu of making films with strong female leads. Like Previous Engagement, which she also wrote and directed, If I Were You focuses on women dealing with the complications of family life. Though she won’t reveal details of the script she has just completed, Carr-Wiggin says her next film, Love of My Life, is a comedy-drama in a similar vein.

The world premiere of If I Were You screened Jan. 10, 2012, at the 23rd annual Palm Springs International Film Festival. Shot in Canada over a five-week period, the film opens in the United Kingdom in March and in the United States in May.

“You couldn’t ask for a better world premiere,” Carr-Wiggin says. “The audience was so intelligent and so open to the film. They got so many subtle things in the movie. It was a dream audience. I had breakfast with Marcia this morning [the day after the screening], and she agreed.”

The film — produced by Carr-Wiggin’s husband, David Gordian, and Alan Latham — was expected to premiere in England, but Harden’s schedule prevented her from flying overseas. “I remembered there was a festival out here,” says Carr-Wiggin, who lives in Toronto, “and we were thrilled to come to Palm Springs in January!”

It was not Carr-Wiggin and Gordian’s first visit to the desert resort area. “We lived in L.A. for two years and came here several times,” she recalls. “For a while, we were thinking, ‘Is there any way we could live here?’” Instead, they moved back to her native Toronto. “As you get older, you really appreciate nationalized healthcare,” she explains.

In addition to Harden, If I Were You stars Joseph Kell and Aidan Quinn. But the second juiciest role goes to Leonor Watling, a young actress from Madrid who also sings with Marlango, a band heavily influenced by Tom Waits.

“I wrote it for Leonor,” Carr-Wiggin says. But when she sent the script to the casting director, she didn’t know of anyone to play the key role of a middle-aged woman who discovers her husband is cheating on her. “He said he had worked with Marcia Gay Harden on a comedy years ago and thought she would just be perfect for it. He called her manager and asked her to read it right way; they were in really rapidly.”

Harden plays Madelyn, who discovers her husband having an intimate dinner with an attractive, younger woman. In a twist that early on reveals Harden skilled at physical comedy, Madelyn finds herself keeping the young woman, Lucy, from committing suicide. Bonding with her savior (whom she does not know is her lover’s wife), Lucy suggests they offer each other advice about the men in their lives, thus the title of the film. Madelyn even finds herself mentoring Lucy as an actress. In real life, Harden mentored Watling.

“Their relationship mirrored the relationship of the characters in the film,” Carr-Wiggin says. “Marcia was incredibly generous, and Leonor said it was the best working experience of her life.”

Carr-Wiggin derived the premise from an old friend who said he and another of his friend’s lives had become so screwed up that they could make decisions for each other and “it couldn’t get any worse.”

What drives Carr-Wiggin in part is her believe that the film industry offers few good parts for female actors. “Often women get stereotyped as all they want to do is go shopping, cook, and decorate,” she says, noting that none of those activities is really up her own alley. “So I like to present women as ‘humans’.”

If I Were You is refreshing in the way Carr-Wiggin does so in smartly humorous fashion (as well as for its lack of violence, sex, and foul language).

“My favorite part of filmmaking is like last night,” says Carr-Wiggin of her plan to keep one eye trained on comedy. “You sit in the audience and hear people laugh. I wouldn’t want to give that up.”