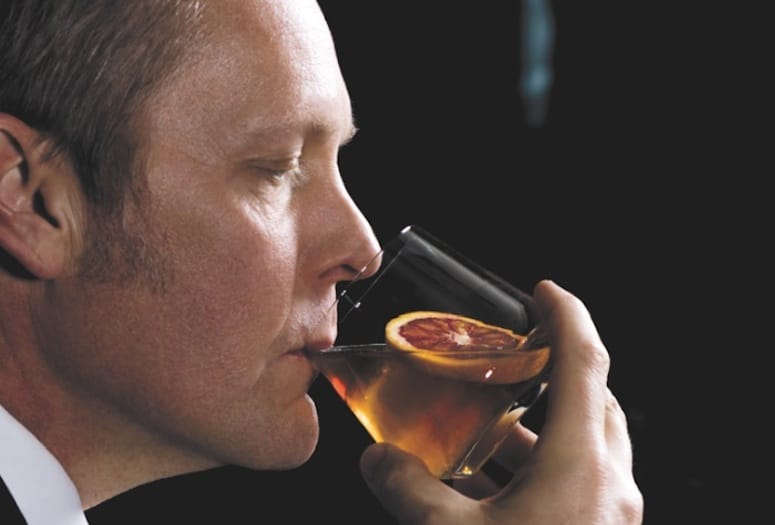 At the Edge Steakhouse at The Ritz-Carlton, a candied orange sometimes substitutes for a Luxardo cherry.
HOTOGRAPHS BY MISHA GRAVENOR

“Dark spirits have had a rebirth,” Eric Aarons tells me solemnly. In some circles this pronouncement might elicit a spine chill, but here at The Edge Steakhouse at The Ritz-Carlton, Rancho Mirage, Aarons is referring to those Mad Men-era cocktails such as the sidecar, the old fashioned, whiskey sour, and the gods’ nectar of them all: the Manhattan.

Aarons knows cocktails. He has been mixing them since getting started not far from the Tar Heel campus in Charlotte, North Carolina, 33 years ago. He has presided over The Edge’s stylish and enticing bar since it opened. “A certain number of my customers want vodka and plenty of it,” he rues. “But starting about eight or 10 years ago, about the time Mad Men came on, younger people started discovering some of the classic cocktails.”

Some historians posit that the first Manhattan was mixed in New York City in 1860 at a bar on the corner of Broadway and Houston. The bartender there was named Black. The Manhattan is my idea of a perfect cocktail. My last name is Black. Coincidence or familial whispers from a ghostly dimension?

My love affair with this concoction began, fittingly enough, at the Gotham Bar and Grill on 12th Street near Fifth Avenue, across the street from where I began my career. The Gotham’s Manhattans set a high bar, not only in terms of quantity (the cocktail glasses were about the size of my brainpan), but most certainly in terms of quality. The Gotham bartenders made their disapproval abundantly clear when your choice fell short of their expectations. It was also at the Gotham that I learned to ask for a twist of lemon rather than have my drink polluted by a disgusting candied, red-dyed cherry.

The latter is properly made with rye whiskey (which prior to Prohibition was distilled in New York state … so the case for it as the original Manhattan whiskey has merit), and both dry and sweet vermouths and the requisite dash of bitters. Whether or not this mix actually produces a “perfect” Manhattan is subject to debate and individual taste, but it does produce a slightly less sweet Manhattan, especially when a twist of lemon peel is substituted for the cherry.

Eric Aarons is not a fan. He is an ardent supporter of a traditional Manhattan: Kentucky bourbon, preferably Buffalo Trace, Carpano Antica sweet vermouth, and Angostura bitters. If you’re looking for Aarons to do some fancy bottle juggling à la Tom Cruise in Cocktail, you’re in the wrong  watering hole.  Aarons doesn’t mix Manhattans. He decants them.

Every so often, Aarons combines 15 liters of Buffalo Trace, 4 liters of Carpano Antica, and a 6.7 ounce bottle of Angostura bitters, and pours it into a small sherry cask that he keeps in a nice dark and cool corner for eight weeks. When his potent mix has thoroughly mellowed, he pours it into plain, dark green glass, cork-stoppered bottles.

“Your timing could not have been better,” he says when I stop in for a sample. “I just opened the cask. You’re having the first Manhattan from this batch.”

I settle onto my stool. It’s early on a Sunday evening and only one table of diners are present. It’s quiet and serene; the lights across the valley are like scattered sequins on black velvet.

My cocktail arrives in an old fashioned glass with an ice cube the size of a golf ball.  Aarons drops a small Luxardo cherry into the drink. Small like a fattened raisin, and potent, Luxardos are just tiny, sweet little exclamation points for a great Manhattan. Aarons also candies orange slices for a citrusy twist.

I sip. I roll the drink around on my tongue for several long seconds. It is both mellow and potent. Far from cloying, it’s just a hint of sweet that immediately vanishes into the bourbon. My stomach warms, my shoulders drop, my eyelids droop, and the corners of my mouth imperceptibly turn north.

The hell with the Gotham.

Not every bourbon whiskey makes a great Manhattan. Some whiskeys, like Black Maple Hill or Michter’s, should be sipped neat. Some, like Basil Hayden, are a bit too hot (107 proof!), and others, like Jack Daniel’s, are a touch too sweet. The following are a few favorites from my home bar.

• Elijah Craig, 12 years old: A couple years ago, before magazine editors started adding this surprisingly mellow bourbon to their “best deals” lists, it was one-third the price. It’s still the best bourbon I’ve found for less than $40.

• Buffalo Trace: Although a relative newcomer at just 16 years old, this smooth Kentucky bourbon has close relatives in high places as a product of the 200-year-old distillery that produces Pappy Van Winkle and Blanton’s. Neither hot nor sweet, it pairs perfectly with a top quality sweet vermouth like Carpano Antica.

• Blanton’s: Normally, I would not dare despoil a bottle of  Blanton’s in a cocktail, but you don’t have to use the whole bottle; two ounces will do. Go light on the vermouth and bitters, and forgo the cherry. This is the Fifth Avenue of Manhattans.

• Crown Royal: Canadian Manhattan loyalists exist on both sides of the 49th parallel for good reason; it’s a subtle but unique variation. Crafted along the shores of Lake Winnipeg since 1939, Crown Royal will add a touch of dry, northern grain to your Manhattan.