I'm Too Old To Retire 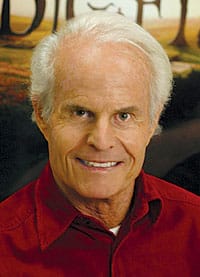 Three-time Academy Award-winning producer Richard Zanuck will enjoy something of a homecoming Jan. 21, when he receives Palm Springs International Film Festival’s Lifetime Achievement Award. “I haven’t been in Palm Springs for a while,” he says, “but I still think of it as a second home.”

Zanuck’s parents, Virginia and film tycoon Darryl F. Zanuck, bought their house on Tamarisk Road in Palm Springs before World War II. “I practically grew up in Palm Springs. I remember when I was little, maybe 5 or 6 years old, searching for Easter eggs with Shirley Temple and my two sisters.”

The Zanuck’s home was a magnet for Hollywood’s elite — and often the police. “The police visited us pretty often,” he laughs. “Everyone was so loud, yelling and screaming over croquet. It was an amazing battle with Sam Goldwyn, Mike Romanoff, Louis Jourdan, Howard Hawks, and my father acting as if it were a life-or-death struggle.”

Zanuck credits his father for influencing him in the art of filmmaking.“I had the advantage of being the son of one of the founders of the motion picture industry,” he beams, recalling being on the set of Gentleman’s Agreement, All About Eve, and The Longest Day. The elder Zanuck always emphasized the importance of good story as the foundation for any film.

A Stanford University graduate who served as a second lieutenant in the Army, Zanuck worked for his father as a story and production assistant before producing his first film — Compulsion, starring Orson Wells, Dean Stockwell, and Bradford Dillman — at age 24. The three actors shared Best Actor awards for their roles at the 1959 Cannes Film Festival.

He would earn many more accolades in the 40 years that followed — the most significant being the Irving G. Thalberg Memorial Award, presented to him and his longtime associate, David Brown, in 1991. This award, given only 29 times in the Academy of Motion Picture Arts and Science’s history, recognized Zanuck as “a creative producer whose body of work reflects a consistently high quality of motion picture production.” A precedent-setting honor and personal milestone, the award made Zanuck the only second-generation recipient.

A year prior, Zanuck and wife Lili Fini Zanuck took home an Oscar as producer of the Academy’s 1989 Best Picture, Driving Miss Daisy, for which he also received a Golden Globe Award, the National Board of Review Award, and Producer of the Year honors from Producers Guild of America. Driving Miss Daisy also marked the first time for father and son to win Oscars for Best Picture.

Zanuck’s career has been an inspiration: He headed 20th Century Fox production for eight years — a position he took at the age of 28. During that time, the studio received an unprecedented 159 Oscar nominations. Three films — The Sound of Music, Patton, and The French Connection — won Oscars for Best Picture. Later, as senior vice president of Warner Bros., he spearheaded The Exorcist and Blazing Saddles. Later, with the 1971 formation of Zanuck-Brown Co., he and David Brown introduced box office hits such as Jaws, The Sugarland Express, and The Sting, which won seven Academy Awards. He was also responsible for Planet of the Apes, The Verdict, Cocoon, Target, Wild Bill, Deep Impact, True Crime, Rules of Engagement, and Road to Perdition.

Today, at 68, he remains as passionate about filmmaking as he was as a rookie. He considers just-released Big Fish, directed by Tim Burton, the best film he has made. “If you haven’t seen it, I can guarantee you will like it, and I’ve said that about very few films. It has the heart and soul of Driving Miss Daisy and yet it has a lot of fun and the fantasy of Tim Burton.” he says.

He had such faith in Big Fish that he took the film to five cities — including Washington D.C., Atlanta, and Boston — to show it to opinion makers before its opening. “I never do that,” he intones about the film featuring Jessica Lange, Billy Crudup, Helena Bonham Carter, Steve Buscemi, Danny DeVito, and Palm Desert’s Alison Lohman. Zanuck thinks he has another Oscar contender, emphasizing the talent of Tim Burton, who also directed the 2001 Planet of the Apes.

“[Burton] is wonderful,” Zanuck says. “He has so much imagination and yet he’s uncomplicated and very organized. That is helpful to a producer. We have become very close friends.”

Burton says of Zanuck, “He could be jaded, but he isn’t. He still shows up for a project with this incredible, almost childlike excitement and energy, and that is just incredibly rare in this town.”

Zanuck and Lili Fini Zanuck — his wife of 25 years, producer, and director — live in Beverly Park, above Beverly Hills. Their English-styled home has a tennis court, swimming pool, billiard room, and a screening room. Zanuck’s sons — Dean and Harrison, from his earlier marriage to actress Linda Harrison and both integral to Zanuck’s company — join their folks for dinner two or three times a week. Zanuck credits both sons with finding new properties. Dean discovered Road to Perdition, and Dick suggested that he send it to Steven Spielberg, who produced the film starring Tom Hanks and Paul Newman through Dream Works in partnership with 20th Century Fox. Zanuck promoted his son to executive producer and sent him to Chicago to oversee location production. Harrison, the eldest son, oversees the Zanuck Co.’s busy production office.

Zanuck enjoys the relationship he has with his sons. It is different from the relationship he had with his own father. “My father worked late at night and I was usually asleep when he came home,” he recalls. “During the day, I would be at school. We lived in the same house, but sometimes weeks would go by and I wouldn’t see him.”

Zanuck and his sons also have biweekly tennis matches, and every fall the entire family goes to Idaho to ski at Sun Valley. “They are the light of my life,” Zanuck says of his sons.

Next on Zanuck’s schedule: Charlie and the Chocolate Factory, another Tim Burton project that will go into production this year; a yet-to-be-titled thriller under the guidance of Zanuck, Lili, and his two sons; The Ninth Man for Dream Works; and Yeager, to be directed by John Moore for 20th Century Fox.

It would be a punishment.”