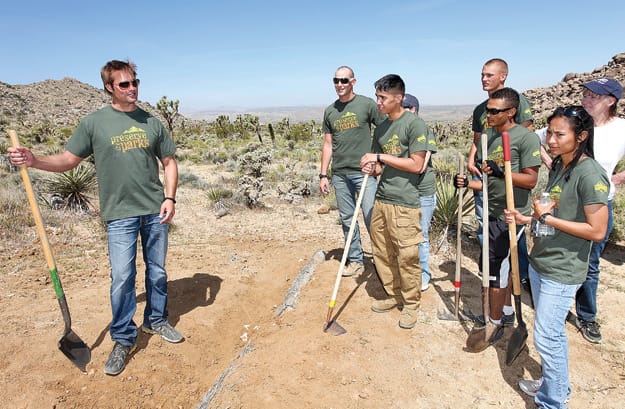 After concluding his role as Sawyer on Lost, Josh Holloway moved from Hawaii to California. In April, he worked alongside volunteers on a preservation project near Joshua Tree National Park.
JESSE GRANT/GETTY IMAGES

In April, he joined about 50 volunteers in spreading mulch and hauling brush as part of the Quail Mountain Project restoration effort, raising awareness of National Parks Week and launching the National Parks Project, a collaboration between the National Parks Conservation Association and Nature Valley.

The event was the first of six across the country to raise funds and help national parks, but it was Holloway’s only hands-on opportunity. “When can I get my hands dirty?” he asked at the start of the day.

Later, he encouraged volunteers with “Great job, guys!” and “Way to go!” and joked about making a “bouquet” out of brush. He even recruited a few Marines from the Twentynine Palms base to shovel as he pickaxed deep holes for anchoring brush to deter off-road vehicles from crushing endangered desert tortoises and their burrows. “So, where are you guys from?” he asked between axe swings. One Marine was from Puerto Rico, where Holloway’s brother also used to live.

An outdoor lunch at a Mojave Desert Land Trust member’s home followed the work. With the surrounding mountains as a backdrop, Holloway thanked participants, saying their work “means so much to all of us: preserving our national parks. I don’t think there’s a nobler cause right now.

“I think the ripple effect of raising this kind of awareness will be profound,” he continued. “We have these beautiful national parks; and they really are living, breathing classrooms for our children and for ourselves.”

A lifelong outdoorsman from north Georgia, Holloway grew up visiting national parks with his father. He continues that tradition with his wife, Yessica, and their 2-year-old daughter, Java. “The national parks have always been an important part of my life,” he said, “and I want to ensure they are preserved and available for future generations.”