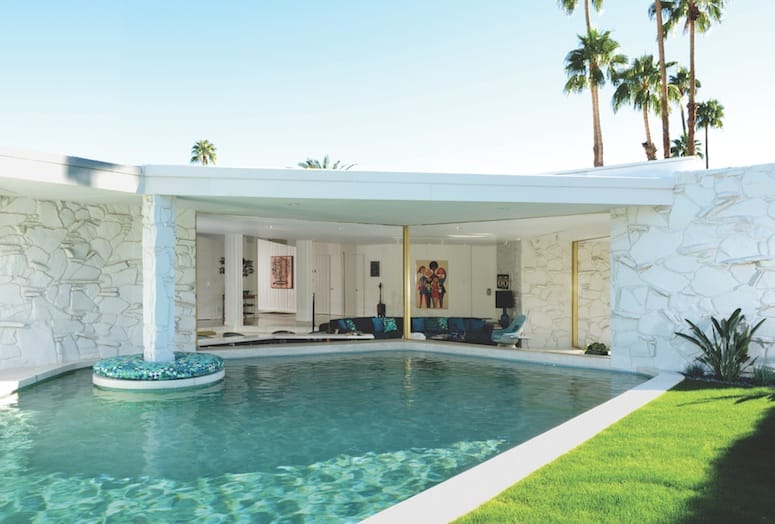 VIDEO: Take a tour of the Gands house and why they are longtime fans of midcentury architecture.

Joan and Gary Gand heard the buzz about their Palm Springs home long before they saw it.

“It was this legendary, cool house where people were going to parties and falling in the pool and that sort of thing,” says Gary about the 1960 residence, which was recently nominated by the Palm Springs Preservation Foundation as a Class 1 Historic Site.

Seeing the property was on the market again, the couple called their real estate agent, who was also curious to see it. After only a 40-minute tour, Joan and Gary — who collaborate as professional musicians and avid collectors of midcentury design — knew they had to buy it.

Befitting a home of creatives, the Gand residence hardly seems to stand still. Dynamic changes and transitions occur at every turn; walls shift in angle and the ceiling slopes dramatically. The centerpiece, a sunken living room with the walls arranged in part of a hexagon, wraps around the swimming pool.

“The geometry is like a crazy quilt,” Gary says admiringly. “At times, you’re not quite sure where you are. It’s like those fun houses you went into when you were a kid.” Indeed, after a few drinks, it would be hard not to fall in the pool.

Meticulous with details, the Gands have managed to piece together the original story of the house from a combination of inference and circumstantial evidence. The first owners were Teddy and Claire Morse, Angelenos who lived in a residential high-rise near Trousdale Estates in Beverly Hills. Mr. Morse apparently bought one of the famous Alexander homes during a Palm Springs visit, possibly without the prior knowledge of Mrs. Morse. Bob Alexander, the home builder, was a famously charming salesman. “You would start out having drinks and end up buying a home,” Gary says.

The home originally chosen by Teddy Morse was a no-frills ranch model. Claire Morse apparently did not care for the design, however. She wanted a new house like those then under construction at Trousdale Estates, which she could see from her condominium window. Several of those houses were designed by Harold “Hal” Levitt, a modernist architect known for creating homes for Hollywood’s elite. (He also designed the original version of the Riviera Hotel in Las Vegas.) The Morses hired a custom builder to add the Levitt design to the partially finished Alexander home, most likely one of the models designed by William Krisel. Homeowners Gary and Joan Gand, avid collectors of midcentury design, have a deep appreciation for all things vintage.

Just like their house, the Gands are multifaceted. Originally based in Chicago, the couple grew up in the showcase city of towering architects like Frank Lloyd Wright, Louis Sullivan, and Ludwig Mies van der Rohe.

In 1986, the couple bought a 1955 house by famed Chicago architects Keck & Keck, who popularized modernist home design in the Windy City. (The “Alexanders of the Midwest,” Gary calls them.) Their first modernist acquisition — the iconic potato chip chair designed by Charles and Ray Eames — came as a gift from Joan’s mother. The sight of the Eames chair in the 1980s was the road-to-Damascus moment for Gary, who became a fervent convert to modernism. “We got rid of the Italian, Miami Vice–type furniture that everybody had in the ’80s and started collecting midcentury,” he says. The couple started a preservation group called “Chicago Bauhaus and Beyond” and later produced a book for Rizzoli with famed architectural photographer Julius Shulman called Julius Shulman: Chicago Mid-Century Modernism.

As Joan and Gary’s education in modernist furnishings grew, so did their interest. “We used to go to the auction houses in the early days, before we had any money, just to learn about the furniture, their names, and the years they were made,” Gary says. Later, when their business of music retail and renting sound systems for rock concerts took off, the couple was able to start collecting.

In 2001, the Gands came to Palm Springs for the inaugural Modernism Show & Sale. On their third visit, in the spring of 2003, the couple acquired an Alexander A-frame. Not surprisingly, they fell hard for the desert capital of modernist design in the area. “We love the fact that the city was a time warp of modernism that has been preserved in this little valley,” Gary says. He also appreciates the rich inventory of midcentury objects available in the city’s many secondhand stores.

“We are always editing,” Joan says. In the fall of 2013, the couple purchased the Levitt home. A 1960s Malm-designed fireplace is the focal point of the master bedroom, furnished with a Togo sofa and ottoman and a 1950s headboard by George Nelson. A small side patio with a desert landscaped garden is accessible through the room.

The interiors of the Gands’ Levitt home show what serious collectors they have become. Upstairs, the couple installed a Comprehensive Storage System designed by George Nelson in the 1950s and manufactured by Herman Miller. Originally, they were able to find only half of the original storage unit needed to fill the space. A glance at an auction catalog revealed that the missing half was available for purchase in Chicago. The combination office/dining room also includes an oval dining table by Eero Saarinen, chairs by Richard Schultz, and a blue-and-green V’Soske rug from the 1970s.

The home’s interior design shows off the almost curatorial seriousness with which the Gands take the task of collecting and home furnishing. The couple is highly collaborative. “Gary and I love putting together the perfect scenario for a house,” says Joan, who says she lies awake at night wondering how best to decorate the Levitt house. “We love bouncing ideas off each other,” she says. Rather than simply move their furniture from the Alexander A-frame into the Levitt-designed house, the couple wanted just the right period furnishings. “We wanted the house to tell us what the design should be,” Joan says.

The initial inspiration for the décor was the Miller House in Columbus, Indiana, designed by Saarinen with interiors by Alexander Girard. Joan found a trove of original Girard-designed pictures and fabrics in an exhibition held at Chicago’s Merchandise Mart. The Girard windfall solved an important dilemma for the Gands: how to find a unifying theme for the many white walls in the Levitt house. Many of those walls have pictures and wall hangings by Girard, whose fabrics can be found throughout the house.

Good décor is not enough for the Gands, who, in addition to performing as the Gand Band at the Purple Room in Palm Springs, like to host live performances in their home. Gary notes that the acoustic properties of each room must be tweaked to get the sound just right.

Fortunately, the concave, polygonal-sided living room has good sound, according to Gary. “We did a performance with a duo from Australia,” Gary says of a recent home concert. “We seated them in the sunken part of the living room, and I sat in the back corner, just to make sure that people could hear.” The verdict: “We could hear them without amplification.” The house formerly known for its wild parties is now sending some better vibrations.

The Gands and their Gand Band will perform on Sat., Feb. 21, from 8-10 p.m. at the Palm Springs Art Museum Architecture and Design Center, Edwards Harris Pavilion. The event, “Party Like It’s 1961,” is a fundraiser for the museum and will include a 1961 fashion show, displays of vintage autos, dancing, and more. Tickets are $150. For information, visit www.modernismweek.com.