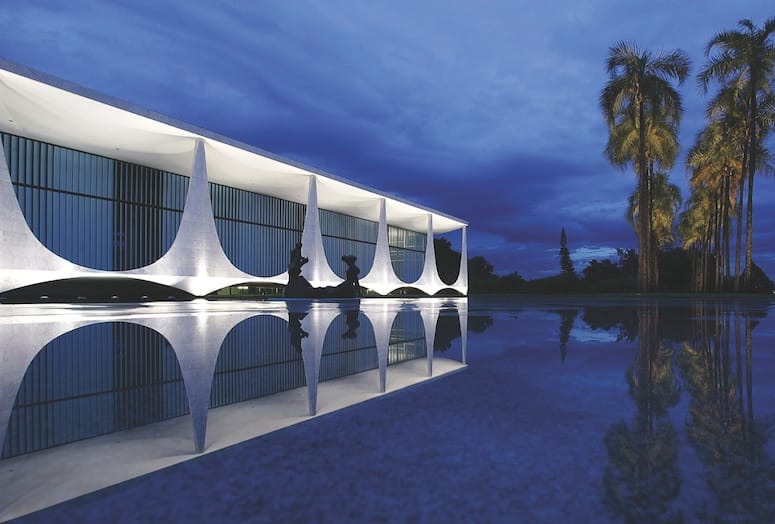 This cloudless midwinter day, Leonardo Montenegro is guiding his BMW convertible up into a Palm Springs hillside neighborhood where midcentury modern masterpieces are scattered like nuggets of gold among the tailings. He is pointing out the gems — Richard Neutra’s Kaufmann House, William Krisel’s House of Tomorrow where Elvis Presley honeymooned — but he’s also casting a critical eye on some of the newer wannabes.

“That house,” he says, pointing to a new, dun-colored, horizontal construction, “is so heavy. No lightness at all.” He whips by another and is happier. “Look at that one,” he says of a glass-walled structure with cantilevered carport roof surrounded by strong boulders and desert plants. “It’s so light, so beautiful, so sexy.” Montenegro is Brazilian by birth and a realtor by occupation, but his passion for houses, particularly midcentury modern architecture, comes from his education as an architect and designer. How he ended up in Palm Springs, of all places, after growing up in the verdant surroundings of Rio de Janeiro, is a longer story. Suffice it to say, Montenegro explains, when he first came to Palm Springs, it felt “like home,” largely because of the modernist aesthetic he saw in abundance. “Architecture drew me to Palm Springs, and I did adapt very easily,” he says. “Even though we don’t have the lush green landscape, the water, or the beaches, the architects here did a great job incorporating the environment with the architecture. That is the common element. That is what I feel attracted to.”

To be sure, the shared foundation rests squarely on European influences of modernism pioneers Le Corbusier and Mies van der Rohe, among others. But Brazil and Palm Springs adapted modernist principles to their own unique beat. There are strong similarities as well as differences, and Montenegro, on this personal tour, is pointing out both. One of the most remarkable aspects of Casa das Canoas, designed by Niemeyer in 1951, is the transparency of the home’s first floor, which blurs the distinction between interior and exterior space.
Photo by Luiz Claudio Lacerda

It might come as a surprise to many people, but, despite the obvious night-day difference in environment, there is a distinct visual and philosophical nexus between Brazilian and Palm Springs modernism. “Some of the buildings I see here, if you look at [what] Brazilians designed in Brazil, they have a lot in common,” Montenegro says.

To be sure, the shared foundation rests squarely on European influences of modernism pioneers Le Corbusier and Mies van der Rohe, among others. But Brazil and Palm Springs adapted modernist principles to their own unique beat. There are strong similarities as well as differences, and Montenegro, on this personal tour, is pointing out both.

The comparison might well begin with a fundamental difference in who commissioned the work and for what reason. By the 20th century, Brazil was eager to shake off the trappings of its Portuguese colonial past, with its foreign, highly decorative style. As its most skilled architects embraced the unembellished, clean-lined openness of modernism, the Brazilian government started awarding contracts for its most important public buildings to modernist architects. Those commissions ultimately resulted in official Brazil taking on a distinctly noncolonial, modernist look — an effort that would culminate in the creation, from the ground up, of the capital Brasilia in complete modernist style. Indeed, Palm Springs modernism has an entirely different story. Many renowned modernist architects came to the desert starting in the 1920s  because their Los Angeles clients wanted weekend homes here; Palm Springs offered a tabula rasa not for a monumental national project like Brasilia, but for a series of economically built and affordable tract housing developments for the middle class. Palm Springs does have its share of notable modernist public buildings — its 1952 City Hall designed by the architectural quartet of Albert Frey, John Porter Clark, Robson Chambers, and E. Stewart Williams; Donald Wexler’s 1966 Palm Springs International Airport terminal; and Albert Frey’s 1963 Tramway Gas Station, among them — but nothing on the scope or scale of Brazil’s most important public and private complexes.

Perhaps the key difference, however, is the look itself. “I think every element Palm Springs modernism has, you will find in Brazilian modernist architecture,” Montenegro says, “with the addition of one element — the use of the curve. That is the big distinction and trademark of Brazilian modernism.”

While Palm Springs modernist design generally followed the International Style’s rectilinear formula with typically broad horizontals, Brazilian modernism loosened those strictures and moved toward a more organic form that reflected the natural world around them. “It has to do with the environment,” Montenegro says. “Wherever you look, there are curves. I think of the waves, I think of Copacabana beach, and then, of course, the women. And even the mountains, they are so sensual, so curvilinear; it’s a big part of the culture.” Brazil’s best known and most celebrated architect, the late Oscar Niemeyer, internationally renowned modernist master and designer of Brasilia and so many significant public and private buildings, took modernism to its most lyrical height. From the upward thrusting spires of the 1970 Cathedral of Brasilia, to the impossibly floating ramps of the 1996 Niterói Contemporary Art Museum, to the swerving S-curve of his own 1951 house, Casa das Canoas, Niemeyer’s architecture asserts simultaneously an energy and sinuousness that fairly pulses with life — a type of architectural samba.

This exuberance within the strict modernist vocabulary can be infectious, and nothing demonstrates that better than the destination Montenegro is heading to at the moment. Cruising down South Palm Canyon Drive, Montenegro points out the Chase Bank building, originally the Coachella Valley Savings and Loan, designed in 1960 by E. Stewart Williams. Its signature inverted white parabolic arches that gracefully swing up to the roofline seem a direct descendant of Niemeyer’s 1957-58 Palácio da Alvorada, Brazil’s Presidential Palace located in Brasilia.

“To every single Brazilian, they look at this, and they say, ‘Oh my God, that’s Brasilia right there,’” Montenegro says. Brazilians also find a familiar sight in other Palm Springs design elements, he continues, particularly in one that deals with the onslaught of heat that both Palm Springs and Brazil must cope with. As he has been driving through the commercial and residential neighborhoods, Montenegro finds multiple examples of the sun-blocking architectural feature known generally as brise-soleils — or the cobogò in Portuguese — that attach to many buildings in both Palm Springs and Brazil. Typically made from panels of fenestrated patterned concrete blocks but also metal, as in the panels that cloak the Palm Springs Art Museum Architecture and Design Center, these structures, Montenegro explains, “are a source of shade, but also ventilation and light …”

The most significant similarity, however, and what drew Montenegro here and continues to excite him, is the integration of the natural environment and structure. He rhapsodizes about the Sao Paolo glass house created by Lina Bo Bardi “that is a pure interaction between nature and architecture,” he says, “two layers of concrete supported by walls of glass, with a tree in the middle of the house — very sensual.”

“I think every element Palm Springs modernism has, you will find in Brazilian modernist architecture,” Montenegro says, “with the addition of one element — the use of the curve.”

Montenegro is describing the Bo Bardi design while climbing the back steps of the Tennis Club toward its Bougainvillea Room, designed in 1947 by A. Quincy Jones and Paul R. Williams. Virtually hugging the mountain slope, the room’s broad windows surround boulders, incorporating them into the space. It is a technique John Lautner also used to great effect in the 1968 Elrod House, with glass wrapping around boulders in situ. And Niemeyer himself, in Casa das Canoas, allowed boulders to tumble through the glass walls straight into the interior.

“Who was influencing who?” Montenegro ponders the question. “You have these architects … intertwined, but doing their own thing.”

Perhaps the most important link between this stark desert tableau and the undulating green hills of Rio, says Montenegro, is this: “The passion comes to my mind,” he says. “No matter if the architect is in Brazil or here, the passion is to create a space and environment for the people. I think of the simplicity of putting two layers of concrete between a wall of glass, and you create a magical space with almost nothing. Every time I look at these homes, I think this is so gorgeous, and no matter how many decades ago, they still inspire me. I never get tired of looking.”