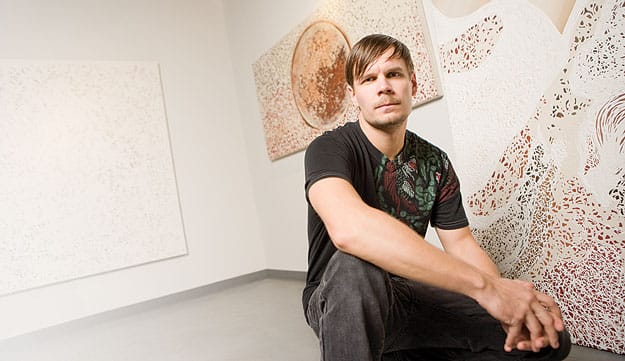 They looked surprised, curious. Stepping into the multimedia — and multisensory — installation Desert Abyss, visitors felt, heard, and smelled the sand, fish bones, and barnacles from the Salton Sea. And they snapped to attention, as a lesson about the intersection of fine art and the natural environment unfolded in three galleries at the Walter N. Marks Center for the Arts in Palm Desert.

For the artist, Cristopher Cichocki (chä-hä-skee), “Desert Abyss” was his first solo exhibition in the Coachella Valley, where he lives and works. For his audience, the paintings and sculpture with sound and video amplified the delicate and often-devastating collisions between people and the land and water around them. Working in a variety of media, Cichocki’s consciousness-raising art communicates in bright, loud, and often interactive fashion.

“Everyone who entered literally took part in the exhibition by walking and shifting through the crunch and dust from the ground,” he says. “Audio soundscapes of water filled each room, overlapping into a textural ambiance. Live and dead fish from the Salton Sea provided a particular scent in the space. The environment captured both beauty and corrosion that is difficult to fully describe in words.”

Day-Glo green and orange paint emphasize the “tension between organic and inorganic” and the “radioactive, acidic transformation, both hazardous and surreal in beauty.”

Located on the College of the Desert campus, the Marks Center opened the exhibition to eight art classes. For the first half of each session, Cichocki took the position of “fly on the wall,” listen-ing to students discuss and interact with the artwork. Then he joined the discussion. “I was overwhelmed by how pointedly each class articulated my intentions with ‘Desert Abyss,’” he says. “It was a truly insightful experience to get such a raw dose of unfiltered feedback that showed how the exhibition communicated itself.”

Water has always been a major theme in Cichocki’s work. “The transformative, ever-changing cycles within water essentially provide life,” says the 2001 graduate of California Institute of the Arts. “In contrast, an absence of, or contamination in, water just as easily takes life away. Collaborating with nature by re-examining, reinventing organic forms is at the core of my practice.”

Tough to classify, Cichocki takes cues from several movements and genres: Fluxus, conceptual, earthworks, Arte Povera, minimalism, and experimental music. His work asserts a symbiotic relationship; paintings, for example, often become sculptural, while retaining the gestures from his drawing process. “My photos, which become extensions of my sculptures, are very painterly and often used in my video,” he says. “My art practice is a cycle within a cycle, a process that is fluid and develops a synergy.”

Much of his art lives and dies outside the traditional gallery context as ephemeral works using found objects, often installed along dirt roads and captured through photography and video. His video compositions look like they sound — and vice versa. His 45-minute debut “visual album,” Elemental Shift, which took longer than two years to compose, was released by the Los Angeles label Table of Contents and screened in Canada, Sweden, and Brazil.

Last summer, Cichocki created a site-specific installation in the “ROJO®NOVA” exhibition at the Museum of Image and Sound in Sao Paulo, Brazil, where he also collaborated with other artists and performed six shows under his DJ moniker, Set Below Sea Level. He will participate again next summer in Rio de Janeiro.

Meanwhile, he also plays drums with an outfit called State Rec. and recently released “Overnight” (Accidie Records), his solo debut as Saivus in a hypnotic soundscape project. He also works as a curator at The Arts at Context, a 22,000-square-foot center in Indio, where he’ll introduce musicians and artists, as well as youth workshops, in conjunction with the Coachella Valley Arts Alliance.