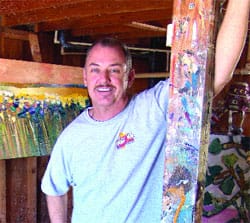 “I’m trying to combine landscape with modernism or representative art with abstract,” he says. While his works have been exhibited in several Coachella Valley galleries over the years (now at S.R. Brennen Gallery in Palm Desert), Ross wanted to start the Coachella Valley’s “season” with a new body of work. He continues to use his palette knives liberally, but now incorporates more brushwork — especially finer brushes. He’s also working in smaller dimensions: While his “normal canvas” may be 7×5 feet (such as his painting at the Desert Island clubhouse in Rancho Mirage), he’s now painting 4×5- and 3×4-foot canvases.

“I don’t want to be a conveyor-belt artist that just constantly puts out the same work year after year,” says the Morongo Valley artist, whose 10-acre ranch overlooks the High Desert and from which his latest inspiration comes.

“I am surrounded by Joshua trees,” he explains. “I am excited and compelled to do something with the scenery around me.” He also is concentrating on floral landscapes and ocotillo, which he describes as “almost like dancing trees.”

The musical reference comes naturally. In the mid- to late-1970s, Ross worked as a sound engineer in a Los Angeles recording studio. “Besides art, [music] was my dream, but I didn’t have ears of gold. I did not have the aptitude or the stamina to stay in that business for a lifetime.”

However, his friends did and, through those connections, he was commissioned to create nine covers for classical music CDs produced by Steven Spielberg’s Digital Theater Systems (the original paintings hang in the company’s Calabasas complex).

And he paints to music — anything from Frank Sinatra to rock ’n’ roll. He begins in his barn where the breeze passes through the open ends. This is where the “rough” work (initial paint and varnishes) takes place.

“As much paint might end up on the floor as the canvas,” he says. “And with the cost of paint right now, that’s not such a good thing.” Indeed, the barn looks like Jackson Pollock was his interior designer. But standing out among the paint-covered, weathered wood is a small picture of Vincent Van Gogh, whom Ross considers “one of the greatest painters ever.”

Two large paintings stand on adjustable, lean-to easels. Two more stand on easels in the house studio, where “the brushes go down in size and the movements are more careful.”

Ross typically works on three or four paintings at a time. “If I had more room, it might be more,” he says. “Sometimes I turn them against the wall so I can just focus on one. I find that if I get to move to another one and come back that I have a fresh inspiration.” Sometimes inspiration results in a new color.

He invents labels, too. When people ask him to describe his style, he tells them it is “landscape close-up.” As he explains, “The gen-eral world of landscape is a world of miniatures — miniature lakes, miniature trees. It’s really miniaturism inside of a bordered, framed canvas. I love to see blades of grass … in their actual size.”

In one of his latest works, Joshua’s Field, those blades rise halfway up the 55×53-inch painting in extended stripes of color. The effect creates a field of grass that others might paint with thousands of short strokes and shows through its efficiency Ross’ command of color. In contrast, he uses shorter brushstrokes at right angles for the Joshua tree trunks and branches.

An alumnus of Otis Art Institute/Parsons School of Design, Ross began his art education much earlier — when he was in sixth grade and the College of Marin was across the street from his school. He wandered in and started working with the college students in ceramics and painting. “I just knew I wanted a life in art,” he says, though he ultimately found it’s nothing like child’s play.

“A lot of times, people think art is fun time, but actually it’s down and dirty. It’s not always fun. And it can be so frustrating, as any job can be  — but art especially if you’re trying to make something out of nothing, because that’s what art essentially is: a creation from nowhere.”