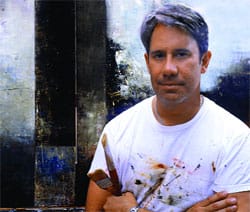 The Holy Grail for so many artists is to land a solo exhibition in New York. To sell out that show, well, that would raise the brows of gallerists and curators, up the price of the art, and (usually) instill confidence — an I’ve made it! feeling — in the artist. Emerging West Coast artists seldom make it to West 57th, a street densely populated with formidable galleries. Those who do are cherry-picked from Los Angeles-area art schools or galleries with a track record of nurturing such talent.

None of this is lost on Peter Burega, the Rancho Mirage- and Santa Fe, N.M.-based artist who in May sold out a series of abstract landscapes at CODA Gallery in New York. (He opens a show Jan. 14 at CODA Gallery in Palm Desert.) But his coming of age is something of a Cinderella story. He’s succeeding without any traditional art training. In fact, he went to school to become a concert pianist and graduated with sociology and law degrees. Once he was out, he worked in corporate litigation and television-commercial production. He freed himself of these intensely technical pursuits by painting serene, ethereal canvases — visceral expressions of an improbable inner peace.

At first, painting was a chance to exercise the other half of his brain. But when a Los Angeles interior designer asked Burega in April 1999 for two paintings to install in his showroom, it took no less than a day for two galleries to inquire about the work. “I quit my [TV production] job that morning and started painting a [series] in time for an August show,” Burega recalls.

In the years that followed, he worked on canvas, Masonite, and paper. He set aside his brushes for the more exacting effect of knives and steel trowels. He experimented with materials such as wax — until figuring out how to achieve the same illusion of backlighting with layers of semitransparent glazing. Wax, he says, “was becoming a crutch” and inhibiting the resolution of his surface issues.

Burega’s mercurial nature and obsession with process turn out increasingly thoughtful, wildly expressive, and ultimately sophisticated pictures. “People seem to think that I’m doing something totally different,” he says. “They like the combination of the geometry, the scoring of the boards, and the multiple vistas with changes of perspective.”

Burega is referring to the asymmetrical grid work he creates on his recent boards. He begins with predetermined ideas of how the geometric forms should appear on the board. Therein lies the point of departure from his old to new paintings: He no longer works with single images. “I’m processing all the imagery I see around me all the time,” he says. “I’ve allowed my brain to start processing multiple images, and that’s what’s coming out.”

Some of the geometric forms, or color fields, relate to traditional landscape. Others, Burega explains, “go into a micro/macro sort of thing.” One of his new, horizontal triptychs, for example, consists of a vista flanked by two close-ups of the horizon line.

“Being in New Mexico while painting these [made] a huge difference — not only from a landscape point of view, but also from being around Native American spirituality. This is an intensely religious place — everything from Roman Catholicism to New Age. The only way I can convey what I’m thinking and seeing in my head is to score multiple images on a board.”

His process begins with careful preparation of the surface — taping and cutting into the board. “It is taking my underpainting to a new place,” he says. “It used to be a visceral process that opened up until I thought I was done. Now there has to be more of a relationship between the grid work.

“I’ve gone in a circle,” he continues. “My process combines the ethereal and atmospheric work with the geometry. Now when I scrape and work backward, there’s a vividness back there.”

These new paintings also have stronger, more consistent composition. There are order, bold fields of color, and surfaces with conscious integrity. “I use much less paint than I used to, but I quadrupled the time I spend on each piece,” he says. “The reduction of my process adds to the strength of the work; [the process is] as much about editing as it is about painting.

“For the first time in my painting, I feel secure in my process,” Burega says. “The process is mine.”