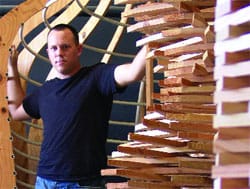 To design with a conscience is equally important as being design-conscious. It is within this notion that artist and architect Phillip K. Smith III operates his multidisciplinary studio and workspace, The Art Office.

“It is our desire to mesh the art and architecture disciplines as a means of creating innovative spaces and inventing new forms of architecture,” says Smith, who established his Indio studio in 2000. “We seek to redefine existing forms of communication to create work that interacts with the community, creates place, and establishes its own identity.”

He has been quick to effectuate innovative and graceful designs amid the desert landscape, beginning with the Palm Desert Presbyterian Church, which won the Grand Award in Public Design from the Concrete Masonry Association of California and Nevada in 2004.

One of his most recent artistic endeavors, Cylinders, combines Douglas fir wood stakes, chance, and patience.
“It began as an experiment,” Smith says. “I bought some stakes and stacked them in circular patterns over the course of four months. My assistant, Burzeen Contractor, and I began to listen to what the materials had to say. The brilliance was already there, existing; we just had to uncover it. The further we trusted the work, the better it got.”

The results are sublime and inspirational sculptures that, through natural and artificial light, reveal geometrical and structural individualities.

Smith is now exploring materials such as Cor-Ten steel, high-end woods, and colored Plexiglas for a multitude of applications, including furniture and lighting.

Born in Los Angeles and raised in Indio, he left in 1991 for Rhode Island School of Design and earned bachelor degrees in fine arts and architecture. After graduation, he worked for several prestigious Boston architecture firms, including Machado + Silvetti, Office dA, and Doug Delezal Architects.

While there, he also committed himself to the Harvard Graduate School of Design Gallery, overseeing curation and comprehensive installations of numerous exhibitions, such as Carlos Jimenez, Rei Kawakubo + Commes des Garcon, and Gio Ponti. He also taught at architecture design studios at Boston Architectural Center and Northeastern University.

Smith returned to Coachella Valley in 2000 to pursue his art. His work space, efficient and simple, is divided into two sections: a small area for general office use and artistic conceptualization and the rest for fabrication and production.

“A lot has to do with the name of this place, The Art Office,” he says. “The idea behind it was to establish a studio where I could collaborate with other people and work on projects that neither of us could do on our own. I wanted to create a center of art and architecture for the desert.”

Smith’s enthusiasm earned him the honorable position of founding chairman for Palm Springs Art Museum’s Architecture and Design Council. Through the newly formed organization’s efforts, renowned artists have lectured publicly, among them Jorge Pardo, Andrea Zittel, and architect Michael Maltzman. This season, designers Rick Joy and Karim Rashid, among others, discuss their projects and work philosophies.

“I wanted to bring more culture to the desert and have found that there is a real interest here,” Smith says. “My hope is to affect design in the desert so that people 50 years from now will want to be preserve what is being designed today.”

Notwithstanding his many accomplishments (the Palm Springs Modern Committee recently presented him the Excellence in New Modern Design Award), Smith continually strives for balance between art and architecture. Yet, his quest for purity endures.

“Good design creates a positive, memorable experience and shows us something about a place, a thing, or a use of a building that we never thought was possible,” he says. “Mostly, I think good design affects people. In all of my work, I try to create an experience that is unquestionably beautiful. I just don’t think that beautiful gets enough press these days.”