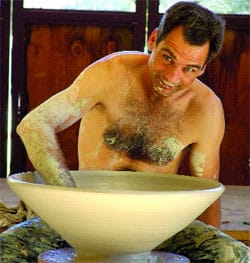 Steve Webster is probably best known for his custom furniture that resides in some of the most exclusive addresses in the Coachella Valley. But his new El Paseo gallery, Steve Webster Studios, highlights his sculpture and installations, as well as works by other emerging artists.

Webster draws on his days with the Nietzche Zoo Gallery, a woodworking cooperative in Canada that created art and custom furniture. His pieces are often composed of sleek geometric lines of rich hardwoods, marble, or steel, such as the meeting table at the Agua Caliente Band of Cahuilla Indians tribal office, the simple and elegant Leeds & Son Jewelers display cases, or the reception desk at The Hart Gallery.

Webster first came to the Coachella Valley in 1990, leaving Vancouver, British Columbia, for his wife’s health and soon settled in Pinyon Pines with a 3,500-square-foot workshop and business, Archipelago Design & Production. His first job was a custom piece of furniture for Insight West, an interior design company.

His formal art training began at 17, when he attended Sheridan School of Design in Mississauga, Ontario. At 19, he attended the Ontario College of Art, where the faculty named him Most Promising Student. However, he dropped out to hitchhike across Canada and plant trees in the Canadian wilderness. Then he joined the cooperative, which he describes as a “hippie-ish collective.”

“I was 20 and impatient, and I wasn’t concerned about getting a degree,” says Webster, who later studied bronze casting and ceramics in Vancouver — where he also began his long-term affair with clay, which he says symbolizes the cradle of humanity.

“Clay is an icon of civilization,” he says.  “[My art] is comparing the technological work of today and the primitive.”

His Sprung Rock, a large piece outside his El Paseo gallery, consists of a 500-pound boulder suspended with steel cables over a rolled-steel curved base. “This piece is about the tension,” he says. “It’s about gravity, and I wanted to play with the concept of defying gravity with technology.”

Webster works with familiar materials — wood, steel, marble, and glass — that he uses for his custom furniture business because they feel “real.” “They are more true to themselves,” he says. “They’re not trying to hide or fake things.”
He created untitled public sculpture with two thin sheets of slate that resemble wood hinged together and gored with steel rods. Again, he says it symbolizes the ancient harnessed to the modern age. Webster mined the slate on a mountainside in British Columbia.

In Wall Piece #2, a bar of lemonwood pierces rolled steel and a clay bowl. Through painstaking planning and working with the materials, he makes it appear as if the wood continues through the steel. Actually, it comprises three pieces fitted together in a seamless optical illusion.

He also believes in inspiring other artists, such as Tim Shockley, and getting them comfortable working with industrial materials. Shockley’s pieces at the El Paseo gallery show Webster’s influence.

“The more you know about materials, the more freedom you have,” Shockley says from his Laguna Beach home. “You don’t have to compromise as much.”

Webster’s experience with industrial materials allows him to overcome limitations or problems, sometimes plotting out possibilities by computer.

“If I find something really difficult, I kind of roll it around in my head for a while,” he says. “I’m always exploring technical solutions.”

“I really envy the looseness of some painters,” he says with a rueful smile. “But that’s not who I am. In steel and wood, you have to be very organized. If you screw up, you screw up and it’s no good.”