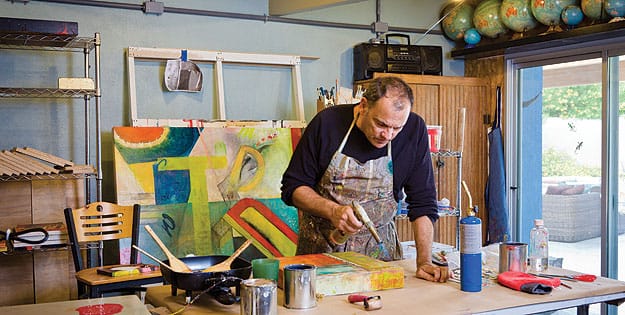 Charlie Ciali works on an encoustic painting in his Palm Springs studio. Behind him is one of his new acrylic works, American in Paris.
MARK DAVIDSON

Unlike tourists enamored by slick and shiny Las Vegas, Charlie Ciali clicked with the city’s lifeless side. “Old signs, rusted and in disrepair, 20-foot letters stacked on top of one another — I totally get that,” he says of his visit to the Neon Graveyard. Pictures he took inspired his latest work, but so did the local desert heat that caused him to move away from encaustic painting, his forte.

“It gets too hot to work with wax in my studio in the summer,” he says. “But I have all these acrylic paints. It was a big jumping-off point, because it was stepping outside my comfort zone.”

Ciali earned a degree in ceramic arts from Daemen College in Amherst, N.Y., in 1978, but after moving to Palm Springs in 2002 explored monotype printmaking.

“That series jumped into encaustic work,” Ciali says. “I loved the transparency [of monotypes]. The difference was I could manipulate the medium more in encaustic.” (He averages 20 layers per painting.)

He started small (12×12 inches) and progressed to 4×4 (and even 5×5) feet, a demanding feat when working with hot wax. “You can’t paint encaustic on an easel because you are working with molten wax, so you are looking down on the surface,” he explains. “I have a blowtorch in one hand and paintbrush in the other and am turning the whole painting like a potter’s wheel with my feet.”

Recently, he began working in the two mediums simulta-neously. “I find myself taking stuff I learned in encaustic and putting it into printmaking,” he says. And a stencil he has used to the end of its life as such goes to an encaustic painting.

Other common elements in his work include letters. “I travel so much and had always liked the idea that in any language those symbols have different meanings. I am fascinated that they are modern-day hieroglyphics.”

When visiting Portugal, he saw old billboards with strips peeling off. “It was like, ‘Oh, my God. It’s my work!’ It just made sense.” He applied the concept in a series that resembles one-piece triptychs. He points to one with an image of a man throwing a beach ball. “Whether it’s my own or a found photograph, I get hooked on an image like this and keep repeating it [in other works],” he says. “They kind of become friends.”

Ciali’s acrylic paintings migrate from his monotypes in one important way: “When I started printmaking, I depended a lot on found images, because I was insecure in my own abilities as a painter,” he says. “Those things are coming now.”

Just as his past work shuns a manifest, his new paintings refract the idea of decay that attracts him. “I didn’t want to paint it photorealistic,” he says. “I didn’t want the planes to make sense. I am looking at it like you are looking at a prism.”

Ciali, represented by Stephen Archdeacon Gallery in Palm Springs, teaches printmaking and encaustic painting at Palm Springs Art Museum and at his studio and mentors students at Palm Springs High School’s Arts Institute. “I walk away as enriched as I hope they do from having me as an instructor,” he says.