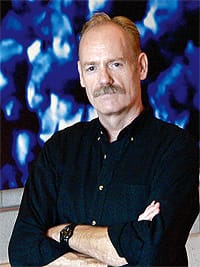 Robert Dunahay makes good use of the 22-foot ceilings at his Palm Springs studio. Taking the stately palm tree as his subject matter, he begins with the top of his canvas at eye level, then pulls a rope that raises the canvas so he can paint the next section, repeating the process until he has a painting up to 13 1/ 4 feet tall.

“Scale is important to the piece on so many levels,” says Dunahay, who rented the studio after moving to the desert from San Francisco. “I wanted to go up in scale to approach museums,” he explains. (He has a painting in the permanent collection of the Frederick R. Weisman Museum on the Pepperdine campus in Malibu.) “In San Francisco, 6×4 seemed pretty large. When you get them into someone’s apartment, they’re pretty big.” However, his perspective changed when he brought his inventory of work into his Palm Springs studio. “They looked miniscule in this space,” he says. The first 20 to 30 palm tree paintings, begun about 10 years ago, measured 44×40 inches. “That was a very unique approach, because you usually think of [trees] as tall and linear,” Dunahay says. Now his paintings more closely reflect those dimensions.

While he fears no scale, he also fears no color.

“I started painting red palm trees and purple palm trees. No one questioned it. It almost enhanced the exoticness of it.” That exotic flavor, he says, explains why people were constantly telling him they loved palm trees. “I started to realize that it wasn’t that they loved palm trees, but they loved what they stood for,” he says. “People view palm trees as a symbol for a perfect life where there are fewer problems, beautiful weather, and a tropical setting. I started focusing more on capturing the essence of palm trees rather than an agricultural image.”

Dunahay thinks of the paintings as portraits, which renders a different perspective than viewing trees in nature. “You look up a them,” he says. “In my paintings, you are face to face with them.” He even names them after friends or people he met while working on them (“usually somebody I liked”). While the works sell easily, no one has purchased one bearing their own name — though a friend bought a green and gold tree with a periwinkle background named for his cat: Sherby.

Another unusual aspect of Dunahay’s trees is his technique of painting the background last. He does that because he needs a pure white surface for the transparent oils he uses for the trees, and the backgrounds are painted with opaque paint. Although it’s more work, he likes the distinction it renders.

“It creates a sort of unsettled vibrancy to that edge; and if you do that right, it makes things pop out,” he says. “It also makes the trees very separate from the background, since the background is not sky or landscape.”

What surprises Dunahay is that he doesn’t see people looking at paintings very closely. “As an artist, when you are working on something, you know it intimately. And then people look at artwork from about 4 feet away. That’s a very interesting thing to me.”

At closer inspection, the trunks of his trees reveal an abstract imagery that inspired his Ribbon Series, in which he began moving paint around with different tools, sponges, and squeegees.

“It had all the excitement of abstract expressionism. It was a very personal series,” he says. “I felt it was very sophisticated and complex. There was so much going on in them that I had a hard time getting people to look at them. They liked the palm trees. The palm trees were easy to like. I was so interested in people experiencing the Ribbon paintings and seeing the way I was seeing them.”

After growing up in Denver and studying art at Metropolitan State College, Dunahay moved to New York City specifically to be an artist after reading Andy Warhol’s book POPism: The Warhol Sixties and being impressed by Warhol’s combined creativity and commercial sensibility. “He didn’t just want to be an artist; he wanted to be a successful artist,” Dunahay says.

At 25 years old, he placed his work into an Upper West Side gallery, but still had to get a job to pay the rent. After a brief stint working for a construction company, he started his own cabinet-making business and ended up with such high-profile clients as Barbra Streisand and Lauren Bacall. But in 1993, he thought time was running out if he wanted to pursue an art career and moved to San Francisco to start fresh.

“That was a big moment for me,” Dunahay says. “I had to ‘reboot’ as an artist. Bringing the discipline he learned from his Manhattan business into his California garden-level studio, he began exploring the map profile of San Francisco. “It was a fascinating shape for me, and it was a great way to get back into painting,” he says. He experimented with a variety of paint additives, including tar, cement, and Elmer’s glue. From there, he entered into the Palm Tree series.

“Things really took off for me,” he says. “I had several galleries and numerous distributors. … It was at that point I realized I didn’t have to be in a major city to be an artist, because I was shipping artwork everywhere.”

Dunahay moved to Palm Springs in 2005 after finding the area “inspirational” during a visit and happened upon the Williams Road industrial space when it was under construction. He likes the cinderblock walls, concrete floor, high ceilings and loft, and roll-up door. He also enjoys seeing planes taking off and landing at nearby Palm Springs International Airport. But it’s a craft of another sort that has his artistic eye.

Dunahay returned to his UFO series, which he began in Colorado. He collaborated with Palm Springs photographer Arthur Coleman, converting pictures of local midcentury modern homes into very low resolution images and then inserting into them UFOs (using pie tins to create the saucers) and adding an atomic glow with glow-in-the-dark spray paint to replicate the common 1950s-era of UFO sightings.

“The best part of that series was all the pictures are so blurry,” he says. “I loved that disregard for making it look like anything but a hoax.”

Once more letting his series overlap, Dunahay decided to cut “alien” crop circles into Astroturf panels he mounted below blurred images of a crowd scene. The triptych (part of his work with digital art) came about after he happened upon turf in the middle of the road one summer day.

An earlier work of digital art — also a crowd scene — is a 98×66-inch blurred composite of images rendered in blue and white. Up close, Sea of Humanity looks abstract; only by stepping back and viewing it from a distance does the crowd reveal itself.

I wanted to capture the whole human condition, the good and the bad, because it’s amazing how brilliant and pitiful we can be,” Dunahay says. “It shows how well we work as a unit, and everybody is still an individual. At any given moment, everybody has a different thought, and yet they are all there.”

Dunahay draws upon human culture for many of his conceptual artworks. His Rusted Dollar series examines the relationship between the economy and the public’s perception thereof. Rows of stacked hundred-dollar bills are screened onto canvas using very fine metal filings and then forced to rust through a chemical process.

“The metal dollars stand for a strong economy, and the rust symbolizes the rapid and destructive consequences of a negative public perception,” Dunahay says.

More lighthearted is his Food series, which began when, preparing dinner one night, he opened a package of nori (sheets of seaweed used for sushi).

“I thought it would be a great painting surface,” he recalls. He glued the sheets to a canvas, where it took on the quality of luminescent green granite. “The problem was it smelled,” he says. When he tried to seal it, it lost its visual appeal. But the experiment had another outcome.

“It made me think about the stuff we eat,” he says. And so, after Valentine’s Day, he purchased 60 bags of candy hearts.

“I just thought it was amazing that we make heart-shaped sugar with messages on them. If you just step out of your normal life and look at that, it just seems so out there,” Dunahay says.

He measured the center of the hearts and extrapolated what size the frame should be for rows to fit a 48×48-inch canvas (between 4,000 and 5,000 hearts total), but the candies turned out to be of varying size, so Dunahay had to hand-sand many of them for the piece titled Words of Love. He still has 25 bags of hearts for a future artwork.

After Easter, he bought 45 packages of marshmallow Peeps, which he set out in the studio for a year to dry and coated with acrylic spray. Originally, he planned to make a large painting with them, but opted instead to make smaller works with single rows.

“They look more like you squeezed them out of a toothpaste tube and put eyes on them; they don’t look like chickens,” Dunahay says. “They become very abstract when they are not in an Easter basket. What a strange species we are to have something like this on holidays.” Peeps, Dunahay believes, should be looked at in a different way — and he has enjoyed taking such items of pop culture out of context.

“It was fun to have the confidence to say, ‘Yeah, this is art.’”