Palm Springs - music | In Tune With the World 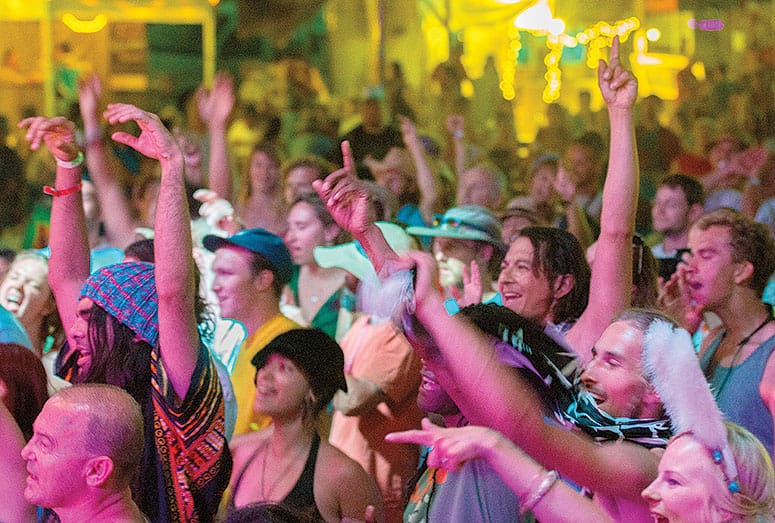 In an era of multimillion-dollar music festivals featuring lineups of mega-bands, the Joshua Tree Music Festival remains a pure, intimate affair that’s all about the music and the community. Set against the beautiful backdrop of Joshua Tree National Park, the festival (May 14-17) transforms the quiet, still desert grounds into a pulsing village with dozens of grand-scale works of art and music from all over the world. This year, the festival showcases 33 artists creating on-site works to be auctioned off May 17, and the Music Bowl once again becomes a cultural melting pot of cutting-edge tunes featuring players from Mali, Austria, Iran, Guinea, India, Cuba, France, and Australia.

This four-day family-friendly and eco-conscious event provides vibrant music and plenty of activities to nourish the soul. Yoga instructors, trained in a wide range of practices, are scheduled to lead classes each day from sunrise to sunset; an on-site astronomy theater staffed with trained astronomers and equipped with high-powered telescopes offers prime stargazing; and “Kidsville” features yoga and didgeridoo workshops for younger festivalgoers.

The pristine setting lends an additional spiritual layer to the festival’s transcendent tunes and healing classes. “I woke up one day at the Joshua Tree Lake Campground and thought, ‘This would be a great place for a music festival,’” says founder and organizer Barnett English. “Six months later [in 2003] we had the first one, and I have lived here ever since.” He created an oasis for music lovers with the help of like-minded friends who believe that music is the soul of life. That bond, spirit, and passion is much alive today and brings the best intimate performances to the stage. It’s precisely this cool vibe that has contributed to the rising popularity of the festival throughout the years, whose attendance has grown from 500 in 2003 to 4,000 in 2014. “Our growth has been an organic, homegrown arc,” says English. “People come and have a good time, then they bring more friends and family.” Delila Paz and Degey Pires of The Last Internationale

Power To The People
The Last Internationale, a powerful trio of modern-day musical revolutionaries, rides the cusp between hard rock and folk-protest music. Edgey Pires and Delila Paz began as a duo in New York, performing their first gigs at demonstrations and political conventions. The two met former Rage Against the Machine guitarist Tom Morello through mutual friend Boots Riley (Street Sweeper Social Club), and Morello became a fan of their music. They were looking for a drummer, and Morello introduced them to Brad Wilk, his longtime RATM and Audioslave bandmate. It was an instant match, and the trio began laying the foundation for their debut full-length record, We Will Reign. Wild West Burlesque
Desert native Gabriella Evaro planted roots in Joshua Tree as a young girl with her mother and siblings, cutting her teeth on the high desert’s art and music scene by performing with her family at local hot spots Pappy & Harriet’s and Beatnik Café. After years of making music in a band, she’s now launching her solo project, The Cactus Wine Experience — a musical revue and cabaret — at the Joshua Tree Music Festival’s Late Night After Party. Evaro considers the show an interactive piece of art — a living theater of sorts, featuring 1920s to 1950s-era jazz, blues, comedy, and burlesque dance. “This show will be audience-interactive and it has a sense of ridiculousness. It’ll be hard for people not to hoot and howl,” she says.

Here are our picks for an eclectic sonic experience at this year’s festival.

WHERE TO STAY IN THE HIGH DESERT The Joshua Tree Music Festival takes place on a 40-acre lake property that offers camping, RV spots, hot showers, and permanent restrooms. If sleeping under the stars isn’t your cup of tea, there are plenty of other lodging options, too.

• Spin that vinyl you purchased at the JTMF on hi-fi record players in the eco-chic, ultramodern Mojave Sands Motel, in the artisan village of Joshua Tree.
62121 29 Palms Hwy., Joshua Tree.
760-799-1603; www.mojavesands.com