In Viridian to Play at Global Day of Discovery 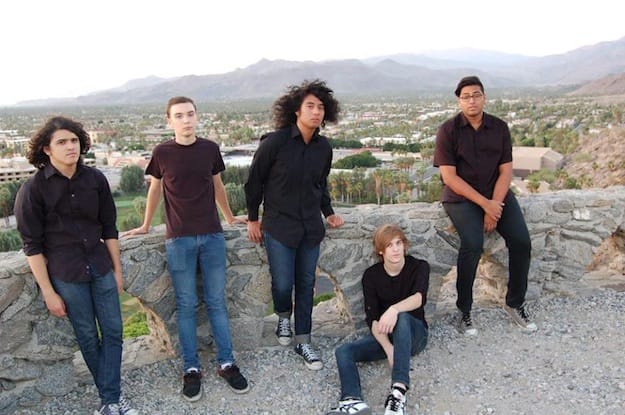 A very wise woman by the name of Annette Lara once wrote: “It breaks my heart to see my son and the guys disappointed and there is nothing I can do to make it better. Just remember when one door closes another one opens. You will have more than this one opportunity. You are all EXTREMELY talented. This is just the beginning for all of you!”

Those words were delivered via Facebook, after rhythm guitarist Nicolas Lara and his band, In Viridian, learned they hadn’t made the cut to play the inaugural Tachevah, a Palm Springs Block Party in spring 2013.

That event drew crowds in the tens of thousands, and also introduced the Coachella Valley to a number of local performers (the Tribesmen; You, Me and Us), who won the chance to perform on the same bill as headliner, Passion Pit.

For Palm Springs’ In Viridian, the path to Tachevah was in the band’s sight – but just not close enough to grasp (yet).

Cut to: Summer 2013. Mere months later, In Viridian’s name is scrolled across a bevy of press releases, Facebook pages, and even emails (as in, “Dude, you MUST come with me to see this band, In Viridian. They’re pretty sick!”).

Granted, I’m guilty of that last one, but the underlying message is the same: When your mom gives you advice about keeping a stiff upper lip and bouncing back, don’t roll your eyes … listen. Somehow, Mom always knows best.

In Viridian’s music is melodic indie rock punctuated with jangling guitar riffs, catchy melodies and Arturo Ramirez’s infectious vocals. The band will perform June 19 at Renaissance Esmeralda’s “Summer of Discovery” event in the GLO Lounge as part of the Global Day of Discovery.

Attendees, celebrate your love of local music and talent while you feast on bacon-wrapped Madjool dates for $7 and sip Gypsy red wine (Entertainer Nicky Valle’s medium-bodied combination of merlot and zinfandel) for $9 a glass.