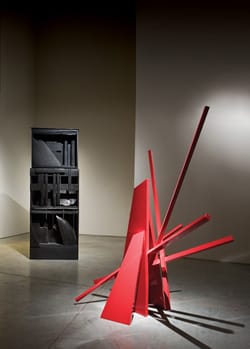 How do you beat an art season that started with a Hiro Yamagata  laser light installation (Buschlen Mowatt Galleries) and peaked with a smorgasbord ranging from figurative paintings by Eberhard Hueckstaedt (The Hart Gallery), pioneering ceramic sculpture by Paul Soldner (Edenhurst Gallery), and surveys of Modern masters (Eleonore Austerer Gallery) and A-list artists from “The Left Coast” (Imago Galleries)?

This year, you’d start at Palm Springs Art Museum, where new Director Steve Nash scrapped the fall exhibition in favor of The Crossing, an iconic 1996 video-sound installation by Bill Viola, whom The Wall Street Journal has called “arguably the only video artist of whom it may be said that the label is not a contradiction in terms.” This 12-minute installation features two images, each containing the same man in synchronized positions on opposite sides of the screen.

On one side, the man walks toward the viewer engulfed in flames; on the other side, a deluge of water befalls the same figure, who disappears on both sides as the flames and water dissipate.

“The two traditional natural elements of fire and water appear here not only in their destructive aspects, but also manifest their cathartic, purifying, and transformative capacities as well,” Viola has said of The Crossing, on view from Oct. 17 to Dec. 23.

In May, the museum opens a 35-year retrospective of realist paintings by D.J. Hall.

Across the street at The Hart Gallery, look for the German abstract painter Thomas Ritter, who appears at the gallery on Nov. 17; the show continues through December. Heiner Meyer (January), Margaret Kelley and Waldemar Otto (March), Joanna Zjawinska (April), and Raoul Wuestner (May) round out the season. Also look for works by Paul Wunderlich and Mohamed Abla.

Down the road on El Paseo, Edenhurst Gallery begins its traditional exhibition schedule with The California Desert 1860 to 1940, on view from Oct. 4 through December. The gallery’s main attraction will be Sam Hyde Harris, beginning in January 2008. On the contemporary side, look for photography by John Divola, who had 14 of his Isolated Houses prints in an exhibition earlier this year at The Getty Museum. In January, Edenhurst introduces glass sculptor Michael Aschenbrenner, whose Damaged Bones installation was part of a glass exhibition last year at LACMA. Edenhurst represents both the Isolated Houses and Damaged Bones.

These galleries, as well as the popular Coda Gallery (a 2006 Palm Springs Life Subscribers’ Choice Award winner), Gallery 1000, and others participate in Art Walk El Paseo every first Thursday — a fun way to take in all the eye candy.
Just south of El Paseo on Highway 74, Imago Galleries opens its season in November with a swan song for glass virtuoso William Morris, who enjoyed his own retrospective at Palm Springs Art Museum in 2004 and remains one of the gallery’s most popular artists.

At 49, the contemporary artist whose work represented indigenous, primitive cultures has announced his retirement. Constructivist sculptor Fletcher Benton also shows at Imago in November. The gallery’s other highlights include William Wegman in January and Ross Bleckner and Jennifer Bartlett in March.

Back in downtown Palm Springs, walking distance from the museum, Adagio Galleries showcases Miguel Martinez, R.C. Gorman, Roger Hayden Johnson, B.C. Nowlin, and many other Western, American Indian, and Mexican artists. The gallery traditionally opens an exhibition on President’s Day weekend celebrating the work of the late Gorman, whom The New York Times once called “the Picasso of American Indian art.”

On the north end of town, at Palm Canyon Drive and Racquet Club Drive, M Modern Gallery is high on the lowbrow, an art movement that has picked up much steam over the past two years. The gallery has some of the best concept shows (Blond Bombshells and Warholology were recent successes), as well as fun openings and art available at a variety of price points.

From one end of the Coachella Valley to the other, there’s fine art in abundance — something special for novice to seasoned art lovers. Enjoy!