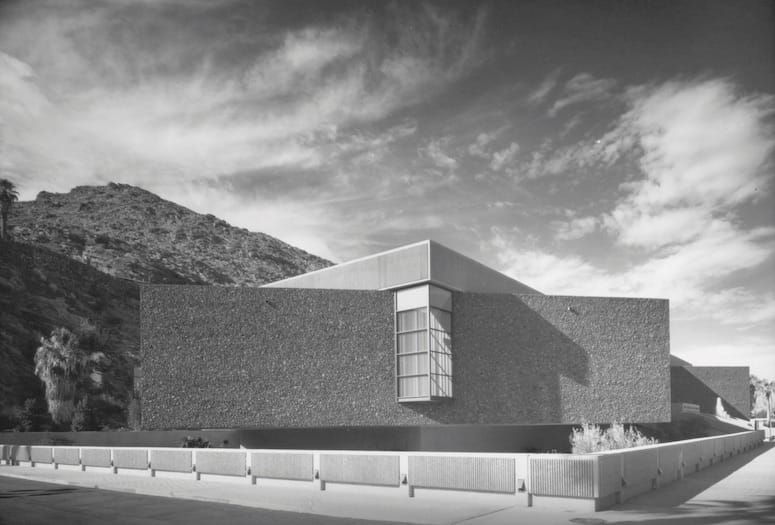 Palm Springs may have become synonymous with the midcentury modern era, but the  preservation of representatives from another architectural period from the recent past is  moving into public consciousness: the long ignored and often derided Brutalism.  Its signature concrete structures were inexpensive and functional, and many people saw them as hulking and unattractive, whether they took shape as schools, banks, or low-cost housing.

But, says Steven Price, “I think the resurgence of interest here is because the term ‘Brutalism’ is applied very broadly in the valley.” He would know. He writes about architecture, is a board member of the Palm Springs Preservation Foundation, and an adviser to the John Lautner Foundation. “Properly, it refers primarily to structures of poured or reinforced raw concrete which Le Corbusier called ‘beton brut’ in regard to his Unité d’Habitation [a 1952 French housing project], hence the genesis of the type. Here, it’s applied to buildings and homes made of stucco, adobelike materials — even wood — if they feature bulky masses and deeply cut windows and portals.

“When Hugh Kaptur’s Musicland Hotel or Michael Black’s wildly angular Pomona First Federal Bank [now US Bank] on El Paseo in Palm Desert, gets included in an article about ‘Notable Brutalist Buildings Around Palm Springs,’ you see that people are finding their own associations which may not be academically pure,” Price notes, “but they’re close enough for many to get interested or excited to begin with.”

Recently, the civic debate over the proposed demolition of Tahquitz Plaza, Hugh Kaptur’s four-pod office complex in downtown Palm Springs, brought public attention to post-midcentury architecture as something worth preserving, and led to the 1973 building being declared a Class 1 Historic Site. “People asked themselves, ‘How do I feel about it?’ A lot of people called it Brutalist,” says Price. “I see it as a bridge between the midcentury modern of the 1950s and 1960s and the desert modern that was to come in the 1970s through the end of the 20th century.” 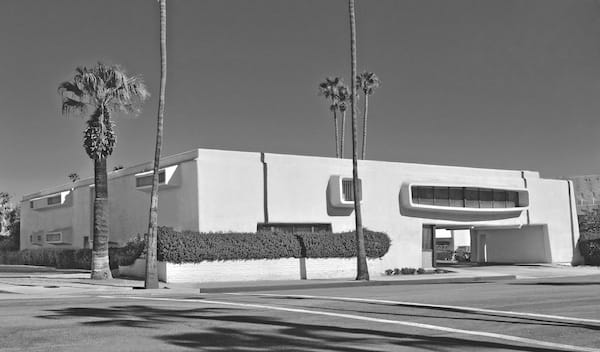 PHOTO BY DAN CHAVKIN
Musicland Hotel, by Hugh Kaptur, was built in 1967, and you can still book a room today.

But other Brutalist-style buildings were popping up around town at the same time, including the 1976 Palm Springs Desert Museum (now the Palm Springs Art Museum) by E. Stewart Williams, and William F. Cody’s 1975 design for the Palm Springs Public Library.

One of the most notable local examples of Brutalist architecture is John Lautner’s Elrod House, famous for its appearance in the James Bond film Diamonds Are Forever. “It’s almost like [Lautner and Brutalism] cross paths, but don’t stay aligned for very long,” says Price. “One is organic, kinetic, temperamental, combustible even — deeply dissatisfied by mediocrity. The other is ordered, systemic, modular, unmalleable, so conformity is enforced [and] you can’t really change the thing itself easily. The trait they have most in common … is they both start from a place of love of — and root belief in — engineering the material honestly and unapologetically stating its beauty and purpose simultaneously. 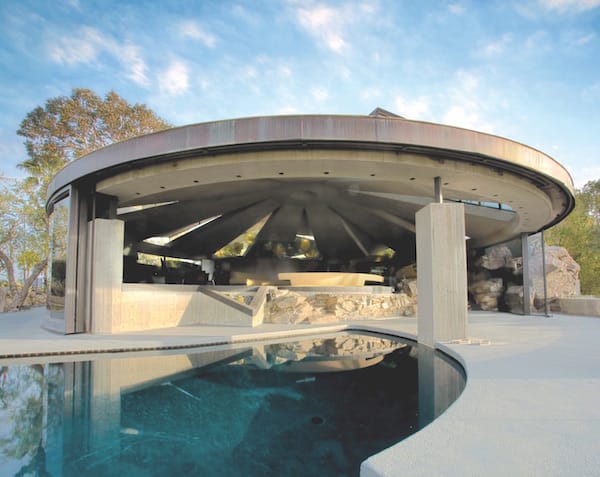 PHOTO BY JOSHUA WHITE/COURTESY OF THE PALM SPRINGS ART MUSEUM
“Iconic” is an overused descriptor, but not for John Lautner’s 1968 Elrod House.

Lautner was experimenting already in the post-World War II days having come out of the Frank Lloyd Wright/Taliesin world of ‘organic’ being expressed in highly filigreed geometry,” adds Price. “Well, he learns from it but busts out on his own, building and forming and experimenting, and by 1947 is already realizing technical bravura like the Foster Carling house above Mulholland Drive [in Los Angeles].”

Price, whose forthcoming book is Trousdale Estates: Midcentury To Modern in Beverly Hills, notes that by 1963, Lautner, like Wright, was operating outside of any school or discipline of architecture. 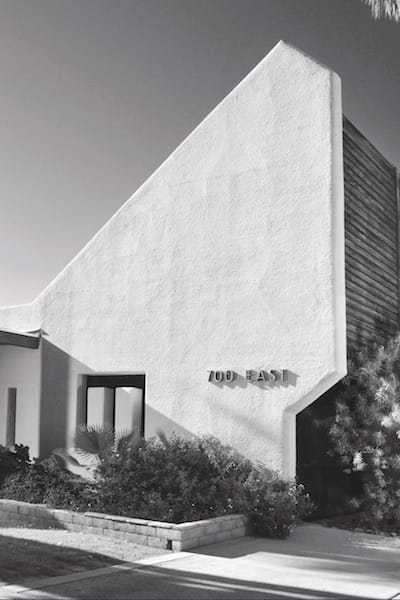 “Whenever he has the chance, he doesn’t just break the box, he detonates it. And by 1968, he starts work on the Elrod House in this loony, lunar landscape on a house whose client has given him a single instruction: ‘Give me the house you think I want.’ Note, not the house I want. Not the house the architect wants. But what the architect feels is right for the client. And then he lets him do it.”

Although the Elrod House is anchored by the rocks behind it, the structure’s gigantic roof appears to be floating in air. “It almost looks too ponderous to be supported by what’s below, which to most people’s eyes is a single, oft-photographed pillar at the front,” says Price. “What people can’t experience in photographs is the airiness — contained but never crushed by the solidity. It’s like we’re given two extremes: rock/earth and light/air, and expected to find our comfort zone.”

Whether more people will learn to find that comfort zone and embrace Brutalist architecture is an open question. But the Coachella Valley iteration of beton brut appears to be emerging from the shadows of its midcentury modern brethren.

We’ve given it a dressy introduction — see our fashion spread: Stone Cold Gorgeous