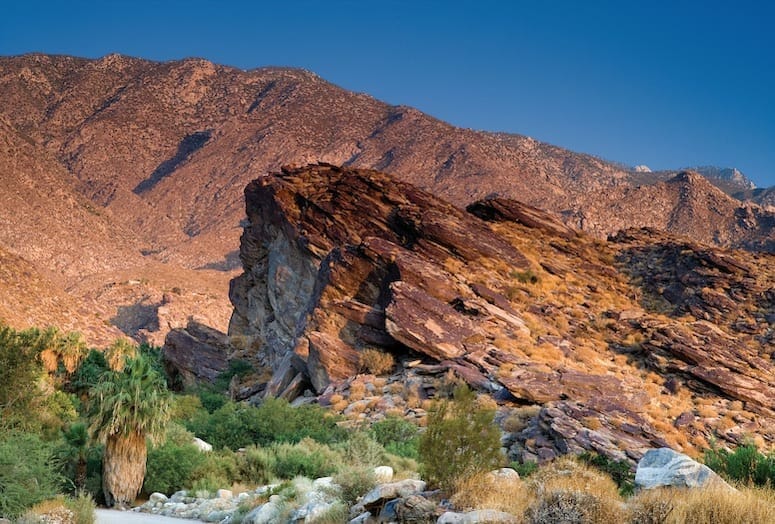 How many people can look upon a landscape and know they are seeing the same view as their ancient ancestors? Hearing the same calls of quail and prairie falcon, smelling the same fragrant trace of desert lavender and creosote bush? That’s the allure of Andreas, Palm, and Murray canyons in Palm Springs, collectively known as the Indian Canyons. Words and images convey fragments of this beautiful and sacred place, but the full in-person experience encompasses all senses in a deep connection to history.

While many non-Native American visitors know the Indian Canyons only as a delightful hiking spot, for the Agua Caliente Band of Cahuilla Indians, it’s the ancestral home they have stewarded for millennia; archaeological evidence shows human habitation in the Palm Springs area dating back 8,000+ years. Change came in 1775 when the Spanish explorer Juan Bautista de Anza arrived in what would come to eventually be known as the Coachella Valley. By the 1930s, the city of Palm Springs was already a popular destination, with the battle to protect the Indian Canyons underway—a battle that, in the decades to come, would comprise three elements: water, tourism, and development. By threading them together, we start to see a bigger picture of the Tribe’s unwavering dedication to their people and land. 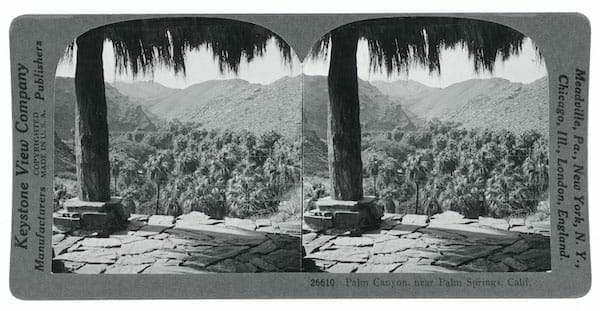 COURTESY LIBRARY OF CONGRESS
A stereograph of Palm Canyon from the Trading Post circa 1926.

From mountain-fed streams to lush palm groves to seasonal waterfalls, the Indian Canyons has long been an oasis of natural beauty and resources, providing the Tribe with more than enough raw materials to not only survive but to thrive.

Documentation from 1824 indicates the Cahuilla people were cultivating corn, pumpkins, and melons in mid-winter, sustained by irrigation ditches bringing water from Andreas Canyon and nearby Tahquitz Canyon to the valley floor. Small ponds and hand-dug wells provided consistent and sufficient access to water for people and wildlife.

Anthropologist, ethnohistorian, and educator Lowell John Bean documented the chronology and culture of the Cahuilla over the course of several books and research papers, culminating in the 675-page From Time Immemorial: The Traditional Ways and History of the Members of the Agua Caliente Indian Reservation, published by the Tribe in 2020. 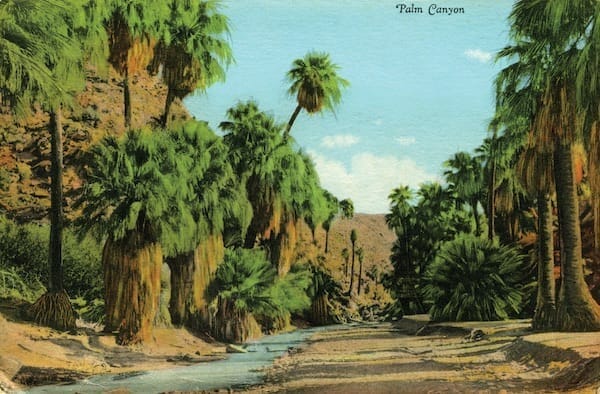 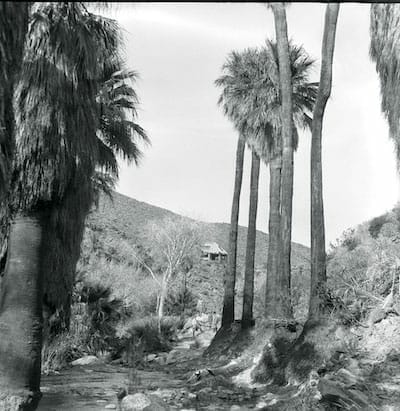 Bean traces conflicts over water rights to the 1870s, sparked by the gold rush. Encroachments intensified when lawyer and Palm Springs land developer John Guthrie McCallum, appointed to serve as an Indian Agent, began to capitalize on the region’s potential at the expense of the Tribe. In 1885, he built a flume to divert water from the Indian Canyons to his holdings. McCallum resigned as Indian Agent in the summer of 1885, but “trouble over the legal rights to Andreas Canyon water continued for more than 20 years,” Bean writes.

Even with Andreas Canyon secured, threats to the Tribe’s other water sources would occupy the next century, complicated by drought, flooding, outside influences and the demands of a growing population. Time after time, the Agua Caliente succeeded in defending this fragile natural resource. 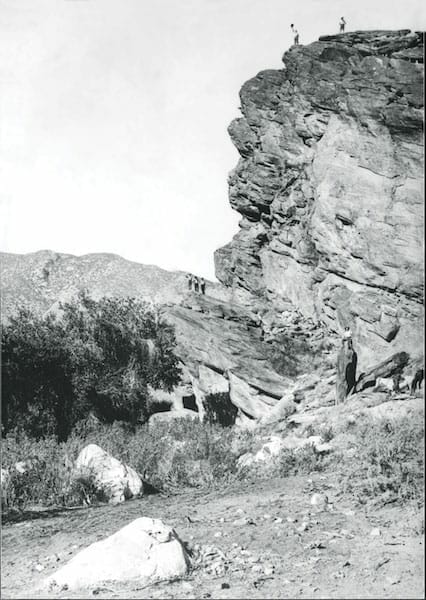 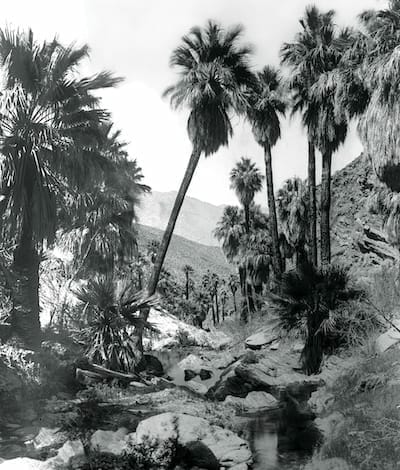 “The combination of arrowy brook, wild ravine, and tropic multitude of palms makes the spot  an enchanting one, and it never fails to draw a tribute of surprised approval from even the callous  globe-trotter.”

James Smeaton Chase,
Author of Our Araby:  Palm Springs and the Garden of the Sun

By the early 1900s, visitors had discovered the unparalleled beauty of the Indian Canyons. The 1920 publication Our Araby: Palm Springs and the Garden of the Sun by travel writer James Smeaton Chase lauds Palm Canyon: “The combination of arrowy brook, wild ravine, and tropic multitude of palms makes the spot an enchanting one, and it never fails to draw a tribute of surprised approval from even the callous globe-trotter.”

Those globetrotters included Hollywood stars and directors who used the lush groves of native Washingtonia filifera palm trees as the backdrop for films such as the 1918 silent drama Salomé, starring Theda Bara, and the 1935 swashbuckling pirate film Captain Blood, which launched the careers of Errol Flynn and Olivia de Havilland.

Horseback riding in the Indian Canyons was one of the area’s first forms of recreation beyond walking and hiking in the area. Beginning in 1930, the social group Desert Riders used Cahuilla trails with permission and often under the guidance of Tribal member and expert horseman Lee Arenas. In Favorite Trails of Desert Riders, by Doni Hubbard, the late Anthony Andreas, a Tribal elder and historian, recalls seeing wild horses in the Canyons when he was a child in the 1940s. “They would water at our ranch,” he told Hubbard, “and then gallop back up into the mountains.” 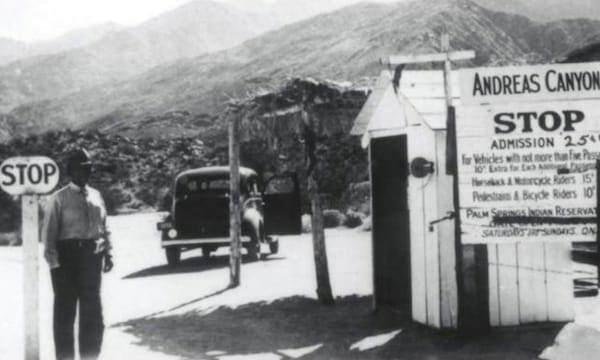 Given all the attention, civic boosters pushed repeatedly for the Indian Canyons to be designated a state park or national monument, ostensibly due to the Washingtonia filifera. In 1920, Congress proposed paying $22,000 for the land, or roughly $360,000 in today’s dollars. Superintendent C. L. Ellis of the Mission Indian Agency deemed the area “worthless” and of “no commercial value.” The Agua Caliente declined to sell, and the Canyons remained in Tribal hands.

Nevertheless, the constant stream of eager tourists had to be addressed. In From Time Immemorial, Bean says there were as many as 150 guests a day in 1923. Not everyone respected the environment; barrel cactus and palm trees were stolen, and hunters targeted bighorn sheep. It was clear that allowing access necessitated more control.

In 1927, a representative from the Indian Office reported that busy days could draw up to 5,000 people. A new road and parking lot had been built to accommodate the traffic, and the Tribe had begun charging entry fees. In 1938, it was 25 cents per car containing two passengers, 10 cents for each additional passenger, and an annual fee of $1 for horseback riding. 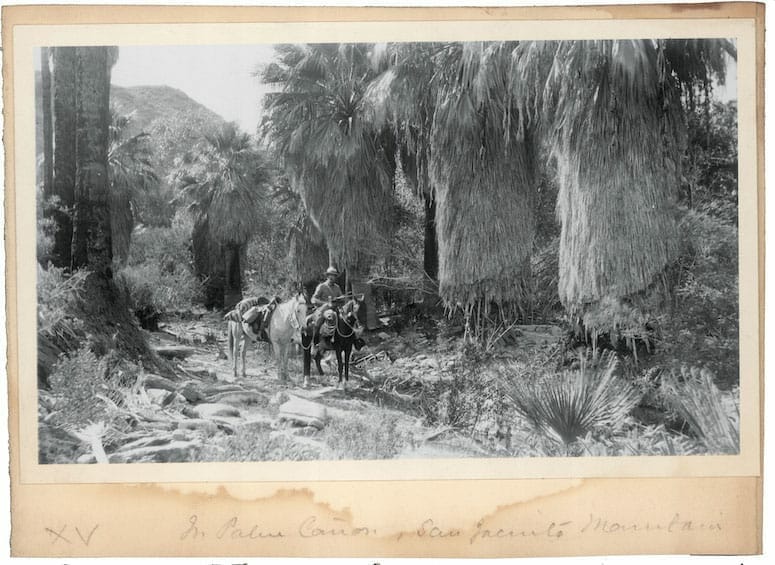 Land Use and Development

The 1940s, ’50s, and ’60s brought momentous change to the Tribe’s socioeconomic and cultural way of life. Palm Springs was in full swing as a premier vacation getaway, with new hotels and restaurants popping up everywhere. As development crept towards the Indian Canyons, Tribal members faced hard decisions regarding equity and conscientious growth

A look back at traditional Cahuilla social structure can help provide some context on the challenges they had  to overcome. Traditionally, people belonged to one of two moieties, Wildcat (Túktam) and Coyote (Ístam), which were further divided into clans. Land was stewarded by the clan who lived there. Andreas Canyon, with its lush and nourishing palm oasis and robust array of native plants and animals, was home to the Páiniktem clan ("Eary Morning People" and "People of Daylight") and the Káwisiktem clan, known as "people of the Fox." 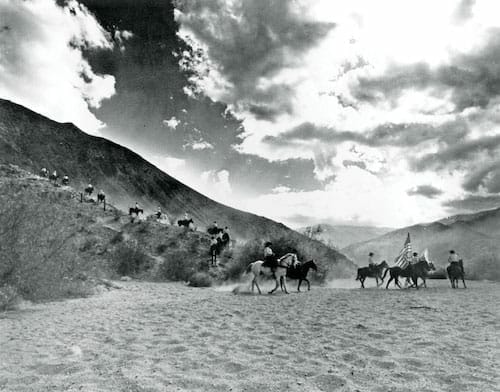 “I can sit on a rock and think how many generations, how many hundreds of generations of Cahuillas have sat on that rock and thought, ‘This is mine, this is where  I come from.” 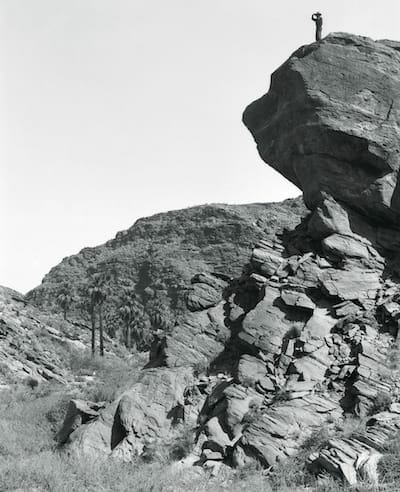 In the mid-1800s, the U.S. government created a checkerboard of land holding in the west end  of the Coachella Valley, giving one-square-mile sections to the Southern Pacific Railroad and eventually designating even-numbered sections as  the Agua Caliente Indian Reservation. The Dawes Act of 1887 further fragmented the Agua Caliente people by identifying allotments to individual members, a plan that didn’t come to fruition until decades later. Land that had been contiguous, communally held, and sustainably managed transformed into a grid, with individual ownership and development as the goal. The Agua Caliente, however, were restricted by federal law to five-year lease agreements on their segments, thus excluding them from participating in Palm Springs’ economic boom. The limited land lease situation continued until the 1950s, when an all-women Tribal Council, led by Tribal Chairman Vyola Ortner, finally earned the ability through an act of Congress to enter into land leases up to 99 years. 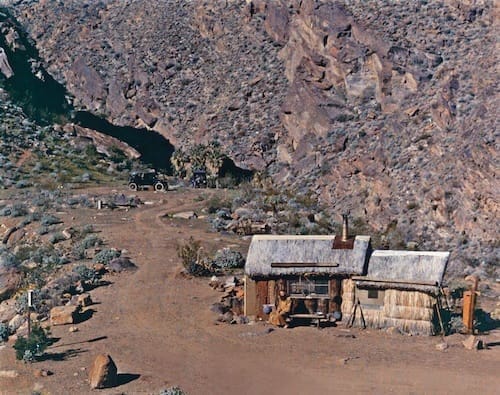 William Pester, known as the “Hermit of Palm Springs,” built this palm hut in the canyons; photograph circa 1915 by Fred Payne Clatworthy. 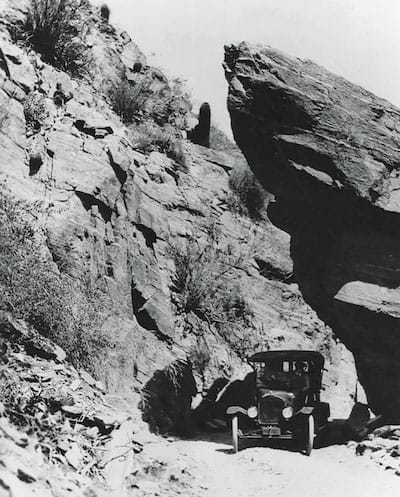 It was a tremendous leap forward in self-sufficiency—but with Tribal members now able to sell, lease, or develop acreage, the future of the Indian Canyons came into question once again. There were proposals to “punch through” the heart of Palm Canyon, building a road to the town of Ribbonwood on State Route 74 and destroying more than 15 miles of pristine wilderness in the process.

In the late 1970s, developers leased 450 acres of valley floor, planning to build 900 homes and a country club at the mouth of Andreas and Murray Canyons. The project was later scaled back to 295 homes yet still included a golf course, tennis courts, and a hotel.

Andreas Cove Country Club produced a heart-wrenching dilemma for Tribal leaders caught between the desire to safeguard ancestral lands and the sovereignty they’d fought so hard to achieve. A cultural rupture, seeded in the divisive checkerboard established a century before, cracked wide open when some members asserted their right to lift themselves out of poverty. 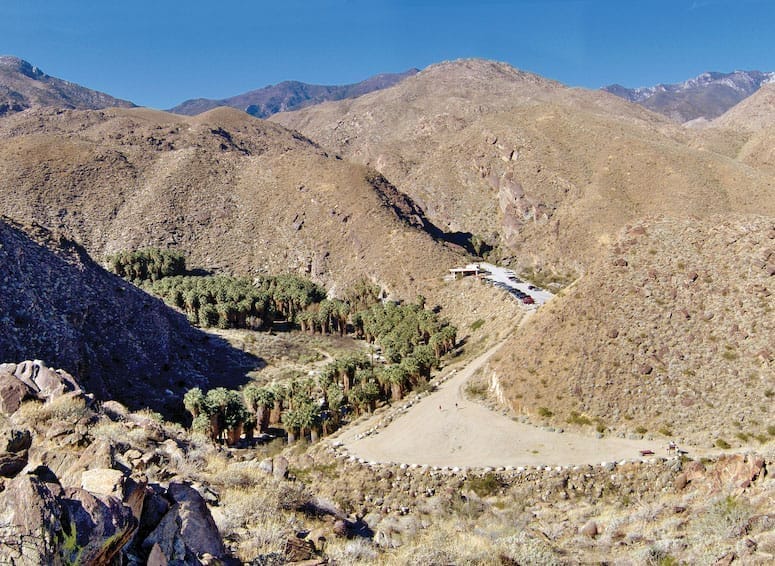 Ultimately, the Tribe turned the decision over to the Riverside County Board of Supervisors, and they approved Andreas Cove Country Club in October 1987. It was a risky strategic move intended to motivate all parties involved—which had grown to include the Friends of the Indian Canyons, Sierra Club, Audubon Society, Bureau of Land Management, and more—to come together and raise funds to buy the land and create a park to be managed by the Tribe in perpetuity.

The idea worked. Furthermore, it set the stage for the Indian Canyons Master Plan, still in use today. The plan outlines priorities for additional land acquisition, minimal development, public access and education, and preservation of natural assets including views, wildlife habitat, and the protection of the Tribe’s more than 200 archaeological sites. 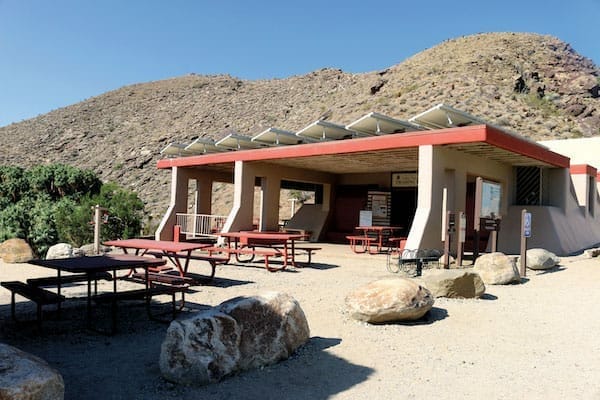 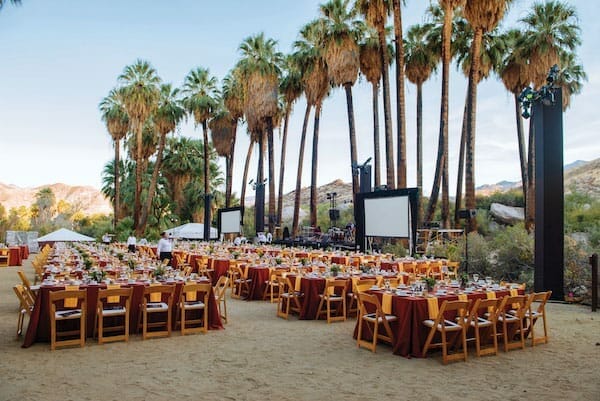 PHOTOGRAPH BY ETHAN KAMINSKY
Dinner in the Canyons, an annual fundraising event organized by the Agua Caliente Band of Cahuilla Indians, welcomes guests to the Tribe’s ancestral home each October.

In the 1996 book, The Heart is Fire: The World of the Cahuilla Indians of Southern California by Deborah Dozier, Cahuilla elder JoMay Modesto summed up her time-honored sense of responsibility to the land: “I can sit on a rock and think how many generations, how many hundreds of generations of Cahuillas have sat on that rock and thought, ‘This is mine, this is where I come from.’ Not ‘mine’ in the sense of possessing it, but ‘mine’ in that I am a part of it, my world. And to be able to know that it is going to be there. To maintain it so that five generations, 10 generations down the road, somebody will sit at that same rock and have the same feeling.”

Modesto’s words convey Native American resiliency, ingenuity, and determination—qualities gained over thousands of years of adapting to the desert and countless hard-won struggles. These strengths helped the Agua Caliente persevere in their commitment to protect the beautiful, sacred Indian Canyons that the Tribe chooses to share with visitors from around the world today.

This article appears in the Spring/Summer 2022 edition of Me Yah Whae, a publication of the Agua Caliente Band of Cahuilla Indians. To view the digital edition, click HERE