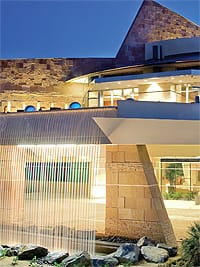 Indian Wells may only be 15.04 square miles, but what it lacks in geographical size, this upscale desert city makes up for in affording a superb quality of life and world-class amenities to residents and visitors alike.

“Indian Wells has undergone significant changes in the last five years to ensure that it remains one of the finest residential and resort destinations in the nation, without sacrificing the overall sense of tranquility that has long defined our very special community,” says Indian Wells Mayor Mary T. Roche.

To achieve this goal, City Council and Staff conceived and are in the midst of executing a comprehensive, strategic plan — unique for a city of this size — that leverages the city’s key assets and embodies the community’s shrewd leadership and “we-can-do-anything” spirit.

The metamorphosis continues to be nothing short of amazing. In August, the City of Indian Wells opened the IW Club, the final phase of an $80 million project to transform the city-owned, 36-hole Indian Wells Golf Resort into a mecca for premier golf and dining, and memorable special events. Designed by top golf architects John Fought and Clive Clark, respectively, the new Players and Celebrity courses have already garnered top rankings from Golfweek and other industry experts and lured the popular LG Skins Game to the public-access Golf Resort for three years. In November 2007, the Celebrity Course hosted the silver anniversary of this televised Thanksgiving weekend golf tradition and will do so again Nov. 28-30.

Visitors seeking a nostalgic taste of Indian Wells will find it at the Indian Wells Resort Hotel, overlooking the Santa Rosa Mountains and Indian Wells Country Club golf course. Hollywood icons Lucille Ball and Desi Arnaz built the intimate resort, which has been updated with the most modern conveniences.

Indian Wells is very often the community of choice for those seeking to relocate to the Coachella Valley. The city enjoys the benefits of being one of California’s wealthiest and financially well-managed cities and offers an unrivaled resident benefit program that includes spa, golf, and restaurant discounts; community socials and art lectures; and access to exclusive cultural activities. The city is also a major contributor to several valleywide academic institutions and nonprofit organizations through its Community Assistance, Cultural & Promotional, and School Grant programs.

Health and public safety remain a top priority. Indian Wells contracts with Riverside County for fire and law enforcement services and enjoys one of the lowest crime rates and quickest response rates in the valley. The city has been in the vanguard of many public health and environmental ventures; largescale recycling programs that encompass residential areas and businesses are among them.

To paraphrase a quote from Shakespeare: The entire world may be a stage, but Indian Wells will remain in the spotlight, now and well into the future.