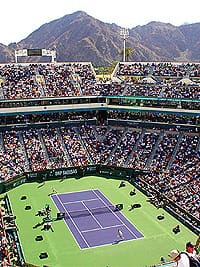 Summer socials and holiday gatherings, wine tastings and art tours, world-renowned tennis and golf tournaments. Living in Indian Wells is like being on a vacation every day of the year. In fact, Indian Wells mayor and 30-year resident Larry Spicer notes that residents frequently discover Indian Wells’ many charms during a leisure or business stay, return often, and then decide to relocate to this idyllic desert paradise.

In addition to world-class amenities — the award-winning Indian Wells Golf Resort and Indian Wells Tennis Garden among them — one of Indian Wells’ greatest assets has been, and continues to be, its visionary city government. Unlike most municipalities, the city’s governing body and staff embrace a private-sector business model that promotes innovation, fiscal responsibility, and environmental sustainability.

One recent example of the city’s dedication to “best practices” is the community satisfaction survey the city council commissioned earlier this year. The city contracted with leading independent research firm True North Research Inc. to implement the survey, which was designed to identify key issues of importance to residents and to gain a statistically reliable understanding as to how well the city was meeting resident needs in all aspects of city life.

The survey results were, in a word, phenomenal and reflect how diligently everyone at City Hall works to ensure a top-caliber lifestyle. The researchers at True North found that Indian Wells citizens were the most satisfied resident group that they had encountered in more than 100 similar studies completed for California municipalities.

Ninety-eight percent of the 400 city residents randomly polled were highly satisfied with the quality of life in Indian Wells. The majority of residents (86 percent) were also satisfied with the city’s efforts to provide municipal services, with 100 percent stating they were very pleased with the city’s efforts to provide fire protection and emergency medical services. Residents also gave top marks to City Hall’s efforts to reach out to them via diverse channels of communication — again, the highest level of satisfaction True North has ever encountered in comparable studies.

Moreover, while other communities have had to reduce city services due to the economic crisis, the City of Indian Wells has and continues to take proactive steps — such as reducing last year’s operating budget by $2.1 million and putting a temporary freeze on nonessential projects — to maintain short-term fiscal stability and future funding reserves.

Despite the cutbacks, Indian Wells continues to focus on public safety (the city boasts one of the lowest crime rates in the valley) and move forward on its GO GREEN program, a broad environmental initiative that encourages residents and businesses to act with a sustainable mindset and conserve local resources. “The City of Indian Wells takes being green seriously, and we make stewardship of our resources a top priority,” Spicer says.

Among GO GREEN’s many offerings are community recycling events, conservation incentive programs that help homeowners purchase energy-efficient appliances and reduce water use, and educational programs in concert with utility companies and environmental organizations. In addition, Indian Wells resorts have their own recycling projects in place, many of which include minimizing food waste.

This past summer, Indian Wells received two California Resource Recovery Association awards — the first for its annual citywide citrus collection project that benefits valley food banks and the second for reducing, salvaging, and recycling construction and demolition debris. And in January, Indian Wells became the first California city to join the LED City Program after the city partnered with Southern California Edison to convert much of the interiors of City Hall and other municipal buildings to energy-efficient LED lighting. Gov. Arnold Schwarzenegger lauded the city’s conversion to LED lighting, calling it “the type of aggressive energy-efficiency initiative needed to help California achieve its energy-reduction target.”

Another aspect that distinguishes Indian Wells from other communities is that this luxury residential resort destination offers one of the finest resident benefit programs in the nation. With a property owner ID card, residents enjoy select discounts and special events at the IW Golf Resort campus, a spectacular leisure and conference destination that caters to resort guests and residents. Four luxury hotel properties — Hyatt Grand Champions Resort, Villas and Spa; Indian Wells Resort Hotel; Miramonte Resort & Spa; and Renaissance Esmeralda Resort and Spa — conveniently border the city-owned Indian Wells Golf Resort. The public-access golf resort is home to the Celebrity and Players courses, both of which have earned top rankings for two consecutive years in Golfweek’s “Best Municipal Courses You Can Play” in the nation.

Residents and guests also partake in world-class amenities in the golf resort’s stunning IW Club, a 53,000-square-foot clubhouse that opened in August 2008. Past the desert modern sandstone-and-glass façade, visitors find museum-caliber original artwork, a spacious breakfast/lunch café adjacent to the natural-grass, 9-hole putting course, and a state-of-the-art golf shop and Callaway Golf Performance Center, one of only nine in the nation. A magnificent staircase leads from the lobby to the luxuriously appointed IW Club Restaurant and Bar, which features a temperature-controlled wine room, ample indoor/ outdoor dining area, and breathtaking golf course and mountain views. Add nearly 20,000 square feet of versatile event space and it’s no wonder that the IW Club has quickly emerged as one of the valley’s leading social venues.

The city, along with its resort and community partners, also hosts a lively array of resident events throughout the year. In addition to seasonal parties, these include Veterans Day and Memorial Day tributes; excursions to the U.S.S. Bonhomme Richard in San Diego, which participates in a triangular adoption program with the city and Gerald R. Ford Elementary School; a special residents’ day at the BNP Paribas Open held annually at the Indian Wells Tennis Garden; an exclusive Wildlights evening at The Living Desert; complimentary art tours at the Palm Springs Art Museum; and a free resident Movie Night featuring an award-winning film from the Palm Springs International Film Festival. This past summer, the city presented a July 4th celebration for residents and the public at the golf resort, and a plan is in the works for a winter holiday tree lighting celebration.

Said one resident who recently relocated from the Midwest to Indian Wells: “The people we’ve met have been extremely friendly, and this community has so much to offer, plus there’s nothing like dining outdoors on a gorgeous February night with our palm trees silhouetted against the stars.”