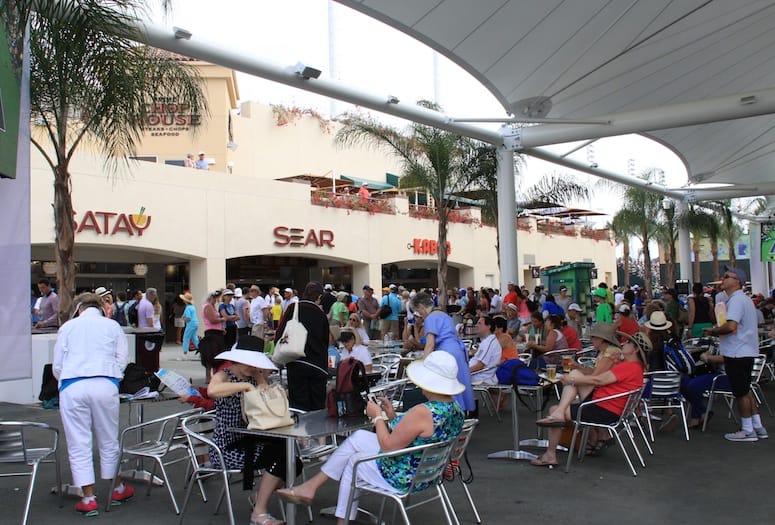 The main concessions at the Indian Wells Arts Festival will be located in the new Stadium 2.
Photo by April Graham

The opening of Stadium 2 at the Indian Wells Tennis Garden has created the opportunity to cook in actual permanent kitchens at the arts festival, according to Dianne Funk, festival producer.

“The presentation will be even more delicious and delightful,” says Funk.

Art fans can feast on a tantalizing selection of French-themed food inspired by the Objet Trouvé Found Art “festival within the festival.” In addition, the Eggs + Brunch in The Garden on Sunday picks up the French accent.

“This year with Object Trouvé Found Art Festival – which has the Eiffel Tower for a landmark – we have made the menu a ‘oui’ bit more French,” says Funk.

Objet Trouvé is the idea of using every day and found objects to create artwork, an art form that developed in turn-of-the-century Paris by such artists as Picasso, Marcel Duchamp, Man Ray, and others. Both organizations work with recycled or found objects and incorporate these concepts in school and community programs.

Hence, the idea to celebrate the beginning of the objet trouvé movement with a French-themed festival seemed a natural, says Funk.

The newly expanded Indian Wells Tennis Garden offers much more shaded dining and seating areas near the new Stadium 2, plus the new Tommy Bahama Bar will be open for the festival.

The garden is transformed into an artisan village where more than 200-juried artists show and sell their artwork. Live entertainment all day, demonstrations, interactive displays, and kids’ activities are part of the festivities.  And, of course, food!

The Fare
The main concessions will be located in Stadium 2 offering such gourmet specialties as an imported and domestic cheese board with Jarlsberg, dill Havarti, sharp cheddar, dried fruits and gourmet crackers.

For quick and easy snacks, there will be fun kabobs such a fruit and dessert skewer, stuffed waffles on a stick, and various flavors of fudge puppies.

The Drinks
The Tommy Bahama Bar will be open during the festival offering domestic and imported beer on draft, California wines by the glass including chardonnay, sparkling brut and rose, and the Hummingbird, a champagne cocktail with St. Germain Elderflower and a soda spritz.

Throughout the grounds will be Italian lemon or orange ices, iced mocha drinks, fresh squeezed lemonade, juices and coffees.