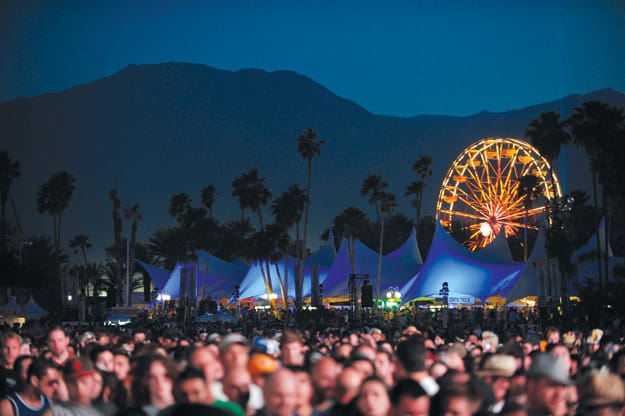 If we’re in Indio, it must be “Coachella.” While it’s undeniable that the inaugural Coachella Valley Music & Arts Festival put Indio “on the map” in 1999, there’s so much more to do and see than listen to the hottest bands under the sun in this city that bills itself simply as “the place to be.”

First off, there’s the Stagecoach country music festival, which shares the same setting as Coachella on the lush grounds of the Empire Polo Club (1) . These two musical extravaganzas — alongside other popular events such as the Riverside County Fair and National Date Festival, Southwest Arts Festival, and International Tamale Festival — earned Indio its nickname of City of Festivals and draw more than a million visitors annually.

Other beloved attractions include Fantasy Springs Resort Casino (2) , the Coachella Valley History Museum (3) (which pays homage to the desert’s unique history and that of its early pioneers who soldiered on through the punishing landscape to craft the place we adore today) and its new Date Museum, the Coachella Valley Wild Bird Center (4)  (a nonprofit created to rehabilitate orphaned, injured, or sick native wild birds, with the end goal being to release them back into their natural habitats), and the Cabazon Cultural Museum (5) (where admission is always free). The Indio Chamber of Commerce offers self-guided tours of Indio’s many murals (6) , a series of 12 outdoor panels commissioned to depict the city’s history and pay tribute to its people.

Indio is the largest and one of the fastest-growing cities in the Coachella Valley and the second county seat for Riverside County.

Tips & Fun Facts
■    The Indio Municipal Golf Course is the only place in the valley where golfers can play at night.
■    Indio is home to award-winning teen and senior centers.
■    The increasing popularity of the Coachella Music & Arts Festival has caused concert promoters to offer unprecedented identical weekend concerts in 2012: April 13-15 and April 20-22. www.coachella.com
■    “Indio” is Spanish for “Indian.”
■    A not-to-be-missed short film, The Romance and Sex Life of the Date, screens continuously every day at Shields Date Garden on Highway 111. www.shieldsdategarden.com