Innis Casey Captures in Photos How the Pandemic Drove Us Indoors 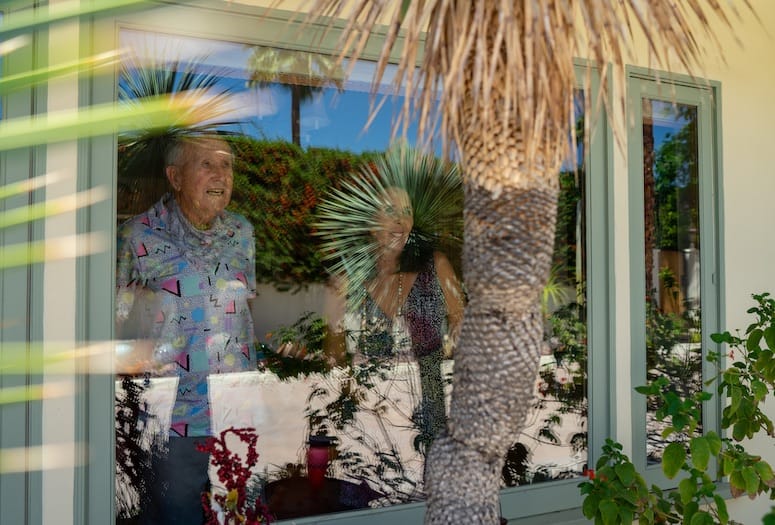 Photographer Innis Casey took several photos for his book in Palm Springs, including this one of Stephen Moses and Julie Varon.
PHOTOGRAPHS COURTESY INNIS CASEY

Their contact usually came on holidays or birthdays. Often by phone. Kimberley Lovato was six years older than her stepbrother Innis Casey. Their relationship as siblings tied to having the same father.

“Once we became adults, we didn’t have that gathering spot anymore,” Kimberley says.

“We were not really close,” Innis says. “And now I’m talking to my sister daily and it’s so fun. It’s been such a gift for myself to get to know my sister for the first time.”

What brought them together was the shutdown. Ironic considering it’s been such a time of isolation for many of us. But that was the point. Back in March 2020 when the first shutdown occurred, Casey watched his usual bookings of photographing weddings, bar mitzvahs, and family portraits, begin to disappear from his calendar. He took a walk one day to get out of the house and brought his camera, and began taking photos of his neighbors cooped up at home coping with the outbreak of coronavirus.

He quickly realized he wasn’t just shooting photos. “The more I started kind of just resting with the idea that we were all in this and this was an across-the-world thing,” Innis says. “This is this crazy moment in time. Even though it's my neighborhood, this is a one little teeny piece of my world here in Los Angeles and my lens kind of recording history.”

He began posting his photos on social media, and that’s where Kimberley first saw them. “I loved what he was doing,” she says. “I thought it was so clever. So, I actually contacted him and said, ‘Hey, these are great. Have you ever thought about putting them in the book?" And he's like, ‘I have, but…’” 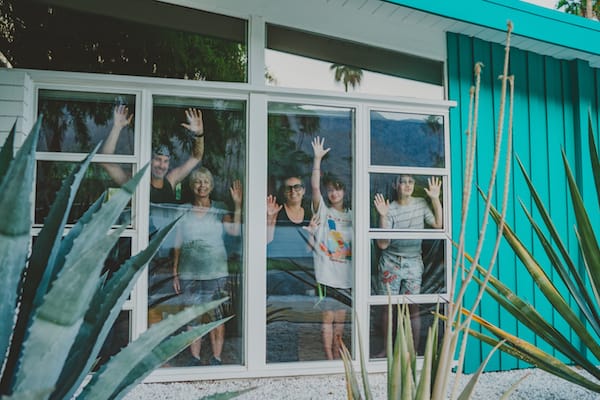 The Lucio family in Palm Springs.

That began their collaboration on what would become Quartraits: A Portrait of a Community in Quarantine, featuring a cross-section of Southern California people, including several from Palm Springs where Casey’s mother resides. Lovat provided the words and brought book publishing experience to the table from her job as a travel writer.

• READ NEXT: 5 Greater Palm Springs Artists Brings Their Crafts to You.

“Working together, I realized how similar we are,” Lovato says. “We're both creative. We have a very similar sense of humor. We have a really good collaborative working style. He's much more of the, ‘I’m going to go shoot some photos and…’, and I'm more like, ‘Let's put it all in a spreadsheet because I've got to keep organized, and let's have a deadline, and let's hit these milestones.’ And so, we actually worked really well together, and yeah, our relationship grew closer too, so win-win.”

Casey and Lovato chat about the challenges of creating the book and shooting in Palm Springs.

When did you realize this could become a book?

Innis: The idea of it came about three weeks of just shooting in and around my neighborhood. And then the more I started posting, the more my friends and family were, “Oh, this is great. Can you by my house and do it, noon tomorrow, we'll all be out in the front yard, you grab a picture off the front door, or whatever it may be." And literally I had a piece of paper in my car and I was just jotting them down. And it was very unorganized and very organic in that sense.

Did you find most people were receptive to having their photo taken?

Innis: Yes. And I think some of the great things were people telling me, "Oh my gosh, this gave us something to look forward to." We’re actually going to get out of our sweat pants for the day and dress up, or I'm going to actually do my hair or you know what, come on by. I would love a shot. We're going to sit in our PJ's right now. So I said this portrait could be whatever you want it to be. But whatever it was, they knew three or four days out in advance. They had a plan. They looked forward to it all week, some people told me. 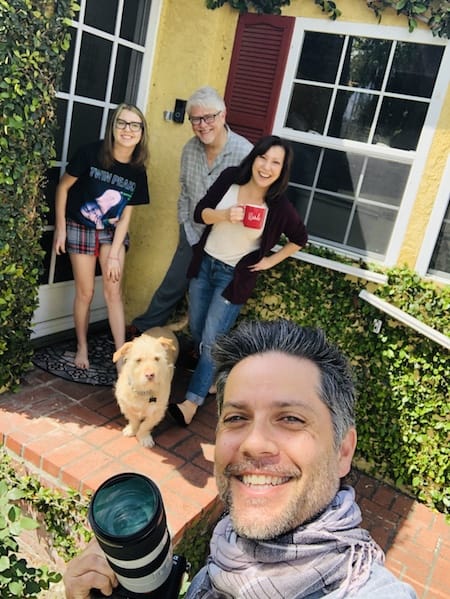 Innis Casey with his subjects.

When did you come out to Palm Springs?

Innis: It was about the end of April. Palm Springs is very dear to me. My mom lives there. She's been there for 10 years now. And I try to get down there whenever I can, obviously, because I love a great home cooked meal, a free place to stay. She's in one of the William Krisel homes. It's been on the Modernism Week tour now, two years in a row. So it's a wonderful place right in the Twin Palms area. While I was there, I called my friend Kellee McQuinn, who I love from doing work in the past. And I know she's there and I just went, "Oh, I'm coming over." And then I started rounding up anyone I kind of knew friends of hers. They all loved the idea.

Were people as receptive to sharing their stories?

Kimberley: We interviewed about 130 people and used 107 in the book. And I think out of all those people, only one person said, "These questions are too personal. I don't want to answer these." And I said, "Okay." But everyone else was so forthcoming, and I don't think they had an idea of what it would look like in the aggregate, in a whole, ... we had so much. I could have written a book on every person. They had so much detail. Some people talked for hours or wrote me pages and pages of stories and I wish I could tell them all, but we wanted to kind of give a whole picture. So, that's why there's little pieces of what people said. 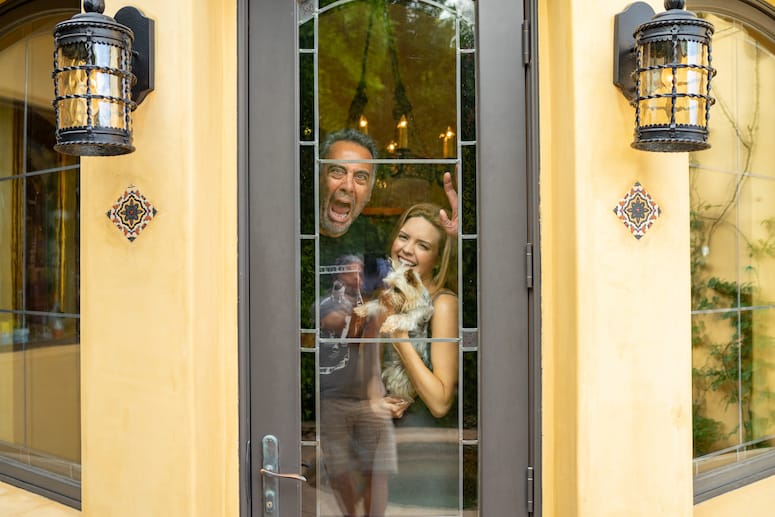 Celebrities in the book include Brad Garrett and Eric McCormick.

When you heard their stories, did you see similarities with what you were experiencing with the shutdown yourself?

Kimberley: I had it really easy because I don't have young kids at home that I'm dealing with homeschooling. I've been fortunate to be healthy. My family's been healthy. So, as far as sheltering in place, I've had it easy because I haven't had to go into an office. I'm not a nurse where I'm going and seeing, dealing with that risk every day. I actually felt an overwhelming gratitude of my situation every time I talked to them. But then, just really impressed at how strong some families are and how resilient some families are, just to be able to do this every day and still come home and put dinner on the table and help their kids with their homework. Yeah, it definitely made me feel grateful for the situation that I'm in. 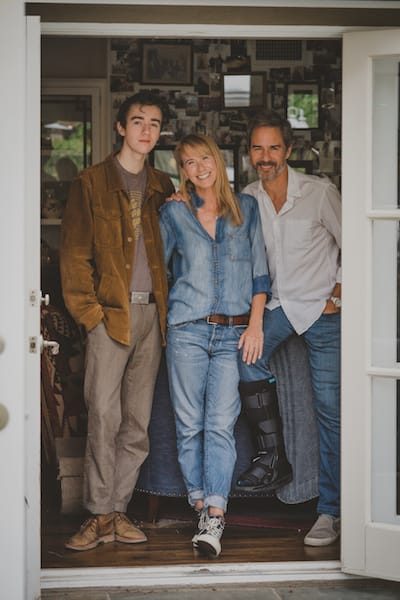 Innis: I was quarantined myself with my ex-wife and my son and we all had to be careful, but I had to be even more careful. My ex-wife was diagnosed with breast cancer in February and they started chemo in March. All of a sudden quarantine happened. I was, "Well, who's going to be here?" because her family's all back East and they weren't going to travel. And that was that. So it was a crazy time.

And I want to say doing these pictures in this book, everything that came with it kind of saved me. It gave me that escape when I needed to just get out and create and get away from the house. So that was really important. Even though it was from the far, I still could hear their faces and see their smiles and see the joy that they got by doing these shots. And it just filled me up.

I see there are some celebrities in the book —Brad Garrett, Eric McCormick, Weird Al Jankovic, and Danny Trejo. How did that happen?

I do work with a lot of actors and managers and do a lot photos in that area. The studios are my backyard. So the more people that saw what I was doing, celebrities started coming into the mix, too.

What was your favorite shot?

Innis: There's a shot of a little boy named Noah in the book. And I went to their family house to take their portrait. When I showed up at the house, there's this track, sidewalk track everywhere of this boy named Noah, who had on a big superhero paint mask and Superman painting on the sidewalk and balloons everywhere. I was like, "Wow, this kid's a celebrity.” I was only there maybe a half an hour, he had neuroblastoma, I believe it is brain cancer. And he was expected not to live during this quarantine time. And this was probably going to be one of their last shots as a family together. I'm actually getting emotional because Noah's not here anymore.

There's another great shot of a family. They had this old 1957 car sitting in the driveway. The tires were flat. I said, you guys, I want you all to come out and get into the back of that car and lock yourself in and look out the back window. And they're like, "Really? We haven't opened up that ESCO in like three years." And they were so excited.

• READ NEXT: Palm Springs Gives Robert Longo an Escape From the Image Storm That Drives His Art. 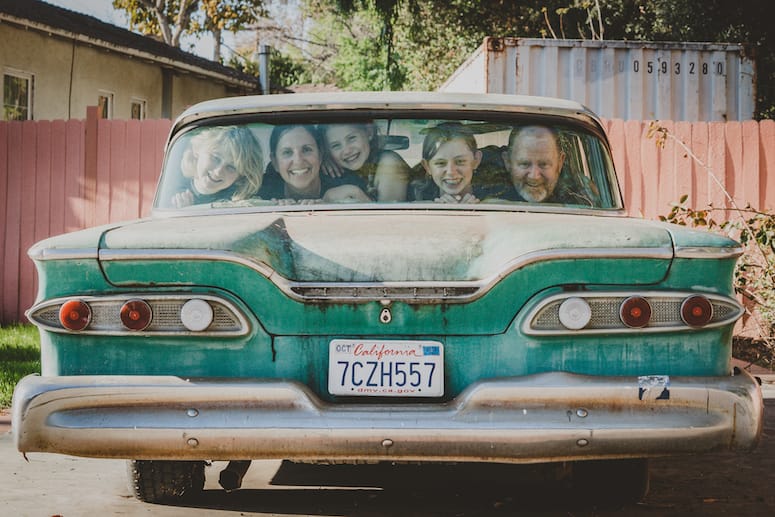 One of Innis Casey's favorite photos was the Connery family crammed into this 1957 auto.

What about the book will resonate most with people?

Kimberley: We're all human in the end, and we are not above this. No one is more resilient than another person in terms of health. We're all susceptible to this and we have all figured out that we have to manage as humans and be kind to one another.

How did this book change you as a photographer?

Innis: While I was shooting, I was also really finding myself, seeing things in a new way that I hadn't before and really appreciating the landscape and the architecture of a window of a piece of glass or some steps or fence. I was seeing in a new way because I couldn't enter and walk in and do the things I would normally do.

Will you collaborate on another book?

Kimberley: I would love to work on some kind of book with him again. I think he's a great photographer. Again, just because of our work styles are so easy. Innis makes people feel really comfortable. He's really good at that. So, the fact that, no joke, when I said everybody loves Innis, it's true. Everyone I talked to is like, "Oh my gosh, I love your brother. He's so nice." I think 99 percent of the people I talked to said something positive about Innis, which, how often do you get to work with people like that?

Innis: We're talking about maybe doing Mexico City at some point, when this thing around the world can come to an end and we can actually start to travel again. It would be awesome. I lived there for about six years. I had a music career down there. I want to go back so bad.