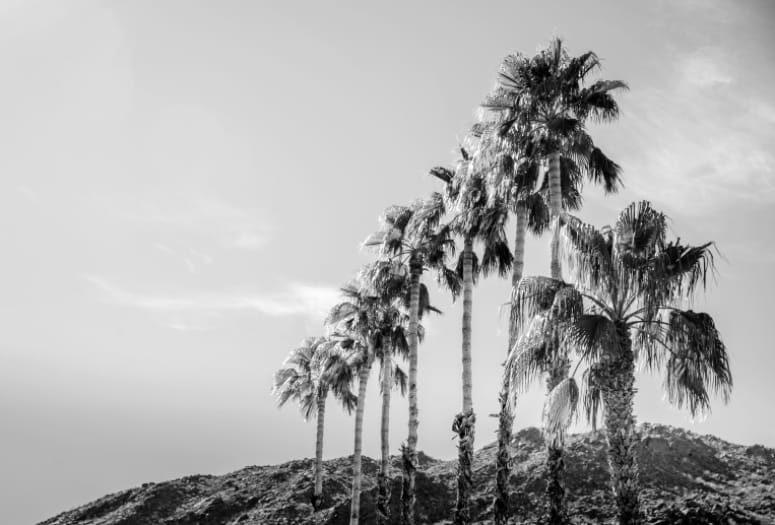 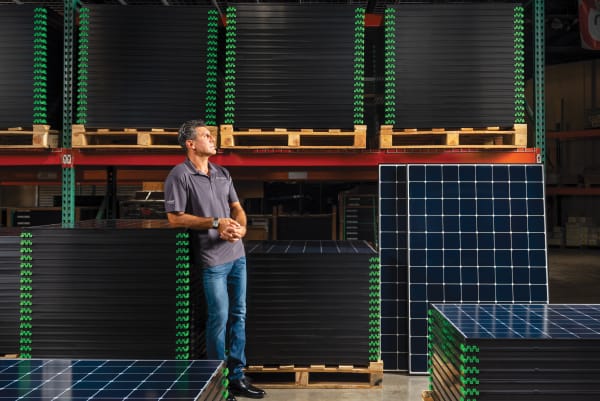 Power to the People

I was having a glass of wine at a bar in Palm Springs, thinking about when I lived in Russia and how inefficient their utilities were and I thought, That’s not the way it is in the U.S. But when I looked around, I saw that the utilities were controlling everything, even though we had solar technology, which meant that you didn’t have to tether everything to a large, centralized utility system. I thought, Why wouldn’t you want to generate your own energy in your home? That’s the idea from which Renova began in 2006, when I was finishing my masters at UC Riverside.

A couple of days after I graduated, in 2007, we began Renova with three people. That year we did only about $300,000 in revenue. This year we’ll do about $42 million. What I had to figure out was, if this idea is so good and we have the technology to do it, what’s holding us back? I concluded that it was a psychological hurdle. How do we get people to feel like they can depend on the ability to generate their own electricity, and why is it that they’re not? It was because of the roadblocks put up by the utilities, coal companies, and railroads. Forty percent of what the railroads ship is coal, and they have a strong lobby.

But people are starting to get it. Within five years, half the people in Southern California who change their residence will have a solar system with a battery system attached to their home. It’s changing faster in the Coachella Valley. While only about 2 percent of households in Los Angeles have solar, Rancho Mirage is at about 14 percent and Palm Springs is close to 15 percent.

I was lucky to start my business in the Coachella Valley. We have 162 employees, and there’s an army of talented people wanting to work for us. It’s been a steady, organic growth. Our costs are lower, and our employees live in homes that cost less than elsewhere in Southern California so they have a better life. I’ve built a model that I can take elsewhere because this region allowed me the opportunity for slow and positive growth. This is the best place in California to start and grow a business. 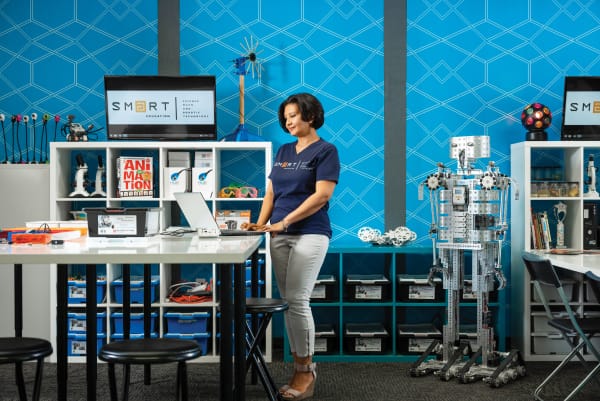 I grew up in the Coachella Valley and, like a lot of kids, I wanted to go someplace that was bigger and more exciting so I went to college in San Diego. That was a rude awakening. Along with “bigger” and “more exciting” comes life on the freeway and a more expensive standard of living. It was a different life, and it wasn’t until my husband and I found out we were expecting our first child that we realized we didn’t want to start a family in a big city and started thinking about how the Coachella Valley was a good place to raise a child. So that’s what brought me back.

I got involved in my kids’ schools and saw a need for more STEM (Science, Technology, Engineering, and Mathematics) education. So eight years ago we founded SMaRT, a nonprofit organization dedicated to improving access to STEM classes for kids in kindergarten through high school in the Coachella Valley. At this point, all three school districts, from Desert Hot Springs to the Salton Sea, have embraced STEM education and that was due, in large part, to us as well as our partner organizations like Spectrum, which has provided funds to fully outfit a classroom at Palm Springs Air Museum to allow students to experience a science and technology lab.  It’s inspiring and exciting to be a 10- or a 12-year-old and have free access to whatever might interest you, whether it’s robotic equipment or microscopes, and be told to pick it up and play with it.

We’re about providing kids with opportunities. The earlier a child can get a microscope in their hands, the less scary the microscope will be when they’re exposed to it in high school biology or chemistry. We’re showing them how exciting the sciences can be in a practical, hands-on way, and they say, I’m good at this. I could do this. This could be a career for me. It’s amazing the impact this can have on kids.

It’s been a community effort. I’m constantly telling people about how Coachella Valley Economic Partnership supports entrepreneurship. SMaRT wouldn’t be where it is today if it wasn’t for CVEP’s help, from the office space to the mentoring, there’s support in so many different ways. 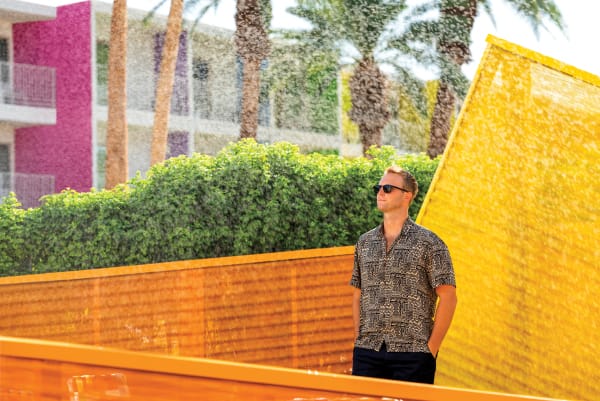 I was finishing college and thought, What am I going to do with my life? Around that time I noticed that the city of Palm Springs was making a push for young people to visit during spring break. So I thought, Well, that’s interesting. Because when I was growing up in Palm Springs, it seemed like the city didn’t want college-aged kids in town. Then I heard that a bunch of hoteliers and business owners had formed a group called PS Resorts and they were looking for events for the summer to make Palm Springs more of a year-round economy. I thought, Wow, if Palm Springs wants young people and summer events, I can do that. I just needed an event that was attractive enough to draw younger people to Palm Springs. That was the seed that started Splash House.

I spent my last three months at UCLA thinking about this and believed that I could put on an event centered around music while taking advantage of one of Palm Springs’ greatest assets: the resort poolside lifestyle. Even though I didn’t have any experience with music festivals or concert promotions, I knew I could do it and I knew it would be unique. So my whole family got behind my idea, and we formed a business to do this and we went for it.

That was in 2013. About 600 people came out and we lost a hell of a lot of money, but at the same time, the reaction was incredible. Those 600 people included an influential crowd of tastemakers and music industry people, and everyone said they had an amazing time and we had to do it again. So we had to figure out how to make it successful from a business standpoint. Then I got a call from Skip Paige [former COO] of Goldenvoice inviting us to partner up. They had the infrastructure and resources and the team experience to get us where we wanted to go with Splash House and everything has taken off since then. We’ve completed our sixth year and grown from one weekend to two, and now we’re at the Riviera, Renaissance, and Saguaro, which is collectively about 6,000 hotel rooms that we buy for the two weekends in June and August, plus our night venue, the Palm Springs Air Museum. 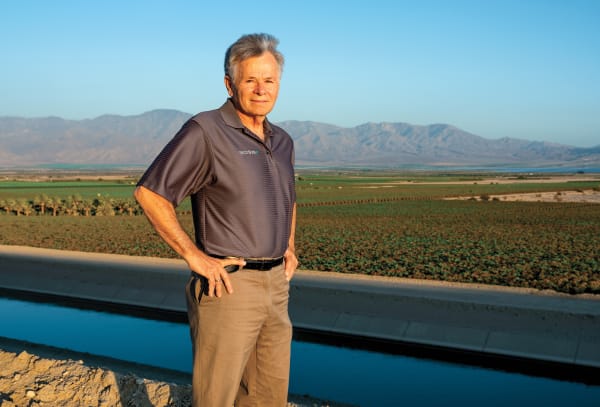 An irrigation controller is great, but do you know how to program it? No. You want it to be like a dishwasher: Push a button, walk away, and everything is fine. That’s where we’re headed for everything in our home, including monitoring water usage, which is what we do.

Right now, you get a bill and the best you can do is figure out if you used more or less water compared to previous months. But that doesn’t tell you anything about what you did last Thursday or Friday. We’ve developed hardware and software that talk to each other so you can understand your water usage — whether you run a golf course or own a farm or manage a homeowners association. The primary influencer for water conservation is customer behavior. For consumers to modify their behavior, they first have to understand what’s going on with their water and, in general, they have no idea.

The world is changing dramatically. Particularly in the last three years. It started with the Internet of Things. That’s when battery- or low-powered devices were developed that could sense almost anything. You build a little gizmo that pulls in data and sends it to a controller like a Nest learning thermostat. We call ourselves the Nest of the water world, but it’s more difficult because Nest lives in a plug-in world while your water meter is out by the sidewalk somewhere. It needs a way of receiving data without running a wire to your meter. We’ve created a technology that turns your meter into a device that runs on batteries for many years while providing the data to make water usage a part of the smart home.

I started the company in San Diego but moved to the Coachella Valley because it has more than 500 homeowner associations, 124 golf courses, and a huge agricultural presence. There’s large water use, and all of the water comes from the ground, so water management will be critical in the years to come. We built our platform around the same technology Spectrum has embraced in the Coachella Valley to create smart cities. The region is positioned to leverage that in ways that few other cities and communities can.