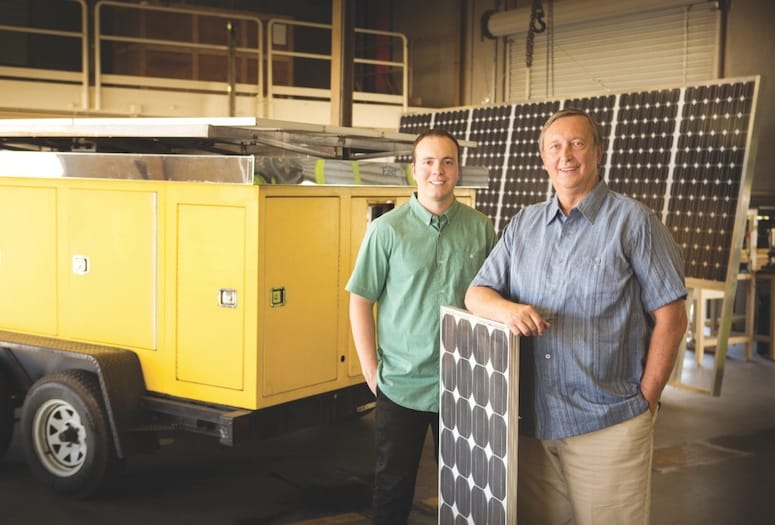 By the time Bob Kunesh was ready to expand his Los Angeles-based business after 25 good years, plenty of suitors tried to woo him. “I was invited to Texas, I thought about Arizona, and I had an opportunity in Nevada,” says the owner of Sactec Solar. “Places were offering me free rent, but they weren’t offering me the kind of total support I found in the Coachella Valley.”

“I found a good reason to spend more time in Palm Springs, where I get the most enjoyment,” says Kunesh, who’s moving into the home he purchased in town five years ago. “What’s being done for small businesses here is more than I’ve seen anywhere else. Other cities might have great sales talks, but they don’t have the people and the organization to back it up.”

Kunesh is one of an increasing number of entrepreneurs from California and beyond packing up and heading for Greater Palm Springs. The region offers many reasons to incubate or relocate a business in the region. “First, we have a relatively low cost of living compared to the coast,” says Joe Wallace, interim CEO and president of the Coachella Valley Economic Partnership, which manages the Coachella Valley iHub. “We’re more like the Midwest than L.A., San Diego, or Silicon Valley.”

Transplants find relative bargains in the real estate market — and enjoy the added value of mountain views and natural splendor. Short, straightforward commutes and an enviable climate most months of the year add to the quality of life that distinguishes the region, Wallace adds.

In addition to livability, Kunesh appreciates the region’s longstanding interest in the products he delivers. “It’s a truly inviting place for anyone in the solar business, because it’s valued here,” he says.

“Solar wasn’t invented here,” Wallace says, “but with 360 days of sun, it is the perfect place and proving ground for early adopters. It will do the same thing for battery storage and other technologies.” Kunesh credits the iHub with helping him win the Emerging Entrepreneur honor at the 2013 Spirit of the Entrepreneur Awards presented by the Inland Empire Center for Entrepreneurship at California State University San Bernardino.

In recent years, companies taking residency in the iHub operate in industries critical to the region, especially renewable energy, healthcare and medical technology, digital media, and high-tech and advanced manufacturing.

“If someone wants to develop an elective medical device for the affluent, we have that market,” Wallace says. “If your target is people of lesser means, we have that, too. We have a strong cross-section of America, which makes us a good test market.”

Wallace encapsulates the program’s success for the iHub’s first 32 companies in one impressive number: their collective valuation of $100 million.

“We look for people with big ideas and big ambitions,” he says. “We look for companies that will create jobs, wealth, and opportunities for the coming generations.”

As one of 16 innovation hubs in California, the Coachella Valley iHub’s programs, services, and incentives (though not direct funding) for start-ups combine with office space, a conference area, and professional consulting to support growth and success.

Once startups prove their concepts, they can transition from an office to this site for small-scale manufacturing.

“We weren’t planning to launch a new company, but the iHub made it easy,” says Deena Suffin, co-owner of Post Modern, which has its office in the iHub and manufacturing space at the Accelerator Campus. Suffin managed a Los Angeles marketing firm for almost 20 years before considering a start-up. Founded in 2011, Post Modern uses patent-pending technology and on-site photo kiosks to help companies create custom social media campaigns during trade shows and events.

While quality of life drew Suffin and her partner, Jane Shore, to Palm Springs, Suffin says the iHub staff made them feel at home, helping them establish relationships with vendors, manufacturers, labor, and most importantly clients. “The iHub has put us over the top,” she says. “It’s very hard to start from scratch and keep the momentum, but their support has really reinvigorated us.”

Suffin and Shore reflect another trend that Wallace says goes underappreciated in the desert communities. “We have an abundance of people over age 40 who came out here after being successful entrepreneurs,” he says. “They may have come for fine food or golf, but an entrepreneur is not a mind that can be without a task. Eventually they’re looking to start a business.”

At the iHub and Accelerator Campus, entrepreneurs have access to services and mentorship that mitigate the risk of entrepreneurship and help them operate efficiently.
“It’s been an ideal environment for growth and improvement — more than I ever expected,” says Kunesh, who learned about the iHub through Bill Schlanger, owner of EV Enterprises, who moved his electric car conversion firm from Arizona to the Coachella Valley in 2012.

“We’ve been given goals and direction. We’re hired some people, and we can build the company to a much larger size here,” Kunesh says. “There’s a kind of optimism here. The iHub has brought us publicity, education, and potential investor support. It’s an excellent place for small tech businesses to bloom.”

Even virtual companies with a fundamental reason to relocate one day rely on iHub programs and services remotely from Indiana, Germany, and Switzerland.

The innovative fashion accessories firm hipS-sister gained traction by moving to the iHub from San Diego. Priatas, which makes disposable and recyclable products for the biomedical research field, launched at the Accelerator Campus’ fledgling Health and Medical Innovation Center, although its founder, Dr. Allan Wu, commutes from his job as a chief scientific officer in Riverside.

“One of the advantages of being in the iHub is being able to tap into the other technological innovations that are taking place here,” Suffin says. “Some of our circuit boards on our Version two kiosk are manufactured here. We’re also investigating the idea of putting a solar panel that would be manufactured here on top of our kiosk so that we can go totally wireless.”

Given the breadth of companies within the iHub, business objectives vary. From its inception, however, companies have found a proclivity for working together. “We’re sharing experience and technologies and supporting each other as we develop our own companies,” Kunesh says. “When you have three or four businesses that find common ground and can add to each other’s products and ideas, it enhances all of us.”