Rice Finds Her Inspiration in Breakfast 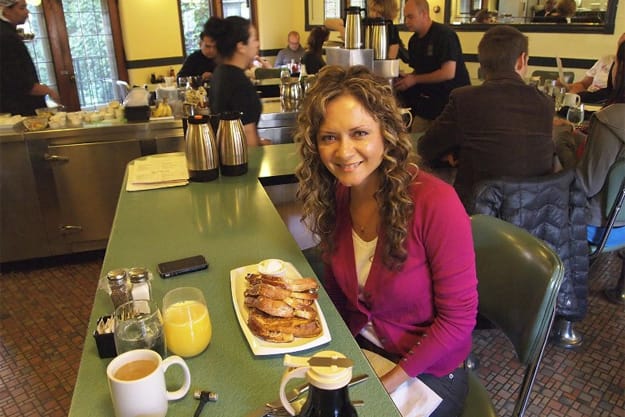 If money were no object, what would you do?

Palm Desert's Lee Rice asked herself the same question while on a lunch break during the summer of 2011. Her answer?

All of the above.

“I had a ‘Groundhog’s Day’ moment,”  said Rice, who is a communications and public relations specialist at Eisenhower Medical Center. “I was on my lunch hour and felt like I was just in that daily grind doing the same thing day after day. I started thinking about the people I admire, the people I wanted to emulate, and I realized those people have all gone after ‘it,’ whatever ‘it’ was for them.”

And for Rice, “it” was traveling the world, eating at the best places and writing a book.

She decided not to wait for money to become no object. Instead, she’d fit her dreams into her reality.

“I knew I wanted to travel, eat and write, but I still had to pay my bills and go to work. Instead of traveling the world, I decided to start with America since I haven’t even seen all of it yet,” Rice said. “And I decided to do breakfast since it’s the cheapest meal.”

Rice launched a blog and Facebook page for her culinary quest, dubbed “Little Lee’s Breakfast in America". Through polls on her Facebook page, followers choose the 52 restaurants (one for each state, except California and New York where Rice will dine twice) for her to try.

Once a winner has been decided, Rice visits the restaurant, tastes a signature dish and presents the owners with a certificate. Afterwards, she writes about the experience on her blog.

Her first trip was in October 2011, leading Rice to a plate of homemade sausage at Helen’s Sausage House in Delaware. Since then, Rice has eaten breakfast in 12 more states, scheduling trips around her full-time job in the desert.

Some of Rice’s most memorable breakfasts include shrimp and grits in South Carolina, orange zest cranberry pancakes with orange marmalade butter in New Jersey and vanilla malt French toast with Chantilly cream and banana milk jam in Milwaukee.

“It’s been great,” Rice said. “I have my profession and now I have my passion. It’s filled the part of me that was missing. Literally.”

After finishing her journey to 52 breakfast restaurants around the country, Rice hopes to release a book. In the meantime, fans can read about her recent breakfast adventures on her website, leeeatsbreakfast.com.

1. La Quinta Baking Company: “The dish that knocked my socks off is their croque monsieur. It’s just heaven on a dish. Ham, swiss cheese and béchamel sauce on toasted French bread.”

3. Keedy’s Fountain & Grill, Palm Desert: “I don’t fool around with their pancakes because they are so good, you don’t want to mess with them. All you need is maple syrup and butter.”