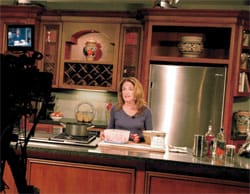 After a year of molecular science research in Paris, Cointreau unveiled a solid “pearl” form of its orange liqueur at an invitation-only event at the Skyroom of the New Museum in Manhattan, N.Y. Dubbed “Cointreau Caviar,” the edible flakes of 24K gold are designed to be served with upscale Cointreau cocktails either on the side or suspended in the drinks. Initially available only in London, Paris, and New York, Cointreau Caviar is expected to spread to trend-setting bars around the world.

Rémy Martin commissioned famed photographer and director David LaChapelle to create artwork for its first limited-edition V.S.O.P. cognac bottle. LaChapelle drew from his experience choreographing music videos for artists from Jennifer Lopez to Gwen Stefani for the vibrant, multilayered composition of a woman dancing against a jungle backdrop and a leopard leaping through the air. Only 150,000 bottles will be available beginning this month.

This month, the Cattier Champagne house in Reims, France, debuts its Armand de Brignac blanc de blanc in an antique silver bottle with pewter labels. Cattier, with fewer than 20 employees, first released brut in a gold-plated bottle and, recently, a rosé in a pink-gold bottle. Each bears a pewter label and comes in a velvet-lined, black lacquered box. The brut sells for $300 and the rosé and blanc de blanc for $500. Armand de Brignac is served at Le Moulin de Mougins on the French Riviera.

Gourmet ingredients from foie gras to fungi take center stage June 15-20 during the inaugural Palm Springs Restaurant Week. Popular in cities from New York to San Diego, Restaurant Week offers food lovers an opportunity to enjoy premium dining venues at a lower-than-usual price. In 2007, more than 200,000 diners took advantage of San Diego’s third annual event. That city is also hosting a Restaurant Week this month — its second one for 2008.

Locally, a three-course, prix fixe menu from any of more than 30 participating restaurants will cost $26 or $36 per person (excluding beverages, tax, and tip). Chefs may add a fourth course, wine pairing, or other offering if the average cost is below $30. The event, organized by the Palm Springs Restaurant Association, requires reservations but no tickets or passes.

“Palm Springs has such a wealth of chef-owned and -operated restaurants,” says Michael Estrada, owner of The Falls Prime Steakhouse and Matchbox Vintage Pizza Bistro. “And these days, with so many people making vacation decisions based on food and wine opportunities, Restaurant Week provides a great opportunity to showcase what Palm Springs has to offer.

“It’s also a great way for restaurants to give back to the community,” he continues. “When else do people have the opportunity to go out to dinner for six nights in a row, simply because the restaurants make it affordable? It also becomes a little competitive between the chefs, because each one wants to create a great menu and offer a great value. Our goal is to serve 25,000 to 30,000 meals between the restaurants during that six-day period.”

If the event seems too indulgent, consider that a dollar from each dinner served during the week will be donated to Angel View Crippled Children’s Foundation, a nonprofit organization supporting physically and mentally challenged youth.

For a list of participating restaurants, visit http://www.palmspringsrestaurant-week.com.
— S.R.

For What It’s Worth

For Jonathan Weedman, the purchase of movie props 26 years ago marked the beginning of a beautiful relationship. The props — three chairs from the set of Rick’s Café in Casablanca — will see the spotlight again on Antiques Roadshow, the nationally televised proving ground for supposed treasures of the past.

On June 7, Antiques Roadshow visits Palm Springs, where the winners of 250 pairs of tickets will have an opportunity to have items appraised. The show will visit six cities for its 13th season airing in 2009, beginning June 7 in Palm Springs.

“They will tape three episodes here of one of the most popular programs on PBS,” says Tom Moore, executive director of development for KCET Desert Cities. “It is a great opportunity to raise the profile of Palm Springs and the Coachella Valley with 10 to 11 million viewers around the country who tune into each episode.”

While many Roadshow guests submit items that have been in their families for generations, Weedman found his in 1982 when he heard that Omega Cinema Props was selling off its inventory of Hollywood artifacts.

“I didn’t have any money, but I went anyway,” he says. “This huge warehouse was filled with costumes, artwork, bric-a-brac, and in the corner they had about 50 of these beat-up rattan chairs for $30 a piece. I bought four for $120, and they gave me a little piece of paper saying that these were the actual chairs used in the café scene in Casablanca.”

While some Roadshow guests walk away disappointed, Weedman has high hopes. “A few years back, one was auctioned off at Sotheby’s for several thousand dollars. The ones I have are quite old and beat up, but they have a very distinct design,” he says.
— Sarah Reiss

Kris Capra lifts a glistening ball of buffalo mozzarella from its brine and into the glow of stage lights. “Look at that,” she says. “Have you ever seen anything so gorgeous?” The camera pans in to a tight shot of the pearlescent round as she prepares the simple caprese salad that has inspired command performances around her own kitchen table for years.

Capra has been cooking daily at Casablanca Studios in Desert Hot Springs for six episodes of a television show to air on KCET Desert Cities, the local PBS affiliate. Now she awaits word on when Easyway Gourmet With Kris Capra will hit the air.

Capra, who also writes and produces the show with her husband, Tom, epitomizes next-door-neighbor accessibility. A television and documentary film producer by trade and an unabashed foodie at heart, she never longed for the spotlight until her retirement, when friends and family urged her to share her straight-forward gourmet approach on television.

Outfitting Casablanca Studios with a kitchen for the show became a community project. “Spectrum Custom Cabinets designed and custom-built the set for the show, Ferguson donated all the appliances and bent over backward to make sure everything was just right for the shoot,” says Leanna Bonamici, who runs Casablanca Studios and produced and directed the six episodes. “So many people came to the table on this. Jan Boydstun from Kitchen Kitchen donated thousands of dollars worth of gadgets and pans. Barilla Pasta, Northstar Farms, PrimeTime International — all these wonderful companies donated their products and services for the shows. It’s a great community.”

On the set, Capra carries on her love affair with fresh basil, artisan cheeses, and olive oil in front of cameras, crew, and, she hopes, before long the watchful eyes of desert cooks.
— Sarah Reiss

Al Geiberger, pro emeritus at Stone Eagle Golf Club in Palm Desert, holds a special place in the history of golf. Thirty years ago, Geiberger was the first player to shoot a 59 for 18 holes in a PGA Tour competition. He did it on a long (for that time) course of 7,249 yards, at the Colonial Country Club in Memphis, Tenn., on a 98-degree day.

Eleven times Geiberger took home the winning trophy on the regular tour and another 10 times on the senior tour. That’s certainly respectable, but it’s the record-setting 29-30 we still talk about.

Unfortunately, his life was not all victories. His game could vary unpredictably from the searing hot 59 to an ice cold 80 in a matter of weeks.

Stone Eagle is somewhere between a carefully manicured moonscape and a Scottish linksland. To the left of the 18th hole is a two-tiered bunker with an estimated 15 feet between levels and another 15 feet between the upper tier and the green. If you pull your approach shot into either of those bunkers you are dead, dead, dead.

Challenged to put one up on the green from the bottom bunker, Mr. 59 did so — but only after he put it to the upper bunker and hit again. He said that his son, Brent Geiberger — on tour with two victories to his credit — could get it to the green in one. Family pride is a wonderful thing.
— Bob Weisgerber