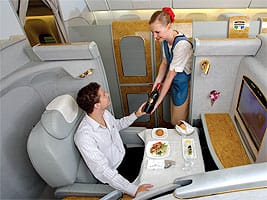 Nonstop Dubai
Don’t wait until you get to one of the luxury towers in Dubai before you begin your vacation in style. Fly nonstop from Los Angeles to Dubai on Emirates Airlines. Besides avoiding the hassle of connections, you can reserve a private suite on the Boeing 777-200LR. In addition to the extra-large seat that reclines into a bed, enjoy a 23-inch-wide LCD screen with 100 movies, 50 on-demand TV and 350 audio channels, and 40 games; your own coat closet; vanity desk; personal mini bar; and access to a gourmet menu and extensive wine list during the 16-hour flight.

Here’s To Your Wealth!
The Official Filthy Rich handbook (How the Other .0001% Lives) by Christopher Tennant (Workman Publishing, 2008) cites Palm Springs as one of 24 “filthy rich enclaves,” noting its celebrity history and residents, including Arnold Palmer and Bill Gates, as well as its “Republican leanings, midcentury modern houses, and hospicelike role amongst the shuffleboard set.” Bighorn Golf Club in Palm Desert receives is mentioned among eight “New Money Clubs,” referencing homeowners Jerry Weintraub and Annika Sorenstam and its annual Snow Day, “when 150 tons of snow are carted into the desert for a party.” The Betty Ford Center in Rancho Mirage gets a plug among rehab centers, but the map shows it near the California-Arizona border.

Reflections
The legacy of Larry Davis continues. Before his death in 2006, he began work on a permanent 9/11 memorial for the California State Fairgrounds. His widow, JoAnn Davis of Rancho Mirage, saw the project through. The memorial plaza, which includes reflection towers, a carillon bell tower, and a 5,180-pound granite sphere etched with the names of the 9/11 victims, was dedicated in August at this year’s fair.