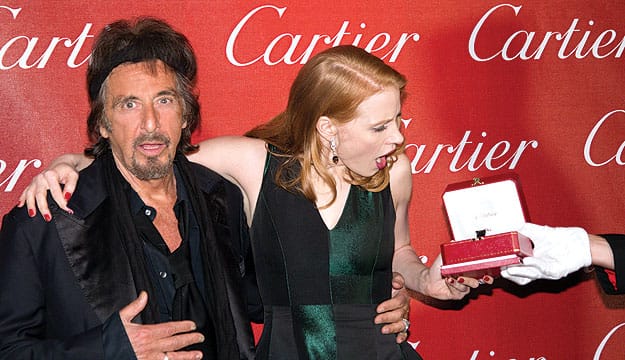 Pat Kodet, who photographed celebs for Maile Klein Photography at the Palm Springs International Film Festival in January, affirms that George Clooney looked great in person and through the lens. “He and Gary Oldman were the most photogenic men,” she says. “For the women, it was Charlize Theron, Michelle Williams, and Jessica Chastain. Gracious to the photographers were Al Pacino, Clooney, Williams, and Glenn Close. Most surprised with their Cartier gifts were Pacino, Chastain, Octavia Spencer, and Melissa McCarthy.”

The Temecula Valley Winegrowers Association has teamed up with Ocean One Travel and Celebrity Cruises for a five-night wine cruise from San Diego to Vancouver (May 27-June 1). While the cruise aboard Celebrity’s Millennium ship includes tastings and dinners with wines from Napa and Sonoma, guests who sign up with Ocean One will enjoy additional treats, including two bottles of wine per cabin, a private cocktail party with surprises, nightly turn-down gifts, T-shirts, and more. Information: 888-353-1922.

The next time you’ve spent so many hours on the driving range that your back aches, you can repurpose your golf ball to relieve the soreness. A licensed massage therapist, Heather Karr created the SPAball Kaddy (“Golf ball included!”) — a plastic polymer device that cradles a golf ball and saves a massage-giver’s hands as they move the ball across muscles. Karr also created the KaddyBACK, a black corduroy sleeve in which you insert a ball and then lean against a hard surface, shifting weight to work the ball into your muscles. www.golfballmassage.com

Diane Von Furstenberg so liked local designer Michael Costello’s gown in Episode 4 of Project Runway All Stars that she said, “Michael, you’ve got to call me after the show.” The prize Costello won in that competition was to have Australian model Miranda Kerr wear his creation. “Come to Palm Springs. We’ll hang out and you can wear it there,” Costello told her. “Palm Springs?!” she replied. “That would be nice.” (Perhaps she’ll bring hubby Orlando Bloom with her.)