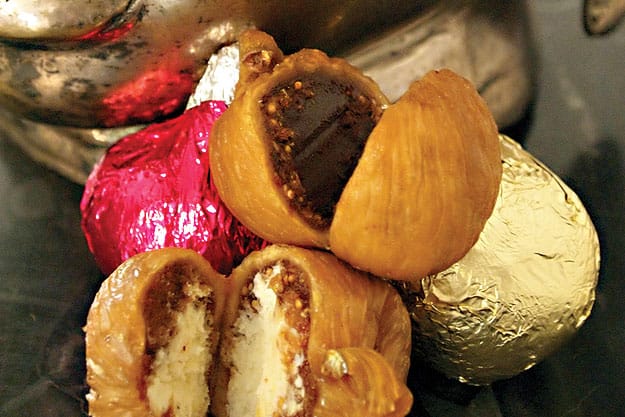 Bite into a Fab Fig and know taste-bud bliss. The nutty essence of dried calimyrna figs and decadent, creamy white- or dark-chocolate ganache seduces all senses. Run your finger over the fruit’s soft, wrinkled exterior, inhale the rich fragrance that smells of earth and sunshine, and let your mouth do the rest. Handmade in the Coachella Valley by entrepreneur Heidi Epling, these succulent, bite-sized treats elevate any meal to its sweetest peak.

The Palm Springs resident discovered the ganache-filled figs several years ago, but the chocolatier only offered them during the fall. It was summer and, she says, “I was craving them. If I wanted them, I’d have to make them myself.”

A self-described foodie, Epling spent a couple of years injecting figs with all manner of ganache — a combination of cream, chocolate, and liquors (primarily port in Epling’s figs). In the process, figs exploded because of too much ganache, or the chocolaty mix was the wrong consistency.

When she had it right, Epling gave her creations as gifts. After a friend told her the figs were “off the hook and she should sell them,” she created a business plan. In January, she left her position as Palm Springs Convention Center events manager to fabricate figs full time.

From logo creation to the packaging to the ganache making to the fig stuffing (a trade secret, she says), Epling does everything herself. In addition to a strong online business, she sells at Palm Springs VillageFest on Thursday evenings and other local street fairs and is considering expanding into other markets. That Old-Time Rock and Roll

You remember sex, drugs, and rock and roll, but if you want to know what really went on behind the music of the 1960s and ’70s, you might find answers in Hollywood The Band, a novel by Steven Jordan Brooks. The Palm Springs resident chronicled the story of a fictional band trying to make it in the music industry amid turbulent times. Based on the author’s experiences, the story takes readers on a journey of drug culture, sexual enlightenment, civil rights, women’s rights, counterculture, and gay issues. “I am a child of the ’60s,” Brooks says. “My inspiration was the times. Cultural shifts and changing attitudes defined a generation and influenced generations to come, and the story reflects this.” David Dreier is leading a new commission focused on Pacific Rim issues for the nonprofit Annenberg Retreat at Sunnylands in Rancho Mirage.

Sunnylands for the Pacific Rim

The Annenberg-Dreier Commission at Sunnylands deals with issues such as the free flow of information and trade integration, topics that affect societies throughout the Greater Pacific.

The commission will organize summits and retreats to pursue specific agendas at Sunnylands. Dreier was first elected to Congress in 1980; authored the 1995 congressional reform package promoting fiscal responsibility, creating term-limits for committee chairs, and opening committee meetings to the public; and in 1999 took the helm of the powerful House Rules Committee. Toscana Country Club reached a milestone $104 million in real estate sales in 2012, with home prices averaging $1.8 million. The square-mile resort and golf community in Indian Wells saw 54 sales, 23 of which were new and 31 resale. Toscana features two Jack Nicklaus Signature courses and Tuscan-style architecture and interior design, as well as a 90,000-square-foot Club Villa complex with a golf club, dining room, boutique, and the Spa and Sports Club.