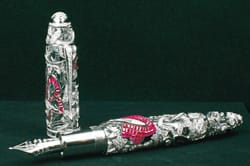 Quick-change artist Tatiana Manjos, guest-starring in this year’s The Fabulous Palm Springs Follies with her husband Victor, knows four English words: Thank you very much. She repeats the phrase to audiences as they file out after the show. For some reason, many people think the Manjos were the couple competing on NBC’s America’s Got Talent. When they tell Tatiana, “I thought you should have won,” she simply replies, “Thank you very much.”

THE COURSE OF A YEAR

Golf Inc. magazine named Palm Desert Country Club’s golf course as 2006 Renovation of the Year. Designed and built in the early 1960s by Bill Bell Jr., the course was renovated by Cary Bickler. Closed for more than a year, the course reopened in October 2006. The $12 million renovation included a state-of-the-art irrigation system, a new cart path, and reshaping of fairways for the 18-hole championship course and nine-hole executive course, as well as expansion of the clubhouse.

POWER OF THE PEN

Montblanc and Van Cleef & Arpels have partnered to create a limited edition Mystery Masterpiece pen. Only nine were made: three each in rubies, sapphires, and emeralds — all accented by diamonds. Priced at $730,000, the pens feature up to 70 gems, each setting requiring at least 90 minutes of work by the lapidary. The “Mystery Setting,” patented by Van Cleef & Arpels in 1933, allows the stones to be held in place without any visible setting or space between them. A butterfly in white gold with diamonds sits on the clip; and the rhodium-plated, solid gold nib is engraved to commemorate the two companies’ centennials.