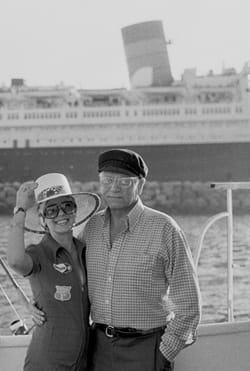 The Queen Mary Goes Hollywood!
Celebrating its 40th anniversary, the Queen Mary opens an exhibition this month of 80 photographs by local photographer and Palm Springs Life contributor Michael Childers in its Sun Deck Gallery. Rockin’ Hollywood (June 15-Sept. 16) includes an image of Sir Laurence Olivier aboard Natalie Wood’s yacht with the Queen Mary in the background.

Toward Tolerance
Earl Grief, a Holocaust survivor living in Rancho Mirage, is raising money to build a Tolerance Education Center at Bob Hope and Dinah Shore drives. Grief, who plans to build a museum and library on one-half of the five acres he owns, raised $900,000 of the $1.6 million cost in Los Angeles and is now raising money in parlor meetings locally. He hopes to educate people about the effects of hatred and bigotry. The center will include a theater with enough seats to accommodate a busload of schoolchildren. Shakin’ It Up
It took three experts six months to concoct, but it takes bartenders at Fleming’s Prime Steakhouse & Wine Bar mere minutes to whip up. “It” is the Vinotini, a fresh twist on the martini designed — with layers of taste — to appeal to wine lovers. The drink comes in Napa Sunset red and Sonoma Fog white. Both are topped with froth (pomegranate port for the red and late harvest dessert wine for the white). The six-month research involved finding the right wines and the right vodka (grape-based). The Playboy Bunnies brought along a little Palm Springs power of their own
when they played softball against the Furniture Unlimited team in November 1967.