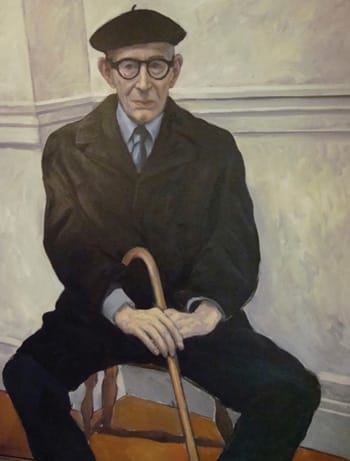 A bold, emotionally charged exhibition of paintings and drawings by Kalman Aron has attracted appreciable attention to the Tolerance Education Center in Rancho Mirage.

Legacy of Hope, commemorating the 65th anniversary of the liberation of Auschwitz Birkenau, included landscapes and portraits in a variety of media.

Aron, a Holocaust survivor, survived seven years in concentration camps by sketching guards and officials and offering them as gifts. He worked in post-war Vienna before landing in Los Angeles when he was 25 years old. He continues working in his studio.

Born in Riga, Latvia, in 1924, Aron was 7 when he had his first show of drawings (all sold in one day). Latvia President Karlis Ulmanis commissioned the 13-year-old to paint his portrait and arranged for him to attend Riga’s Academy of Fine Arts.

The Tolerance Center exhibition, says Director Anne Phillips, “contributes to our focus of educating children about the horrors of hatred in the hopes that they will contribute to the abolishment of it.”

Aron gained notoriety in the 1950s when author Henry Miller, conductor Andre Previn, and President Ronald Reagan chose him to paint their portraits. His work has been exhibited at Corcoran Gallery of Art in Washington, Frey Museum of Fine Arts in Houston, San Francisco Museum of Art, and Los Angeles County Museum of Art. Tolerance Education Center, 1-760-328-8252.