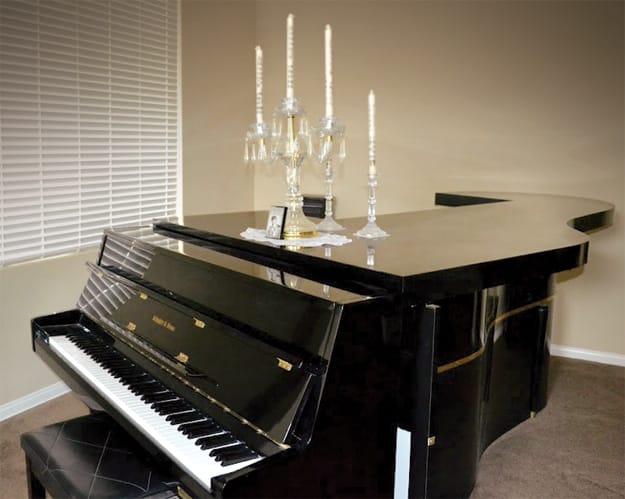 Liberace’s Piano Bar
With the biopic Behind the Candelabra coming out on HBO in early 2013, interest in Liberace and his life in Palm Springs could fetch Mike Maize a pretty penny for the piano-recorder/bar that once belonged to the flamboyant pianist. Maize is downsizing and put the piece on consignment for $12,000 at The Estate Sale Co. in Palm Springs. It was appraised at $15,000 in 1994 when he bought it from a woman who purchased it at a Butterfield & Butterfield auction in 1989. Although Maize was living in Sherman Oaks when he bought it, he moved to Palm Springs last year, “so the piano came home,” he says. He also bought a replica candelabra at the Liberace Museum in Las Vegas to set atop it (included in the sale). In true Liberace (over-the-top) style, the piano-recorder features a soda fountain/wet bar notched into the straight end of the grand piano shape, four bar stools, and 65 prerecorded cassettes. A percussionist who has worked in various aspects of the music business (including as a concert promoter), Maize admired Liberace as “one of the greatest showmen on piano ever.”

The  $4,120,000 Difference
As the holidays approach, there’s a reason to consider a tangible gift that you don’t have to shop for, put on your credit card, or wrap. And you can keep it for the rest of your life. Until the calendar turns to 2013, individuals can gift tax free up to $5,120,000 in cash, art, and/or other collectibles ($10,240,000 for couples). On Jan. 1, the exemption shrinks to $1 million and the tax rate jumps from 35 to 55 percent. Of course, this doesn’t get you out of all seasonal obligations; surely you haven’t missed the hints from your offspring that the iPhone 5 would make their world complete. Inn the Groove
TripAdvisor’s recent “10 Quirky Hotels” list included Palm Springs Rendezvous. Acknowledged for its 1950s vibe, the boutique inn on Indian Canyon Drive garners rave reviews, with more than 200 five-star reviews on TripAdvisor.com. Each of the 10 rooms has its own theme (Route 66, Shake Rattle & Roll, Rebel Without a Cause, Crooners, etc.). In the ’50s, Marilyn Monroe reportedly stayed in what is now a tribute to her: the Pretty in Pink room.

Built in the 1930s, Palm Springs Rendevous was originally known as The Mira Loma. It served as a getaway for celebrities such as Marilyn Monroe, Veronica Lake, Gloria Swanson, and Hugh O’Brien. WORD ASSOCIATION
Robin Maxwell, who lives in the High Desert near Pioneertown, has published Jane: The Woman Who Loved Tarzan (Tor Books). Authorized by the Edgar Rice Burroughs Estate and released on the centennial of Tarzan of the Apes, the novel follows budding paleontologist Jane Porter from Cambridge University to West Africa, where she finds the key to humanity’s past and falls in love.