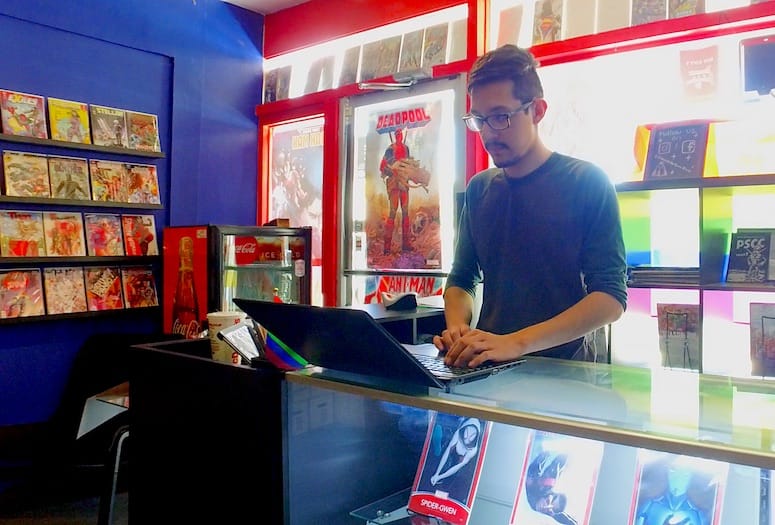 Adrian Cuevas started Interstellar Comic Book & Collectibles in Palm Springs nearly three years ago. "I decided to bite the bullet," he says of the venture.
PHOTOGRAPHS BY STEVEN SALISBURY

On Dec. 17, 2015, Adrian Cuevas pocketed $90. He was 22, owner of Interstellar Comic Book Store & Collectibles in downtown Palm Springs, and on this opening day had seen his dream come true.

For years he had been a comic book enthusiast, but there was no brick-and-mortar place to check out the latest release or chat with others. When he turned 18, Cuevas worked while attending College of the Desert. “I learned a lot about the paperwork and management for a business,” Cuevas recalls of that job. “The pay was good, but I ultimately left because I was miserable.”

He spent the next two years as an assistant manager at a toyshop where he learned the workings of a retail business. With the thought of opening his own comic book store still burning, he decided to take the leap.

“I had the knowledge and experience from my last two jobs, and I thought I could do it,” Cuevas says. “I kicked the idea around in my head for months. And I pitched the idea to my parents. I spent four years at COD and I didn't see myself going anywhere or [getting] any closer to where I thought I should have been after four years. I had a good amount of money put aside and I decided to bite the bullet.”

Almost three years later, Cuevas has drawn a loyal following to his shop. Collectors like Carl Aurelio stop by weekly to peruse the latest editions. “I have a soft spot for Marvel and X-Men because of the outcast motif,” Aurelio says. “Gay comic readers see ourselves in those themes. I mostly read Marvel but I also read some DC as well. So Storm and a character named Karma are my favorite Marvel, and Vixen and Huntress are my favorite DC.”

Cuevas spoke more about his store and the evolving comic book industry.

Who is your favorite superhero?
There wasn't any hero I connected with until Robert Downey Jr.'s Iron Man release in 2008. I was 14, just a freshman in high school at the time, and he was everything amazing that I could've ever wanted. Sure the Iron Man suit is an amazing thing. It can fly, it's invincible, and it can shoot lasers! But that's not what made Iron Man amazing to me. Tony Stark did. 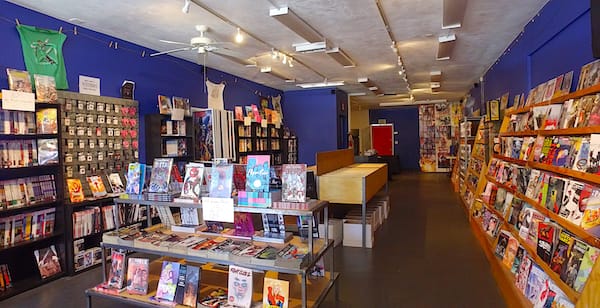 He doesn't have any powers; he only has his mind and his hands. The Iron Man suit is his creation, but wouldn't exist if it weren't for him. He was the most human and relatable character to me.

What is the relationship between superhero movies and their comic book origins?
It's a cycle in both mediums; comics and movies feed off each other. For example, with Iron Man, in 2006 the six-issue story arc Iron Man: Extremis was written by Warren Ellis and Adi Granov. These issues were the basis of the original Iron Man film in 2008. After the release of that film, Iron Man's look as well as Tony Stark’s appearance and mannerisms in the comics reflected the film and Robert Downey Jr. The same could be said about Wolverine after the release of X-Men in 2000.

What is the most challenging part of owning and running your own comic book store?
The most challenging part is keeping up to date with what is going on in the stories. Comics do not stop for anyone. New issues release every Wednesday. There's so much out there to read that I can't possibly know everything that's going on, but I do my best to know as much as I can to help my customers.

What type of collectors comes into your store?
Plenty come in weekly to get the new releases or the series they collect to read. There are some that do so to collect, never read, and preserve in hopes of making money off of them one day. There are people that just collect children's books for their kids, and some that like to collect volumes of graphic novels.

Superhero posters and more are part of the exterior invitation from Interstellar Comic Books and Collectibles in downtown Palm Springs.

What do you consider the best or most fun part of your comic book place?
The community. One of my main driving points when I opened the store was to have a place for a community to congregate, grow, and share in Palm Springs. I love seeing my regulars coming to the store and then meeting each other and conversing about their shared interests. To me, my shop is about the culture and community as well. Although I don't feel I've finished making my shop, I believe I've accomplished that.