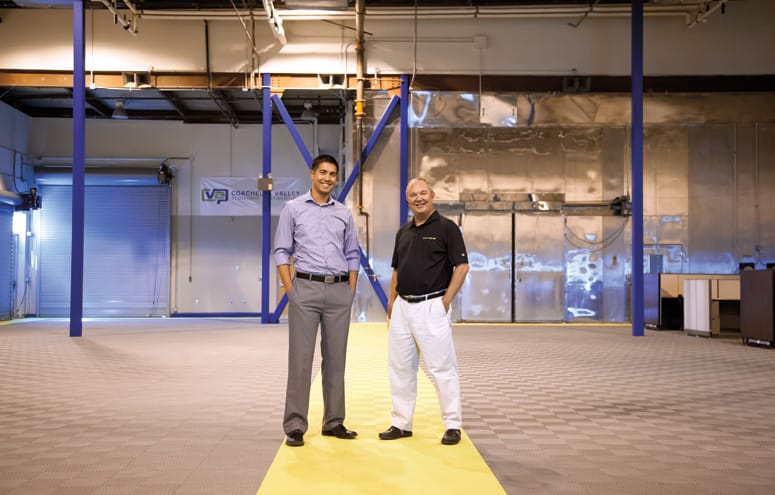 Not so long ago, few people had even heard of an innovation hub. “We didn’t have a clue, really, what it meant,” says Palm Springs Mayor Steve Pougnet. “There was no money and there was no federal program.”

In 2011, the Coachella Valley iHub launched as a business incubator with the goals of diversifying the region’s economy and creating demand for higher-skilled, higher-wage professionals. Today, 22 fledgling enterprises operate in the program, and several have advanced from the iHub to the nearby Palm Springs Accelerator Campus, which accommodates research and development as well as light manufacturing. “We invested money when times were tough, and now we’re starting to see the fruits of our labor,” Pougnet says.

The Coachella Valley Economic Partnership operates the iHub and the Accelerator Campus in Palm Springs, as well as workforce and small business development offices in Palm Desert and Indio, respectively.

One iHub entrepreneur, Indy Power Systems CEO Steve Tolen, could have taken his startup to Northern California’s Silicon Valley but instead chose the Coachella Valley. “The Coachella Valley iHub will give you a helping hand and advice that you can trust,” he says. “Silicon Valley is more into cherry-picking companies and concepts that are hot.”
Tolen’s firm is one of about a dozen “virtual companies” operating out of the iHub. “We’re not physically located there all the time, but when we do come to the Palm Springs area, or California in general, we stop in and I have meetings and consult with people,” Tolen says.

The company manufactures an energy management component called a micro-grid that helps businesses optimize the efficiency of their electrical use. Tolen hopes to relocate Indianapolis, Indiana–based Indy Power Systems to California in the near future. “It didn’t take much to recruit us to come out there,” he says. “California has a lot of renewable energy projects. It’s going to be a good start for us.”

EV Enterprises, which manufactures electric vehicle microelectronics, operates at the iHub’s Palm Springs Accelerator Campus, a 43,000-square-foot facility in a Foreign Trade Zone adjacent to Palm Springs International Airport. Its sales grew from $60,000 in EV’s first year to $300,000 in the second. The firm’s president, Bill Schlanger, projected the company “could definitely be in the tens of millions” in three years. The company’s staff has grown from two to four, but Schlanger forecasts as many as 30 employees by year’s end.

Of the iHub, he says, “It’s a great place to start your business. There’s a lot of resources available, a lot of guidance, a lot of encouragement. There is introduction to capital and all kinds of expertise. The facilities themselves are top-notch. There are a lot of other entrepreneurs around who have had experiences that you can share.”

Joe Wallace, the iHub’s managing director and CVEP’s chief innovation officer, says the resident firms often partner with each other. “There will be 12 to 20 companies there at any given time, so they get to know each other and all of these companies could actually be suppliers to one another, too,” Wallace says.

EV Enterprises has a contract with neighbor Solaris Power Cells, which manufactures solar-powered golf carts. “We’ve collaborated with another company, Post Modern, that’s making computer kiosks, and we’ve made some electronics for them,” Schlanger says.

Not all iHub businesses are high-tech. Sonia Kanner manufactures an attractive and sleek alternative to the dowdy fanny pack called hipS-sister. She still lives in San Diego, where she launched the business, but she moved her offices and distribution center to the Palm Springs Accelerator Campus.

“What the iHub has provided for me is basically the tools and the structure to build a business,” she says. “I was a single mom, so doing things on my own would have been nearly impossible. Having that support, having the resources, having the mentorship, and having other entrepreneurs around me gave me the confidence to make it happen. It started with just me and one other person; now hipS-sister has eight full-time people.”

Kanner visited the desert regularly as a child and says she never dismissed it as merely a tourist resort. “I saw there was a lot of vibrant energy here, like it’s just ready to explode,” Kanner says. “It’s a beautiful place, but it’s mainly the people and the opportunities, and the networking and the collaborations.”

Kyle Wagner, assistant director of the iHub and the Coachella Valley Small Business Development Center, says the overarching concern of most entrepreneurs is how to access capital. “We don’t award grants or micro-loans, and a lot of the companies in the iHub aren’t going to be able to qualify for a bank loan — that’s just the nature of the game,” Wagner says. “So we help them find different forms of equity financing.”

The iHub has a relationship with the Inland Empire chapter of Tech Coast Angels, a group of independent financiers who have invested more than $120 million in over 200 companies. “We’ll help them prepare their pitch deck,” Wagner says. “They’ll come in and, like on the TV show Shark Tank, we’ll let them give their presentation and then we’ll try to poke holes in it so they can make it better.”

A few iHub clients have tried crowdfunding through websites like Kickstarter.com on their own, but Wagner anticipates iHub will embrace this as a resource in the near future along with crowdsourcing, once the U.S. Securities and Exchange Commission has approved regulations for equity investing. (With crowdfunded investments, people are funding something they’re excited or passionate about, but with no potential for financial gain.)

The Palm Springs Accelerator Campus recently opened its Health and Medical Innovation Center. Funded with a $500,000 grant from the Desert Healthcare District, the 12,000-square-foot space includes a clean bench with a DNA sequencer. Several startups moved into the facility this fall to take advantage of the low overhead and access to resources.

Planning and funding have begun for a second accelerator campus in the eastern Coachella Valley. “The skill sets of the workforce and the natural attributes of the East Valley are different from those in the West Valley,” Wallace says. “The East Valley is a good platform to innovate with respect to the reclamation and resurrection of the Salton Sea. And there is a very strong, healthy defense business down there.”

Wallace hopes to leverage the intellectual property owned by the federal government — the public — as a platform to create consumer products. “Some things that came out of Defense Department research include contact lenses, compact discs, data encryption, the Internet, and fiber optics,” he says.

According to CVEP’s most recent economic impact study, the iHub program’s 20-year potential is the creation of 5,112 direct and indirect jobs, along with $12.5 billion in total economic activity. The average expected wage for a manufacturing employee in this region is $48,900, according to industry data.

“Having the confidence of a number of companies in two iHubs can make [the region] stronger in attracting a business that’s looking for a technical workforce,” Wallace says.

“There’s no reason why we should not be luring some of those high-tech jobs [from the Silicon Valley]. There’s no reason why some of those emerging companies shouldn’t be doing business in Palm Springs,” Pougnet says. “That’s a huge opportunity and one that we’re taking a really serious look at, because the quality of life is terrific in the desert — and we can make it happen.”