It Could Happen to You! 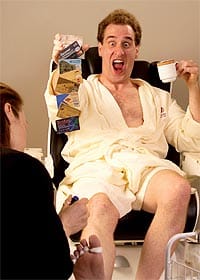 Richard and Barbara Smith, a retired couple, split their time between homes in Palm Springs and Coos Bay, Ore. Upon returning to Palm Springs last August, they found their world had been turned upside-down.

After spotting an unaccountable charge on one of their credit card statements, they called the credit card company to report the error. To their surprise — and horror — they were told of more mysterious charges. Someone, they determined, had stolen their mail and credit information. The Smiths immediately closed the account and filed a report with the Palm Springs Police Department.

It took six weeks to sort out their credit problems. While the credit card company absorbed the $44,000 loss, the Smiths were left feeling vulnerable. “You feel violated,” Barbara Smith says. “You wonder what is going to come next. Are they going to come rob our house?”

In this case, the culprits never had the chance: During an unrelated burglary and car theft investigation, evidence linked a 24-year-old Desert Hot Springs man and his girlfriend to the Smiths’ case and others — including an elderly Moreno Valley woman who resided in a convalescent home. The pair allegedly burglarized the woman’s mobile home and set up other credit accounts with her personal information. Among their purchases were two tickets to Hawaii. The man was charged with 15 counts of burglary, car theft, and identity theft, and faces 10 years in state prison. His girlfriend will serve five years.

In another Palm Springs case, John Doe (a fictitious name) learned he was a victim of identity theft after he and roommate Jonathan Wayne Gilbertson had a falling out. Shortly after Gilbertson vacated Doe’s apartment, Doe noticed problems with his credit. He requested a new credit card, but when it arrived, Doe saw Gilbertson’s picture on it. Gilbertson used the credit card information to acquire Doe’s Social Security number and a copy of his birth certificate, which he used to get an Arizona driver’s license. Wanted as a suspect in a series of crimes in Los Angeles and San Bernardino counties, Gilbertson (a.k.a. Jeffrey Paul) remains at large. A year and a half later, Doe still cannot get a credit card. Adding insult to injury, if he is pulled over for as much as a traffic ticket, Doe’s name will pop up as “wanted” on any police computer.

These are only two stories in a plethora of cases. As a bulletin from 10-35 JIVE, a bimonthly law enforcement report, states, “Identity theft is a wide-ranging crime sweeping across America — reaching epidemic proportions in California.”

California is one of 44 states with an identity theft law — Penal Code section 530.5, which defines identity theft as “Willfully (obtaining) personal identifying information . . . of another person and (using) that information for any unlawful purpose.” Violators face misdemeanor or felony charges with a state prison sentence of 16 months, two years, or three years, plus fines up to $100,000. The federal Identity Theft and Assumption Deterrence Act of 1998 made identity theft a federal crime, carrying penalties of up to 15 years in prison, plus fines and restitution to victims. Although the FBI, U.S. Secret Service, U.S. Postal Inspection Service, and the Social Security Administration investigate violations, these crimes rank relatively low among federal priorities, leaving most enforcement to local authorities.

Palm Springs Police Sgt. Don Crager, head of the Property Crimes Division and the detective who headed up the Smith investigation, puts it this way: “Is it a federal crime to steal mail? Yes. Will they really pursue it? Probably not.”

Crager first saw an increase in identity thefts in 1998 and now works a half-dozen cases a week. Similarly, Indio Police Detective Randy LaValle, who began training in identity theft in 2000, has seen his caseload grow. “People come to me with no idea how someone got their personal information,” LaValle says. “They are often victims of their own use of the Internet, which has made information available to suspects.”

The magnitude of the problem revealed itself recently when a MasterCard representative said a computer hacker had recently broken into secure, confidential files at the northern United States branch of a national bank, absconding with 2.5 million personal account and Social Security numbers. “We’re still trying to sort the mess out,” the rep deadpanned.

The Federal Trade Commission, which tracks identity thefts, began collecting consumer complaints in 1999. Since then, the number of reported victims has soared from 31,000 to 210,000 in 2003. In September, the agency reported that as many as 10 million people had their personal information appropriated, costing consumers and businesses $53 billion.

Identity thieves acquire personal information in various ways. They steal mail and use pertinent information to obtain a new credit card or set up additional credit or bank accounts. They “dumpster dive” — rummage through your trash looking for credit card receipts and canceled checks. They telephone and dupe other sources pretending to be your employer or creditor to “confirm” credit information. Or, more simply, they glean the information from you by telephoning and pretending to be a credit company, car dealership, etc. Once thieves have your personal information, they phone your credit card company and request an address change, diverting your statements to another location, which gives them several billing cycles to run up the tab before you catch on.

Identity theft thrives on light law enforcement. Local agencies, which typically give violent crimes top priority, sometimes lack the trained investigators to trace transactions and prosecute. Overlapping jurisdictions create another obstacle. Identity thieves move frequently, working from hotel rooms. They also engage in related offenses — forgery, credit card and real estate fraud, and car theft — that compound the complications a district attorney faces in prosecuting a case. In the end, a D.A. may prosecute for the simplest, most provable offense, such as car theft, which carries a heavier sentence, therefore burying the identity theft charge. Businesses, particularly banks, often balk at opening their books for scrutiny, deeming them privileged client information. And credit card companies shrug off identity theft as being a cost of doing business — a cost ultimately passed along to you.

Locally, the Desert Investigators Association — made up of representatives of 20 federal, state, and local law enforcement agencies — meet monthly in various locations to share information about cases and trends in their jurisdiction. “Not a month goes by that at least one or more cases of identity theft is brought up at a meeting,” says Palm Springs Police Detective Troy Castillo, the association’s president. “It is a big problem in the Coachella Valley.”

One reason for the frequency of identity theft, Castillo says, is the crossover of crimes by offenders. Drug cases, for example, go hand in hand with identity theft, the detective notes. “Identity thieves have a reason to do what they’re doing, like buying drugs,” Castillo says. At almost every meeting someone, say, from drug enforcement to child protection services to probation will bring up an offender’s name in connection with a crime and someone else will say, ‘Hey, I know that guy.’” Authorities then add identity theft to the charges.

While association members cooperate to thwart identity theft, you provide your own best defense. Experts offer these indicators that suggest someone might have stolen your identity:

If you have been a victim, follow these steps:

In September 2002, Ishman Walker was arrested in Chicago for felony identity theft when he tried to find an accomplice who resembled basketball superstar Michael Jordan or Jordan’s wife, Juanita. The Jordans’ bank account number was found on a piece of paper in Walker’s home.

Although you in all likelihood cannot entirely safeguard yourself from identity theft, you can minimize your risk. Here’s how: