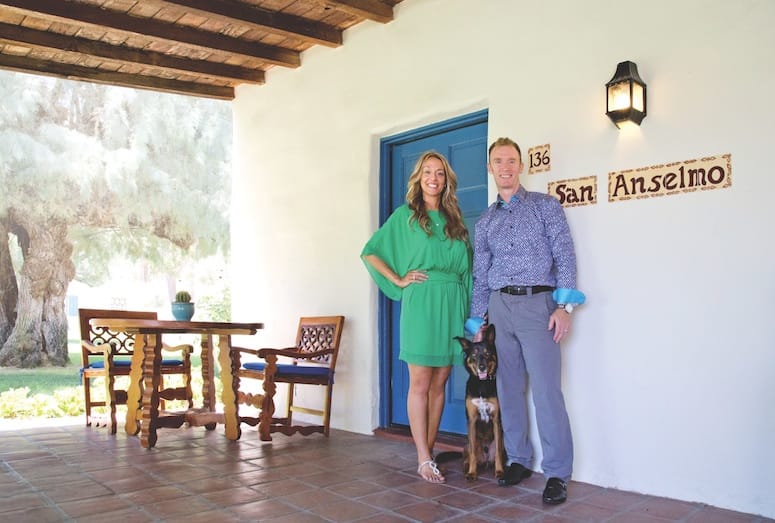 “Jackson has changed our lives in so many ways that we could have never anticipated,” says Valerie Powers Smith, who adopted the 8-week-old Doberman-German shepherd puppy with her husband, Dr. Mark Smith. “I cannot remember life without him. He’s made us parents.”

Jackson, his mother, and three siblings were barely clinging to life when they were rescued. “They were thrown from a car into the desert in Mecca, and they were all banded together as a litter,” Powers Smith says of Loving All Animals’s rescue of the family. “They were in such distress that people heard them squealing and the mom crying. It took two days to get the pups out of a water pipe because they were so frightened. They did not think they were going to live.” Furry guests at La Quinta Resort can look forward to the same posh treatment as Jackson, starting with the use of a made-for-napping signature pet bed.

Loving All Animals nursed them back to health and placed them in foster care until they were ready for placement in homes. The couple met Jackson during an adoption event at The River they attended at the suggestion of a close friend who had also recently adopted a dog. The Smiths had been contemplating adopting a pet for about six months.

“Jackson’s litter immediately grabbed our attention,” Powers Smith says. “One of the volunteers picked Jackson up and handed him to me. He wrapped his little paws around my neck and started kissing me as if to say, “‘Hello, Mommy, I’ve been waiting for you!’”

There was one hitch: They were headed to St. Lucia on vacation a week later. They brought Jackson home for the week, and then he stayed with his foster family until the couple returned 10 days later.

Once the three of them were reunited, Jackson settled back in to the family’s Mission Hills Country Club home right away. The couple credits his “incredibly caring” foster family for helping him to adjust to life off the streets. “Loving All Animals and the foster family did so much,” Powers Smith says. “Jackson taught us and trained us more than we trained him. He tells us when he has to go out. He never chews anything that’s not his. Not carpet, not furniture, not my shoes. We’ve been really, really lucky.”

Jackson was the protector of his littermates in the wild, a role a pet psychologist says he learned from his devoted mother. It’s a role he has now adopted with the Smiths. To help him overcome his hardscrabble puppyhood, the couple started Jackson on a routine that includes lots of exercise, an all-natural, unprocessed Paleo-type diet (with fresh roasted turkey breast for dinner every Sunday), and lots of socialization.

The couple is physically active and athletic, and Jackson jumped right into the mix with gusto. Smith, an accomplished former rugby player, is a fitness and diet expert who maintains his practice at The Sports Club at Mission Hills Country Club. Powers Smith is an attorney specializing in health care law and advocacy for families and people with disabilities.

Smith commutes to The Sports Club by golf cart from their nearby residence and pops home frequently during the day to check on Jackson between appointments. “Jackson loves the golf cart,” Powers Smith says. “When we first rode him around on it when he was little, we would call it a ‘whee ride,’ because his face looked like ‘Whee!’ If we come in from the gym at night and say, “Do you want a whee ride?” he almost explodes.” Jackson — whose nickname is “Handsome” — was just a baby when he caught the eye of a sleek black Lab named Coco, who was adopted from the Indio shelter several years ago by Dr. René Dell’Acqua, another close friend. (Dell’Acqua’s son adopted Jackson’s sibling Jagger.)

Coco immediately fell for Jackson. He was shy at first, but love eventually blossomed. They have spent nearly every day together for a year and a half, accompanying Powers Smith and Dell’Acqua on morning hikes or play dates.

“The bond they have is really something special,” Powers Smith says. “René and I get choked up when we see them together. The two of them react audibly or physically when you say the other’s name.”

In fact, he has a pretty sophisticated vocabulary and knows words like “treat,” and will fetch toys by name, like Jakey Snakey, Gator, Hedgehog, Squirrel, and Mallard. “And he definitely knows Mommy and Daddy, Aunt René and Coco, Barkingham, puppy play, whee ride, Frisbee, and pool party!” she says. Photo courtesy of Valerie Powers Smith
Jackson hanging out at the beach.

When the Smiths’ schedule is packed or they need to travel and can’t take Jackson along, he socializes at Barkingham Palace, a pet resort in Palm Desert. The additional interaction with other dogs has helped build his confidence as well, Powers Smith says. The Barkingham staff worked with Jackson, who can be selective with which dogs he likes, and he’s now the life of the party there. In addition to his girlfriend, he also has a best friend named Einstein.

The Smiths entered Jackson in Palm Springs Life’s Cutest Pet Contest “as proud parents,” Powers Smith says, “but I want people to understand that this is what a rescue dog looks like, and to understand the whole concept of rescue, where there’s such great need, versus breeding and buying purebred dogs when you’ve got overpopulation in shelters. I wanted to get that story out so that more animals have this opportunity, and more people have this enrichment in their lives.”

Back at the La Quinta the family’s Palm Springs Life photo shoot is wrapping up, and Jackson is ready for a nap. Ever conscious of Jackson’s well-being, Smith scoops the dog up and carries him so the hot midday pavement won’t burn his paws. Powers Smith walks alongside her husband, gently cradling one of Jackson’s paws in her hand. It’s time for the family to head home. Photo courtesy of Valerie Powers Smith
Jackson as a puppy.