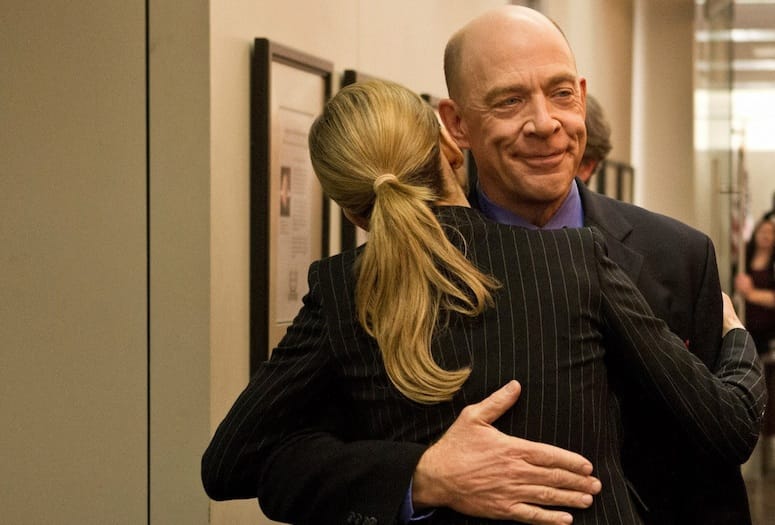 J.K. Simmons on the set of "The Closer," but he may best be known as the spokesperson in Farmers Insurance commercials.
Photo Courtesy of The Closer on Facebook

J.K. Simmons, whose face and voice is recognizable to fans as the spokesperson in those Farmers Insurance commercials, will receive the Spotlight Award, Actor at the 26th annual Palm Springs International Film Festival Awards Gala on Jan. 3 at the Palm Springs Convention Center.

Past recipients of the Spotlight Award include Julia Roberts, Jessica Chastain, Amy Adams, and Helen Hunt. All four recipients received Academy Award nominations in the year they were honored. In his most recent work, Whiplash, Simmons plays Terence Fletcher, an jazz instructor at one of the best music schools in the country discovers Andrew Neyman (Miles Teller),  an ambitious young jazz drummer, single-minded in his pursuit to rise to the top of his elite east coast music conservatory. Plagued by the failed writing career of his father, Andrew hungers day and night to become one of the greats.  Fletcher transfers the aspiring drummer into his band, forever changing the young man’s life. The Sony Pictures Classics film is written and directed by Damien Chazelle.

Simmons has appeared in diverse projects spanning motion pictures, television and the stage on and off Broadway. His motion picture credits include Sam Raimi’s Spider Man trilogy, Hidalgo, The Ladykillers, The Mexican, Off the Map, For Love of the Game, The Gift, Thank You for Smoking, Rendition, Burn After Reading, Juno, The Words, The Music Never Stopped, Jennifer’s Body, Extract, The Vicious Kind, I Love You Man, Beginner’s Guide to Endings, Contraband, Up in the Air, Jobs, and Labor Day. His upcoming projects include The Reluctant Professor opposite Hugh Grant and Marisa Tomei, Gillian Raimi’s next feature Murder of a Cat and Jeremy Sisto’s feature Breakpoint.

On the small screen, Simmons played roles in TNT’s hit series The Closer, HBO’s acclaimed drama Oz, NBC’s Growing Up Fisher, NBC’s Law & Order, NBC’s Parks and Recreation, and a recurring role on TBS’ new hit comedy, Men at Work. Simmons has appeared on the Broadway stage in performances of Guys and Dolls, Laughter on the 23rd Floor, A Change in the Heir, Peter Pan and A Few Good Men.