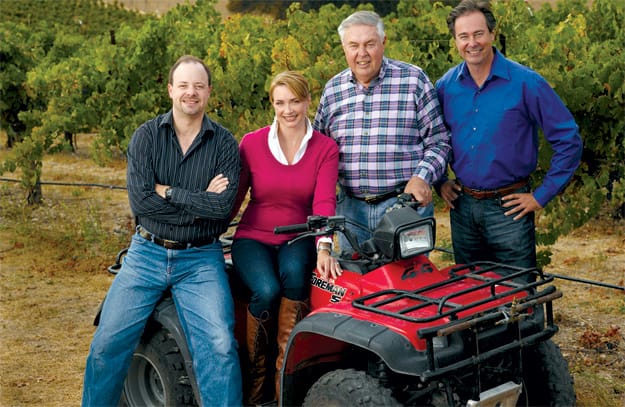 Until about 1999, wine drinkers primarily knew J. Lohr Vineyards & Wines for its chardonnay. Today, J. Lohr Estates Seven Oaks Cabernet Sauvignon edges out J. Lohr Estates Riverstone Chardonnay as the winery’s best seller. “Whether you are in Palm Springs or Miami or New York or Dallas, that’s the wine you are going to see on the shelves and in restaurants,” says Lawrence Lohr, director of wine education and son of winery founder Jerry Lohr. “That’s because of the growth of our cabernet sauvignon program.”

The family-run operation (Jerry and his children: Steve, Cynthia, and Lawrence) is now the largest winery in the Paso Robles appellation, though it began in the early 1970s with 280 acres in Monterey County’s Arroyo Seco appellation. Although the winery still owns those vineyards (and has expanded its holdings there, including vineyards in the Santa Lucia Highlands), it cultivates even more vineyards in Paso Robles, as well as 35 acres in Napa Valley, and maintains its headquarters and a tasting room in downtown San Jose (a larger tasting room being in Paso Robles).

“San Jose was really an area that Jerry felt comfortable doing business in,” says Lawrence, explaining that his father and business partner Bernie Turgeon had been building custom homes in the Bay Area and ended up locating the winery in a closed brewery facility.

Lohr and Turgeon planted 11 varieties of grapes in Monterey County. The soils and climate favored white varietals over red, other than pinot noir and gamay. “The red wine grapes were doing well in terms of yield, but didn’t have the phenolic maturity, the complexity, that winemakers look for,” Lawrence says. So in 1986 (two years after Turgeon retired), Jerry Lohr purchased land in Paso Robles to expand the line of J. Lohr wines.

“Jerry is as much a farmer as he is anything else, because he grew up on a farm in South Dakota,” Lawrence says. “From a very young age, he was introduced to the concept of growing crops where they grow best.” He also learned about soils while earning his civil engineering degree from South Dakota State University. After getting into the wine business, he took viticulture classes at University of California, Davis.

J. Lohr refrains from using commercial fertilizers and follows a meticulous process to maintain a soil profile of 25 percent air, 25 percent water, 5 percent organic materials, and 45 percent minerals. Often, the land is planted for three to seven years with triticale, which is then incorporated into the soil and augmented with limestone. Before vines are planted, their roots are dipped in powdered micro rhizomes (rootstock). Grape pomace with mushroom bedding is composted and mixed under the rows.

“It’s yet another example of the due diligence that we apply to every aspect of the business,” Lawrence says. “This kind of business philosophy comes directly from Jerry, because he has always been this way. Since he started his first business in 1965, he has applied rigor to everything he’s done.”

These days, J. Lohr grows chardonnay, riesling, pinot noir, and valdiguié in Monterey County. While the spelling and pronunciation of the latter seem challenging for marketing, Lawrence explains that the grape is closely related to gamay noir.

“The valdiguié has such a strong following and is such an interesting little wine that it does make its way onto wine lists,” Lawrence says. “It’s the only wine in our portfolio that you can serve slightly chilled, or you can heat it up and make it into the best mulled wine you have ever had.

It’s a wine for sipping on a summer day, but it’s also a wine for people not used to drinking red wines. It’s aged in stainless steel tanks for three months and bottled right away. It has very few tannins.”

For deeper red wines, J. Lohr relies on its vineyards in Paso Robles, where grapes benefit from a diurnal swing that can be 50 degrees. The winery recently purchased land in San Miguel, just north of Paso Robles, to expand its cabernet sauvignon production.

“The vineyard purchase probably won’t come on line for four or five years,” Lawrence says. “Jerry feels strongly that  if he is going to [add vineyards], he is going to do it his way. This means purchasing raw land that has been used for pasture or row crops and planting to vineyard.”

The winery planted 35 acres in St. Helena (Carol’s Vineyard, named in honor of Jerry’s late wife) to sauvignon blanc and cabernet sauvignon, as well as a small amount of petit verdot for blending.

The Lohr family’s short-term goal, Lawrence says, is “to be known for doing things the right way and applying rigor.”

In the long term, he says, the family wants to be known for promoting the wine industry “to the point where the average consumer is introduced to a very affordable, very well-made wine” and “helping wine become part of the everyday fabric.

“In addition to that,” Lawrence continues, “something that we feel strongly about is promoting research in the wine industry and getting involved in philanthropic endeavors.”

While each family member is intimately involved in the winery operation, they have two winemakers (Director of Winemaking and Executive Vice President/COO Jeff Meier and Red Winemaker Steve Peck), as well as two assistant winemakers.

“We have a formalized process by which a group of 15 of us get together in mid-December and evaluate every young wine that has been made from the grapes harvested earlier that fall,” Lawrence says. “This allows us to determine things like pricing, branding decisions, and which wines are going to make their way into which part of our portfolio.”

Meier and Peck make the final winemaking determinations, such as blending formulas. However, Lawrence notes, “Jerry is consulted in every major decision.”