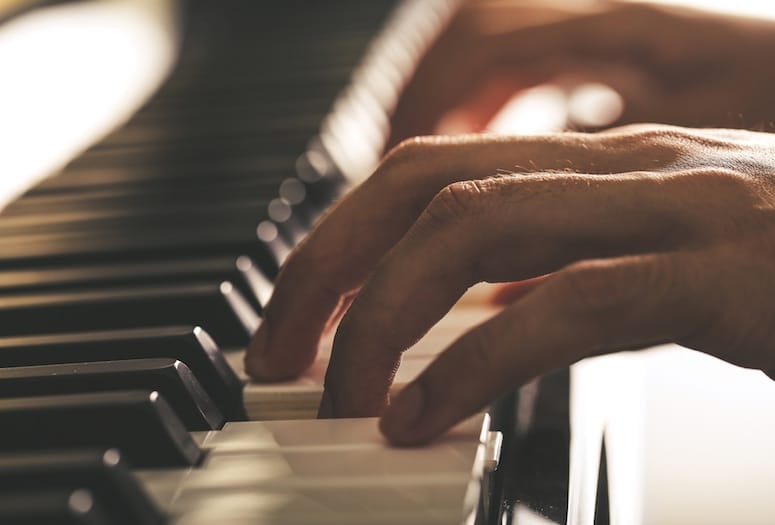 J. Scott Beaty is celebrating 25 years as house pianist at the McCallum Theatre, a gig he got on the recommendation of former President Gerald Ford. Raised in New York, Beaty has a long résumé with major accolades, including performing at Bill Clinton’s inauguration and the Palm Springs International Film Festival. He plays for functions around the nation, and, at the McCallum, performs at private galas as well as in the Gerald Ford Founders Room, a VIP area for donors who give at the Founders level. We spoke with Beaty about his inspiring career.

How did you meet the Fords?
I was recruited from Boston [to play at The Ritz-Carlton, Rancho Mirage]. The Fords had been coming to dinner; they would tell me which night they were going to be there, and I would do everything I could to accommodate them. Mrs. Ford loved romantic melodies, and one of her favorite pieces was a Rachmaninoff. When they came through the door, I would break into one of the pieces they enjoyed.

There was a night in 1993; I had just finished playing one of the songs, and they were leaving. They always came over to the piano to say thank you. President Ford leaned over, and he said, “Could I sit down on the bench with you for a second?” I was so thrilled that he sat down. He said, “They have built a room at the McCallum Theatre called the Gerald Ford Founders Room, and I would like you to be our pianist.”

Have you always been fond of the piano?
My mom used to play to put me to sleep and started giving me lessons when I was 3. I wanted to be a Mouseketeer; my aunt was a casting director for Disney and knew I wanted to come to Hollywood someday. I was 5 and wrote her a letter, saying that I couldn’t wait any longer; I was going to take a bus to Hollywood and wondered if she would be my mentor. My mother said, “You just don’t understand. You can do what you want when you’re older.” They made me realize in a calm way that, “You will get there someday. You will get where you want to go.” So I was in every play and I sang for everything you could possibly sing for. I was very lucky.

You also teach. Describe your method.
I teach esoterically, a method I’m learning from Switzerland that is going to be my doctorate. It’s taught through movement and sound and wind. It’s like nothing  I’ve ever seen in my life, and it’s changed my playing.

I have private students and have had three who were Marines; the dedication that the soldiers had was unprecedented. I have never seen people practice like this and come in so prepared. One Marine moved through book one [of the John Thompson instructional piano series] in three-and-a-half weeks. I have never had anyone do that; it was because she wanted it that bad. She went back on active duty and came in to say goodbye. She said, “I’m ready to show you something.” She sat down at the piano and played the final piece in book one, which is unheard of [in [that timeframe]. She managed to put soul to her piano. It’s those moments you can’t put a price tag on.

What does music mean to you?
Every single person has a degree of [musical capability] in them. Whether they want to recognize it has a lot to do with their upbringing. My grandmother couldn’t play; I started teaching her when she was 88. She had horrible arthritis, and I said, “Gram, you can still do it. There’s a way to do it.” She died at 105 and she could play a little of Chopin’s Études. That was her pride and joy.

It is the one thing that’s common among all languages … I believe music is what is going to heal our world.