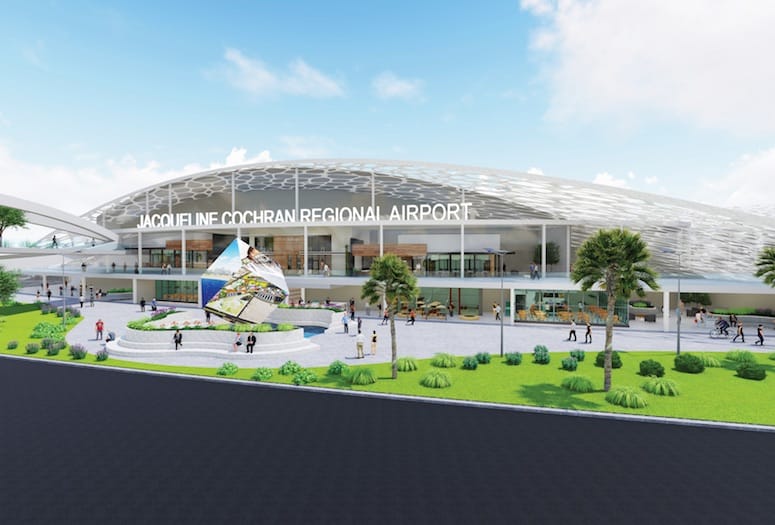 In its video Back From the Future, KHA Architects of Palm Desert conceptualized what could happen in another 30 years, depicting Jacqueline Cochran Regional Airport as an integrated hub of business logistics.
ILLUSTRATION COURTESY KHA ARCHITECTS

Titled Back From the Future, the CGI animation envisioned the region in 2050 and the achievements that took place starting in 2018. Among the highlights was Jacqueline Cochran Regional Airport at the Coachella Valley’s southeast end.

The video’s narrator refers to the airport in 2050 as an “automated, intermodal center of trade” that “has become the model for integrated logistics” and a “logistics management center for the Southwest, where upgrades in secure communications are assisted with technology developed through the cybersecurity program in Palm Desert”.

The main runway measures 8,500 feet in length and 150 feet in width, giving it capability to support C-III aircraft, which includes Boeing Business Jet 2 and the Gulfstream G-V. This regional airport is ideal to support air carriers and air-cargo operations such as FedEx, DHL, and UPS.

Regional airports similar in size and layout that have successfully transformed into logistics hubs include Mobile Downtown Airport in Alabama and Sacramento Mather Airport in California.

Centrally located in Southern California, Jacqueline Cochran Regional Airport falls within a four-hour drive of major metropolitan markets such as Los Angeles, Phoenix, and Las Vegas. It offers easy access to highway and rail systems and the possibility of same-day access to Mexican trade gateways and West Coast ports.

Furthermore, the southern region of the Coachella Valley is designated as an Opportunity Zone. Such zones function as an investment tool derived from the Tax Cuts and Jobs Act passed in December 2017. The designated zones are intended to trigger economic development by providing tax benefits to investors. Visit opzones.ca.gov for more information.

From its inception, Coachella Valley Economic Partnership has worked with government and community leaders to bolster economic vitality and encourage business attraction to the region. The vision to transform Jacqueline Cochran Regional Airport into a logistics hub is a perfect example of job diversification and creating a year-round sustainable economy.