Nervous and chain-smoking before hop-ping into the Porsche 356 Super Speedster he had owned a mere two weeks, soon-to-be movie legend James Dean surprised himself and the Palm Springs Road Races crowd on March 26, 1955.

“Neophyte Dean wasn’t given a chance by veteran followers of the burgeoning sport,” wrote Gus Vignolle in his MotoRacing tabloid. “But he surprised them all while his studio [Warner Bros.] was unaware its precious property was flying low at high speeds on the airport’s concrete runway.”

At the end of the first lap, Dean led by 300 yards. By the end of the second lap, he widened his gap to 400 yards. On the sixth and final lap, he crossed the finish line with a half-mile between his Super Speedster and the second-place finisher in the 2.3-mile race for engines 1,500 cubic centimeters and under. As Vignolle reported, Dean’s reaction was, “Gee, I can’t believe it.”

The win put the budding actor and racer in good standing for the following day’s final, in which he came in third but was bumped to second when officials disqualified winner Ken Miles for a technical infraction.

The race was the first of three in Dean’s life, which ended tragically Sept. 30, 1955. Dean crashed his Porsche Spyder and died instantly on his way to a race in Salinas.

Dean’s close friend, Lew Bracker, missed that winning debut but had come with the actor to Palm Springs the previous fall for the seventh running of the desert’s races (begun on city streets in 1950 and moved to the airport in 1953).

“Jimmy loved being in the pits talking with drivers and looking at their machinery,” says Bracker, now a Palm Springs resident. “I wasn’t interested in sports cars at that time. I had a convertible and thought that was the top of the world.” 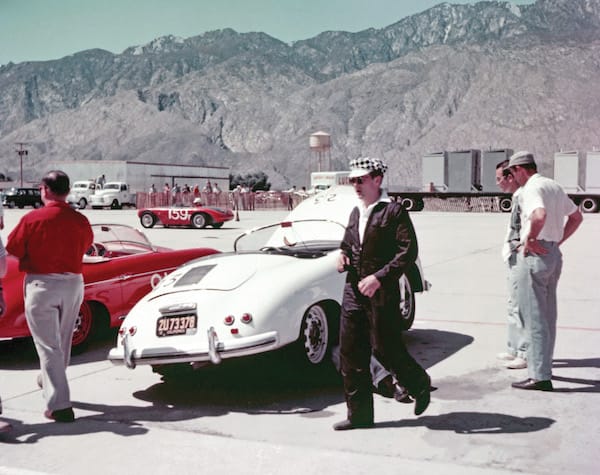 Now the site of the Palm Springs International Airport, the old track where James Dean had his first race (and taste of success) was favored by racers for its long, fast straightaways.

Dean’s legendary curiosity and enthusiasm caused the racing bug to strike Bracker, who competed in Porsches for two years and won his first trophy (for second place) in the Palm Springs races of December 1955 — “the race that,” he says, “Jimmy and I were supposed to race together, which of course he never made.”

In his book Jimmy & Me, Bracker describes phoning Dean on Sept. 18, 1955, to report seeing a Porsche Spyder in the window of Hollywood’s Competition Motors. When Dean showed up at his house in the new car, Bracker quickly made a deal to trade in his Porsche Speedster for the Super model his friend had just left at the dealership.

That Super Speedster was the car, Bracker says, that he drove to a second-place finish in the Palm Springs Road Races six months after Dean’s win there.
“Nobody really asked me [about the car],” he says. “I am not sure a lot of them knew it had been Jimmy’s.”

Bracker remembers the Palm Springs races as more than a sporting event.

“The El Mirador Hotel and Howard Manor were favorites of the Beverly Hills class. And Charlie Farrell’s Tennis Club was a big Hollywood draw,” he says. “But the two times Jimmy and I were here together, we stayed at motels in the north end of town. Jimmy didn’t want to hang out with Hollywood people. Also, he didn’t have money then. He was making movies, but they weren’t paying him much.”

Bracker, who met Dean through a mutual friend (East of Eden composer Leonard Rosenman), says they came to Palm Springs on a whim at Dean’s suggestion.
“He was going from one movie to the next [East of Eden, Rebel Without a Cause, and Giant]. I think he just felt Hollywood closing in on him,” Bracker opines. “A great part of our relationship was that we didn’t discuss Hollywood and just went with the flow. We were in our 20s and had the same interests most young guys did: cars and women.

“Jimmy and I never had lengthy telephone conversations. Neither one of us liked talking on the phone,” he notes. “He would call and ask, ‘Can you come up to the studio tonight to keep me company?’ He would get bored sitting around [on the movie set]. I got those requests quite a bit just to come shoot the breeze in between whenever they needed him.”

After Dean raced in Palm Springs, Bakersfield, and Santa Barbara from March through May 1955, Warner Bros. prohibited its rising star from further racing while he was under contract. But that didn’t stop the acting phenom from going to Santa Barbara to mentor Bracker in his first race, behind the wheel of the Porsche 356 Speedster, on Labor Day weekend of 1955.

According to Bracker, Dean gave him his helmet, signed it, and said, “Now I’ll always be in the car with you.”

Dean gave his friend the further “insurance” of advice based on his personal experience.

“He told me to relax, and he told me to not try to win my first race but just see what it’s all about,” Bracker says. “He didn’t do that in his first or second or third race. He went hell for leather and banged up the machinery, which I never did, and blew a piston, which I never did. The races he drove, he was all about getting to the finish line first.”

Bracker eventually switched cars to a Porsche 356 Carrera that he says was the first factory-painted black Speedster.

“Racing in Palm Springs was something we all, as drivers, looked forward to. The Palm Springs track, laid out on what is now Palm Springs International Airport, was considered a very fast track. You really got up to high speed.”Lew Bracker

“I insisted it be black because I had seen Jimmy in that black driving suit he wore in Palm Springs, and I thought all black would be very dramatic,” he says.

Such thinking played out in the race for production sports cars 1,600 cubic centimeters and under in the Palm Springs Road Races in 1957.

“Bracker won, but not easily, for [E.] Forbes-Robinson tagged him through the entire race with never more than a scant five seconds between them,” reported that year’s June issue of Road & Track.