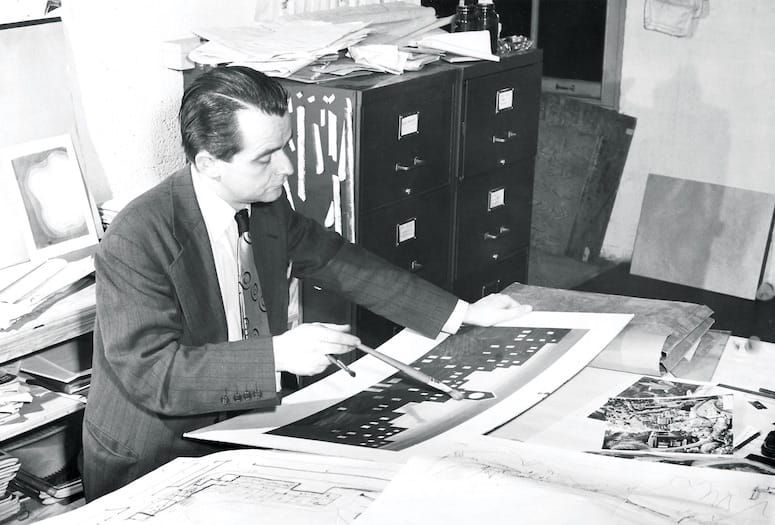 Late in the afternoon of April 30, 1969, as the bright desert sun steadily began to exude gentler hues of twilight, an unusual scene unfolded on a vacant lot high in the Cahuilla Hills. There, amid boulders and scrub brush, an elegant cocktail party was underway. With the entire Coachella Valley stretching out before them, the fashionably dressed attendees sipped on imported Champagne while trying to avoid scuffing their custom-made loafers and designer heels, including architect James H. McNaughton. Nearby, in stark contrast, a gaggle of teenagers in full hillbilly regalia gave out with a banjo concert of “good ole mountain music.” Adding to the surrealist scene was an enormous Great Dane named Pooch and a tiny white poodle so refined it was said to understand only French.

Waggishly dubbed “Champagne on the Rocks,” the festive occasion was a novel way to celebrate the groundbreaking for a new home, a desert retreat to be built for Joe Whiteford, president of the Aeolian-Skinner Organ Company. Whiteford was proving to be a delightful host, moving about in a shimmering gold raw silk shirt and matching trousers while greeting impressive figures, such as composer Frederick Loewe of My Fair Lady and Camelot fame, former Metropolitan Opera diva Lily Pons, and Jolie, Magda, and Eva Gabor, the latter at the pinnacle of her Green Acres fame.

• READ NEXT: The Journey of San Simeonita and James McNaughton.

At the appointed moment, a golden shovel appeared with great fanfare for the ceremonial turning of the earth. It was not handed to Whiteford or any of the attending celebrities but rather to an innocuous-looking middle-age man who emerged from the crowd with a cigarette dangling loosely from his lips. To the chants of “Jimmy! Jimmy!” and popping flash bulbs, the man paused dramatically and then plunged the shovel into the dirt and gave it a quick turn. As the crowd roared its approval, James Henry McNaughton — “Jimmy” to his many friends — broke out into a puckish grin.

It was a triumphant moment for the architect and designer, yet it was the closest the house would ever come to being built.

While the prospect of a project falling apart remains one of the occupational hazards for every architect, the collapse of the Whiteford commission must have nonetheless been a terrible disappointment for McNaughton. In spite of his popularity and critical acclaim, commissions did not come frequently, and it is believed that during the entirety of his architectural career, 1959–1979, only about two dozen of McNaughton projects made it from drawing board to house warming.

Yet what did get built was extraordinary and secured his legacy as one of midcentury Palm Springs’ most talented and unusual designers, and today, there is a growing appreciation for both the quality of his designs and the character of the man behind them. 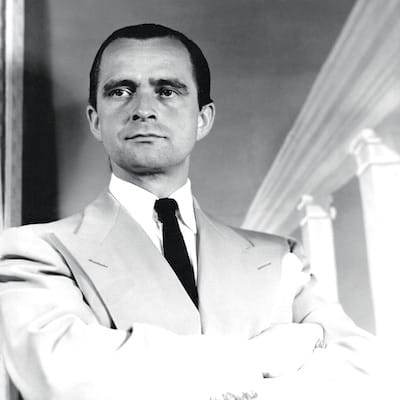 McNaughton was 47 years old when he first settled in Palm Springs, but he had already lived a life that would be the envy of every overachiever. A true renaissance man, he was an accomplished painter, muralist, and pianist. He not only played the pipe organ, but he designed them for prestigious venues, including the Pittsburgh Organ Academy, Boston Philharmonic, and Los Angeles Music Center. During the late 1930s, he had a brief but brilliant turn as a designer for Steuben Glass, fashioning exquisite pieces, some of which are displayed at the Smithsonian.

The skills he mastered in New York came in handy in Palm Springs.

But McNaughton’s greatest success had been in television. After graduating with honors from Carnegie Tech in 1935 with a degree in architecture, McNaughton headed from his native Pittsburgh to New York City, where he hoped to design sets for Broadway productions. Instead, he found himself drawn to television. A true pioneer, McNaughton is justifiably declared to be TV’s first official art director. It was through his masterful use of perspective that static one-dimensional backgrounds gained the illusion of height and distance.

During the peak of his career in the 1950s, McNaughton earned many honors and awards, and his $100,000 annual salary was among the highest in the industry. By the end of the decade, he felt he’d gone as far as he could and made a clean break, not only by leaving television but switching coasts as well. The skills he mastered in New York would come in handy during his encore career as an architectural designer in Palm Springs.McNaughton must have known he faced a stiff challenge trying to compete against highly regarded Coachella Valley architects with names like Frey, Cody, Wexler, and Williams. Instead, he decided to carve out his own niche by creating designs that were the antithesis of the prevailing sleek, minimal modernism. McNaughton liked to label the style of his homes “desert classic.” However, officially, his vocabulary included modern neoclassicalism, Greek, Roman, Hollywood Regency, and, in at least one case, “new formalism.” 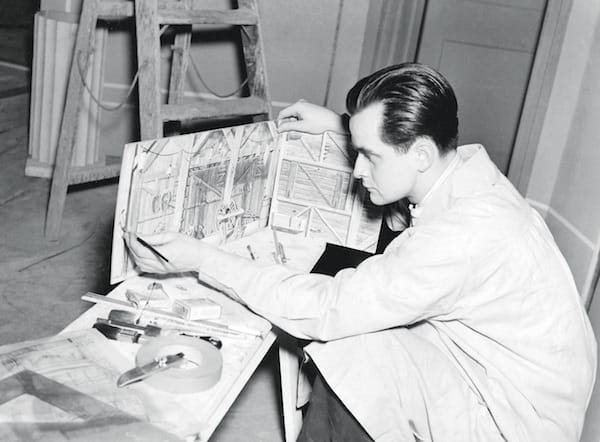 The artist, architect, and set designer at work. 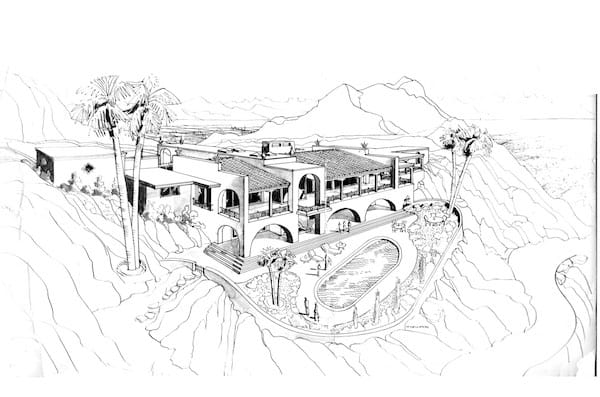 McNaughton knew not only the technical aspects of architecture, but also the theatrics of it in a way few others did. He understood what drew people’s interest and strove to create dramatic residences that were impressive to the eye and wholly livable as well. “He listened,” remembers Robert Miller, who was McNaughton’s assistant and good friend for 18 years. “He did all he could to give his clients whatever they wanted. He made their dreams come true.”

McNaughton also had a great advantage in speed, learned from years of “three-day deadlines” at the networks. He could not only draw plans for a house in record time, he could do them upside down, both surprising and delighting prospective clients. For much of his time in the desert, McNaughton owned a combination home and studio at 210 Camino Carmelita; the property became a showcase for his architecture and design work. He transformed what had been a simple set of guest houses into an artistic compound with hand-painted murals and rare antiques collected from around the world. Two enormous brass foo dogs were positioned to stand guard atop the entry stairs allowing guests at Chez Jimmy to make a suitably grand entrance. And many did.

In 1961, McNaughton got what is known in the theatrical world as his “big break,” when Harry R. and Willa Morrill engaged him to design their mansion on an expansive site in Little Tuscany. The Morrills wanted a standout residence that would impress and awe, but they wanted it on a less-than-awesome budget. McNaughton knew exactly what to do, achieving expensive-looking effects through clever theatrical tricks, such as substituting vinyl for marble and, in an inspired stroke of genius, discarded Los Angeles street lights remade into Roman columns. 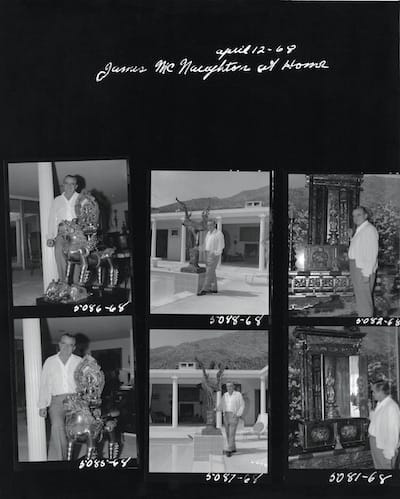 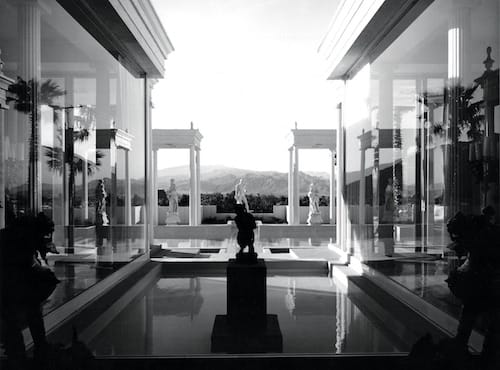 Upon its completion, the Morrill House was an instant sensation, garnering praise and coverage — locally, nationally, and even internationally. In spring 1963, The Architectural Digest, as it was then called, showcased the house in a nine-page feature. The following year, George and Rosalie Hearst purchased the villa, causing wags to quickly dub it “Hearst Castle Junior.”

McNaughton followed his Morrill House success with a dramatic shift from Roman-Palladian to new formalism in his design for the 1963 Middy and Allan Kramer residence. Here, McNaughton gave full expression to his love for the abstracted arch, which he used to create colonnades on either side of the central mass. Arches became a McNaughton hallmark, as was his generous use of glass, which led his designs to be known as “see-through” houses. 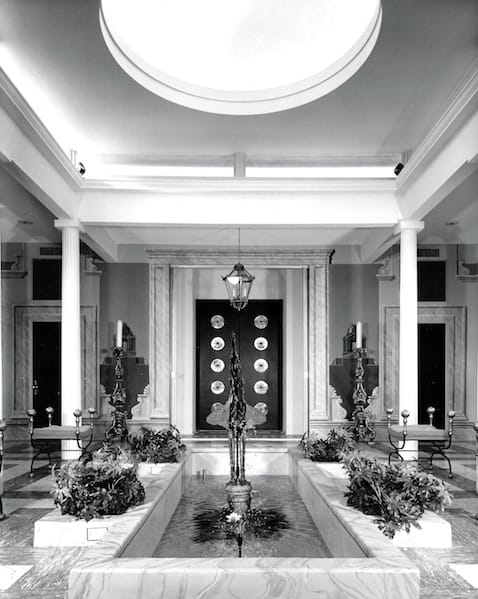 The Kramer residence was a case of lightening striking twice. The house was so well received that The Architectural Digest featured it over 14 pages. According to prominent desert architect Jim Cioffi, this attention did not sit well with established local architects who “frankly, felt threatened, fearing McNaughton would get all the big clients.”

Today, Cioffi remembers McNaughton as both a friend and mentor for having helped to guide him in his career in architecture. “He was like a father to me,” Cioffi says. “A wonderful, kind man.” And like Miller, he got a quick introduction to the circle in which McNaughton moved. “He didn’t like to drive, so one day he handed me the keys to his convertible and asked me to take him out to Scottsdale, where a house he’d designed was being finished.” After the inspection, they headed out to meet the client, Carolyn Erskine, for dinner. When she arrived, she brought along her kid brother, who happened to be U.S. senator and 1964 presidential candidate Barry Goldwater. “For a kid that didn’t know shit,” Cioffi laughs, “I learned a lot right away.”

He made a lot of money, but he spent it just as fast. 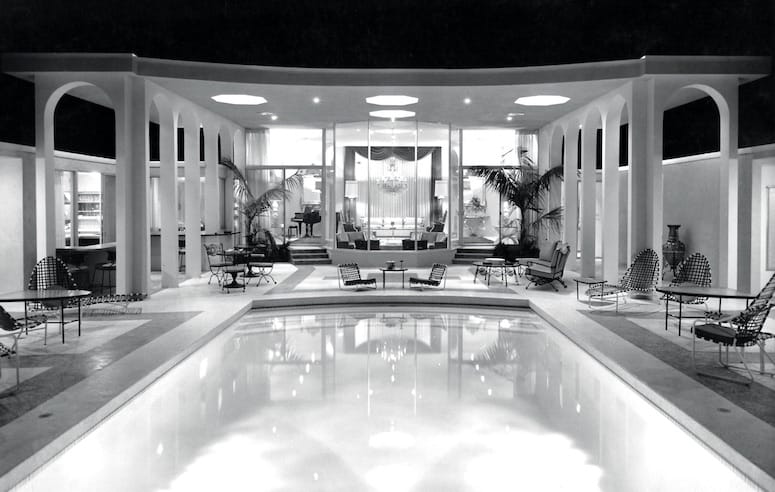 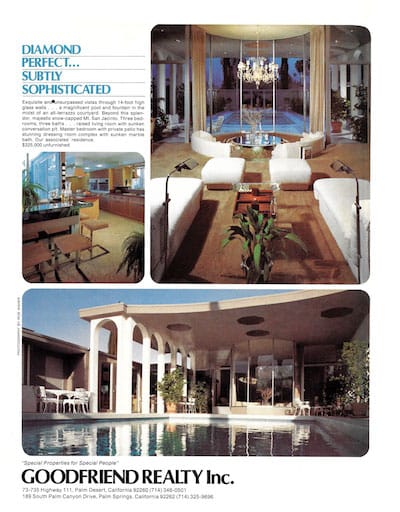 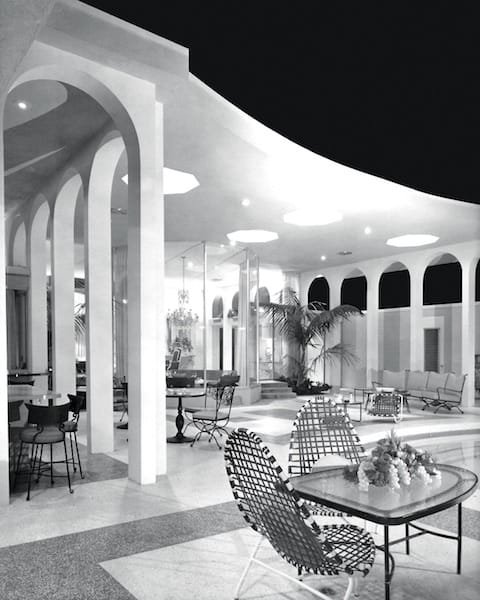 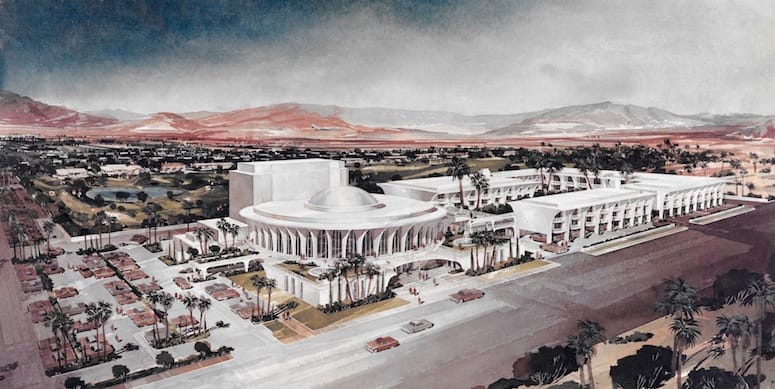 Rendering for a Palm Springs convention center and hotel.

In spite of all the favorable publicity his homes generated and the connections of his many well-heeled friends, McNaughton was only getting about one commission a year, and it was becoming increasingly hard to keep up the lavish lifestyle he had enjoyed from his heady days as a television executive. He made a lot of money, but he spent it just as fast. Expensive cars, fine furniture and antiques, travel, and entertaining quickly added up. McNaughton always hoped his society friends would come through with commissions for new houses, but few actually did. “The ladies weren’t looking to build. They just wanted someone to dance with.”

Some commissions did come in, not only in Palm Springs but also farther afield, including Las Vegas, Nevada; and Phoenix. It was in Arizona that McNaughton designed one of his most unusual homes. Cioffi recalls that one day McNaughton hit on the idea of taking the glue-laminated beams, which were being used to support the home’s living room ceiling, and bending them outward rather than inward so they created the look of a blooming petunia. “I thought he was nuts,” Cioffi recalls. “It wouldn’t support the weight.” But McNaughton knew what he was doing, and the finished design proved both structurally sound and aesthetically pleasing. Completed in 1973 and appropriately dubbed the “Petunia House,” the design showed McNaughton’s masterful ability to fuse bold artistic vision with technical reality.

During the early 1970s, McNaughton teamed with local builder Paul Butler on a series of spec homes in Andreas and Murray canyons, and while they might not be considered his finest work, they stand out from their less-imaginative neighbors. Yet, nothing stands out more dramatically than the house McNaughton designed for Butler’s own residence in 1974. In what may have been his last commission, McNaughton pulled out all the stops with a bravura design so bold it might be classified in a category all its own — Aztec modern. Unabashedly different, truly one-of-a-kind, it stands as a perfect metaphor for the genius of its creator.

McNaughton died on March 26, 1979, at the age of 67. His obituary in The Desert Sun, written by his longtime friend Frederick Heider, noted in part that the homes McNaughton designed stand as his memorials: “Along with his gentle heart, these are his legacy.” And as for the setting of the “Champagne on the Rocks” party, a home was eventually built on the site. Its architect was Cioffi, McNaughton’s friend and former acolyte. Jimmy would have loved that. 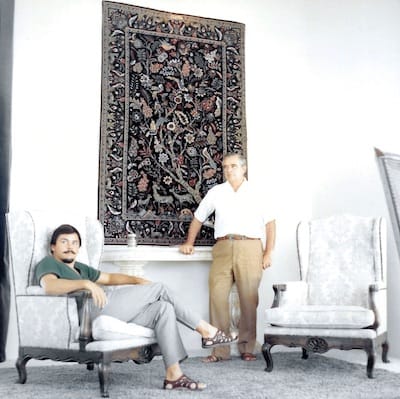 James McNaughton and Robert Miller in 1968.