James Haake Finds Life is a Cabaret in Palm Springs 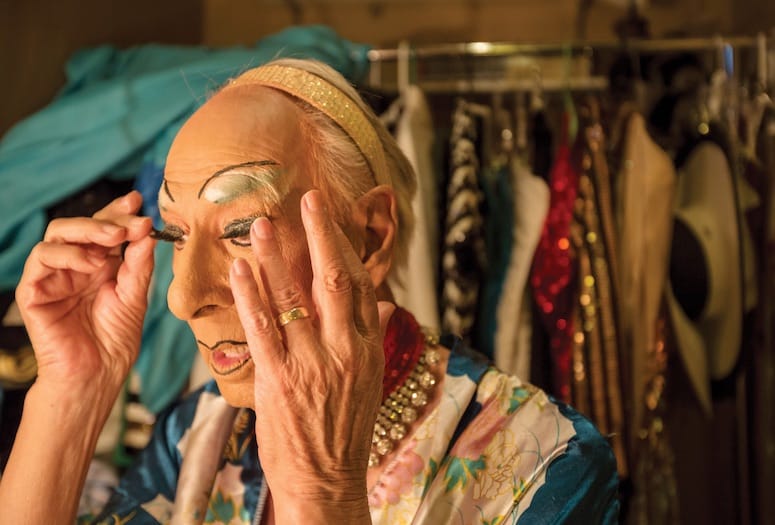 Gypsy is "mastress of ceremonies" at Oscars Café & Bar in Palm Springs.
PHOTOGRAPH BY JAIME KOWAL

“I saw Chita last night,” Gypsy says. Rivera, of course. “We were at the McCallum after her show [in January], and she had just turned 85, and I was just turning 86. She and I go back to the Fred Ebb and John Kander days.”

other words, local cabaret star James “Gypsy” Haake is a product of the Golden Age of Broadway.

“I was on the road until I opened my [New York] club in 1968,” he says, his grin at once wicked and delighted, “which I named after myself, of course.”

“Gypsy” is not an assumed name. Get that straight. Nor is it a moniker bestowed. Gypsy is a title Haake earned.

“I never put a dress on before 1980,” he says. “I had retired. I was living in Los Angeles, and on opening night of  La Cage aux Folles, the West Coast branch of the very famous club in Paris, the emcee they’d hired wanted too much money. And there I was. We went shopping and got 12 gowns and six pairs of heels, my size.” Gypsy has been compèring celebrity female impersonators ever since.

Now “mastress of ceremonies” at Oscar’s Café & Bar in Palm Springs, Gypsy hosts weekly dinner shows, each of which he dubs “a mini master class.” The starlets portrayed, from Judy Garland to Madonna, are those every smart, cultured, diva-loving person needs to know.

Gypsy dresses the part to a comic degree. “No wigs,” he notes. Just cobalt blue eyeliner and Cleopatra-esque beaded headpieces. “I don’t do what these incredibly talented impersonators do; I just set the stage and get out of the way,” Gypsy says. “It’s an art form, like kabuki, but with better gowns.”

“Ross Dress for Less — on Tuesdays it’s 10 percent off for seniors! Yes. I got a smart skirt from Ross that I wear as a  cocktail dress in the show,  $9 plus tax. You can’t beat it.”