Blair Williamson and Jamie Brewer portray Charlie and Gina in the movie, Turnover, which opens the Palm Springs International Down Syndrome Film Festival on May 3.
PHOTOGRAPH COURTESY LINDA PALMER

A new cinema fest honoring on-screen and behind-the-camera efforts by people with developmental disabilities will debut in the desert May 3 - 5, with some proceeds going to a Coachella non-profit. Palm Springs International Down Syndrome Film Festival, presented by Filmmakers Gallery, will screen 20 comedic and dramatic features and shorts, as well as documentaries at the Palm Springs Cultural Center.

Actress Jamie Brewer, who was cast in four seasons of the Emmy and Golden Globe Award-winning series American Horror Story, will be in attendance during the fest. Her recent movie Turnover, which won the Audience Choice award and Best Feature Film for Family at the Idyllwild International Festival of Cinema in March, will kick off the event on May 3.

Brewer passionately advocates for people born with chromosomal deviations that cause Down Syndrome (DS), with its spectrum of physical and cognitive differences. For years, she has volunteered as a speaker and encourager through organizations such as Best Buddies, The Arc, and Down Syndrome Associations of Orange County and Los Angeles.

“Jamie Brewer is a talented, hard-working actress and an incredible advocate for individuals with intellectual and developmental (IDD) disabilities within the entertainment industry and society at-large,” says Anthony K. Shriver, founder, chairman, and CEO of Best Buddies International.

"Best Buddies is so grateful to have Jamie and her family involved with our mission of inclusion," Shriver adds. "She truly is the perfect example of how one is not defined by their disability but rather their ability to accomplish great things in life. Whether she is starring in an off-Broadway play or walking down a runway during New York Fashion Week, Jamie is constantly breaking barriers and leading the way for her peers.”

Among the children Brewer will meet at the Palm Springs festival is a 3-year-old whose mother launched a local non-profit to help educate and support families with DS children – Ezekiel's Gift of Love: Coachella Valley Down Syndrome Foundation. Yadira and Mark Regla-Cuevas were told their baby had signs of DS after a sonogram 11 weeks into the pregnancy. They chose to continue, despite what Yadira said were suggestions by the medical community to terminate the pregnancy. She said Ezekiel has reached many milestones, such as walking and talking, earlier than was predicted and he has brought so much joy that she would welcome another DS child if one came along.

“We’ve received so much out of that extra chromosome,” she says, laughing. “He is such a ham.”

Yadira, a licensed marriage and family therapist who works at Palm Springs High School, also performs advocacy across the country through a group called Down Syndrome Diagnostic Network, which helps the medical community learn how to break the news to parents, using up-to-date information and positive language. Sometimes she takes Ezekiel along on the trips. 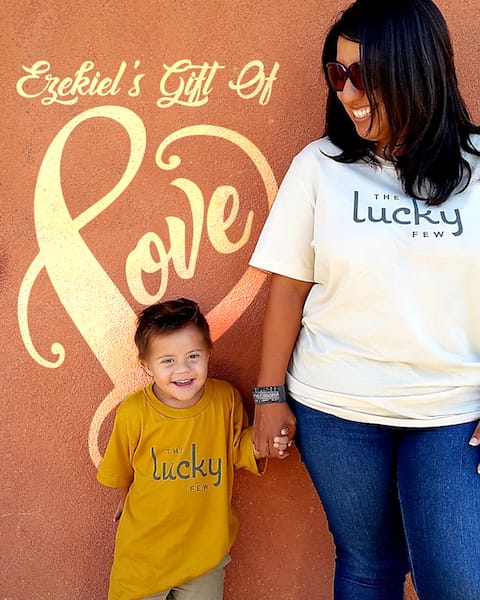 Yadira Regla-Cuevas with her son, Ezekiel.

Locally, her group offers educational events and social gatherings for families who have DS children, plus “typical” families, in order to allay parents’ concerns and to help people learn to appreciate their children’s abilities. She wants to offer everyone understanding and the skills to interact with each other, whether they are typical or not.

“Jamie is bright, funny, spontaneous, talented, dedicated, determined and inspirational,” they say. “She was our first and only choice to be our keynote speaker and festival ambassador.”

The men have a special interest in the subject of DS because their nephew, Ryan Landry – who has won multiple Special Olympics awards in various categories – has Down Syndrome, they say. Brewer called them “amazing guys” and said she’s “excited to see them again in Palm Springs,” where she has previously met Ryan with them.

Shannon Dieriex, who danced in Cher’s music video Woman’s World, which will be shown at the festival, is another special guest. Dieriex is featured in the movies Whitney’s Wedding and Check Mate set to screen at the fest. Also in attendance will be Nick Bahen, a down syndrome writer, director, producer and actor, who will screen a dramatic short at the festival, Mystery Street. 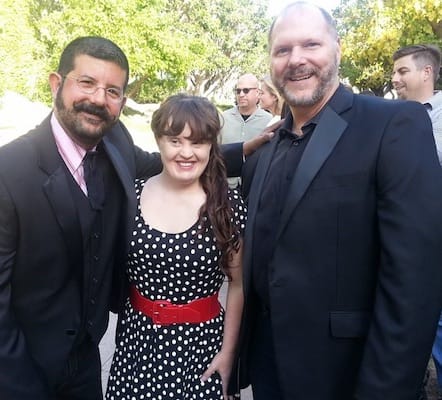 Brewer, who says she spends her days and nights watching stage plays and movies, adds this festival will not involve voting and judging. It’s simply a “major get-together to see films of all genres and to see the accomplishments,” she says.

She says acting has taught her “how to be myself and how to incorporate different things into my life and do my work.” She lives in Southern California and has taken theater and dance classes at Mt. San Jacinto College. Brewer is currently studying music, sign language, Spanish, and French. She would like the world to know that people with Down Syndrome can “work, go to college, be successful, find love and be independent in every way in life.”

Brewer says she was inspired to act by “seeing people with disabilities on stage and screen, for example Chris Burke on the TV show, Life Goes On. I used to think, I will see myself on screen some day. I can do the same things he’s doing.”

This week, Brewer’s movie Turnover will also screen at the Manhattan Film Festival in New York City, and then the Bentonville Film Festival in Arkansas, whose co-founder and chair is Academy Award winner Geena Davis. At the Bentonville festival, Brewer will be honored with the “See It, Be It” Award, “which highlights a rising and influential voice in the landscape of diversity and inclusion in media,” according to the festival website. 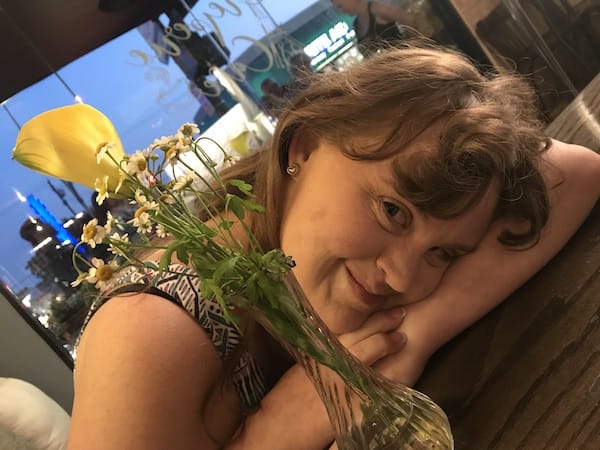 “We are very caring and supportive,” says Jamie Brewer. “It’s a natural instinct. We don’t see the bad in people.”

Filmmakers Gallery offers both educational events and entertainment in Palm Springs, including chances to meet and mingle with artists from various media at book signings, film screenings, and art shows. Belsito and Roche launched the concept in Long Beach in 2012, then brought it to desert. They have partnered with the Palm Springs Cultural Center since 2017.