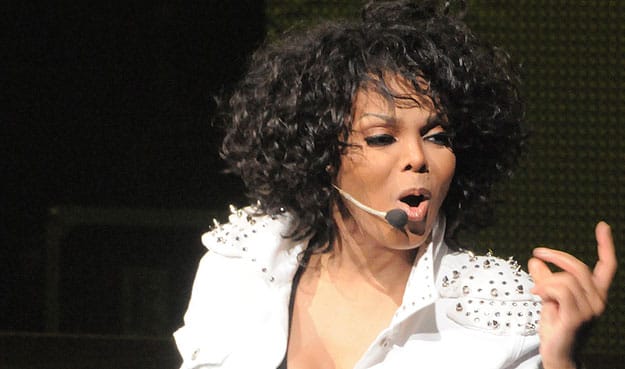 Ted Giatas, President and CEO of the McCallum Theatre proudly announced from the stage of the McCallum Theatre that the annual Fundraising Gala raised $1 million for the theatre – an amount, he said, that had not been earned from the annual event since 2008.  Janet Jackson fans literally filled the theater to the rafters with every seat in the balcony and upper boxes occupied by fans who shouted, swayed, sang and moved to the music. The older theater supporters picked up earplugs served in the Founders Room before the concert and a few left mid-way in the show. It was apparent — this was an audience whose members either adored or disliked the popular diva’s music. There was no in-between.

Kudos to the theater staff for the amazing job they did with the sound and lighting. It was a production worthy of a huge stadium but dished to concert goers in the McCallum’s intimate setting. Quite a feat! Video of Jackson as a child and photos with her younger brother Michael brought cheers from the crowd. After Giatas and board chair Bill Powers made their optimistic financial announcement, there was a long wait in the theater before the show actually started. No one knew what caused the wait until the Jackson family — including Janet’s mom and Michael’s two children, made their entrance. There was applause, the music roared and the lights came up on Jackson in blue jeans and a short cropped white jacket. The choreography highlighted terrific contemporary dancers who accompanied Jackson, a non-stop twirl of motion. Janet Jackson proved when it comes to movement, she doesn’t have to take a back-seat to memories of brother Michael’s moon-walk.

The honorees were Gilbert and Thelma Schnitzer who have supported the McCallum since two years before it opened and bestowed a hefty $100,000 on the annual fundraiser. They served as Honorary Chairs along with Arlene Schnitzer, also a major contributor to the McCallum Theatre.

While younger Jackson fans were able to buy concert tickets for $100 each, long time sponsors, benefactors, and patrons enjoyed a package that included dinner before the concert at one of four restaurants: Cuistot, Jillian’s, Ruth’s Chris and Wally’s Desert Turtle.