Most legacies have colorful backstories. Some of them are filled with meteoric rises. Others contain crashes and burns that leave nothing but smoke and ash in rearview mirror of life.

And then there are those that contain muses who hope to inspire and venture forth to the beat of their own creative drum.

Known for her creative collaborations with — and her marriage to —music’s Ike Turner (from 1995-2000), Bazzell Turner comes to Miracle Springs Resort on June 22 for an eclectic show spanning several musical genres —from rock to jazz, and all things in between.

Bazzell Turner joined creative forces with Ike Turner in the late ’80s, eventually becoming his lead singer on the road. After their divorce, they remained friends. Ike Turner died on Dec. 12, 2007. A medical examiner ruled Turner’s death was the result of an accidental cocaine poisoning. Bazzell Turner questioned that ruling, telling San Diego Reader in 2012 that “it was that psychotropic drug Seroquel ... and it blew his heart up.”

So … don’t be surprised if other “factoids” become more than just a footnote in an evening that could include the sharing of life stories — Bazzell Turner is outspoken about Ike Turner’s musical legacy, ex-wife Tina Turner, and the bold headlines that befell the couple after the biopic What’s Love Got To Do With It? shed light on the famous musical duo’s contentious marriage.

Do you become most alive on stage?

It’s a different part of me that people don’t see in everyday life. Being on stage opens a door where I can become somebody different. I feel free to let go.

Let’s talk about your own musical evolution.

It’s something I truly love to do. For a while, I didn’t sing, because of Ike’s death, which was very sad to me. But if you don’t dream and live your dream, you die. I want to live my dream and give as much as I can. 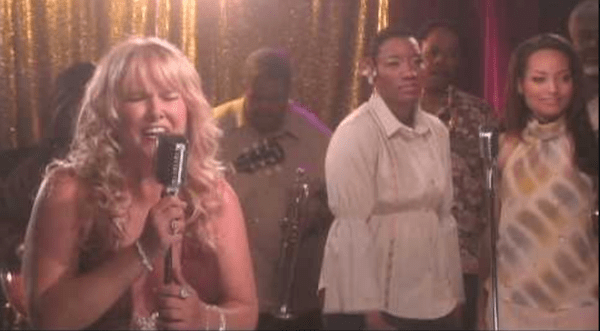 "There’s a lot of history about him (Ike Turner) that has never been told. It’s a shame. If any time I can share it with people and educate them, that’s important …"

You say you took a pause from performing so let’s talk about what actually got you through Ike’s passing.

I am a believer — I was raised in the church. That had a lot to do with it. That’s what saved me going down the wrong roads. I’ll leave it at that.

Many people may be curious about your relationship with Ike Turner. It’s such a ‘charged’ name — from the talent to the headlines. What are a few misconceptions about him? Or, things that people might not actually know about Ike Turner?

That he a good heart and helped a lot of people. Many people are unaware of that — people in industry, friends, musicians. With our relationship … I wouldn’t tolerate any craziness in a relationship. Period. I think most people won’t. I know for a fact that Tina [Turner] didn’t. She didn’t stick around for 18 years for nothing. I actually had 19 years as a business partner with Ike. I did marry him. I did divorce him. But he never signed the divorce judgment. He called me his “backbone” when he got the Grammy in 2007. That was huge for me. He taught me a lot — especially about the business. It may not be the way other people think things should be done. But Ike would always say, “It’s not how you did it but did you?”

What are the biggest lessons you learned through your involvement with Ike?

Learning the business, running it, and how to deal with people. I also learned a lot about life from Ike — the person. You know, a lot of people don’t understand, he went through hell as a child. His father was lynched, he was molested, and his mother, after Ike’s father died, had him sell potato pies and rugs. Whatever he could do to contribute. I think what you go through in your childhood has everything to do with how you become an adult. If you don’t understand what somebody has been through, you can’t understand that person. Sometimes people make mistakes. I don’t know anybody walking this earth that hasn’t made a mistake.

That movie What’s Love Got To Do With It? assassinated Ike’s career. But more than that, it broke his heart. It hurt him … because he helped a lot of big artists make it. A lot of people don’t realize that he was a talent scout. He was involved on B.B. King’s first hit record. Buddy Guy’s first hit record. He was one of the very first black men to own his own copyrights and publishing, and learn the business at a young age. He was working for these guys when he was 16. There’s a lot of history about him that has never been told. It’s a shame. If any time I can share it with people and educate them, that’s important …

It’s important to you?

Ike doesn’t get any recognition because of all the negative things [shown] in that movie and in his relationship with Tina … Even if he did wrong, he’s going to get punished for all the contributions he made to the music industry? I think that’s a shame. I mean, I went through things with Ike, too, but there’s a time to forgive and to let go. To strip him from having the opportunity to get recognition in an area where he was entitled to deserve it, it’s so wrong to me.

After your marriage, you and Ike both remained friends?

Yes, we did. Not right away. I was mad at him [Laughs]. But we continued on. I really did love Ike Turner. My first husband. My only husband at this point. I met him when I was 24. When I met him there was no movie out, no book out. I didn’t know anything about his relationship with Tina because I didn’t follow it. I was concerned about my own career.

He called me his “backbone” when he got the Grammy in 2007. That was huge for me. He taught me a lot — especially about the business. It may not be the way other people think things should be done. But Ike would always say, “It’s not how you did it but did you?”

Speaking of that … how would you define your music style?

It’s a variety of music. I actually did this World Championship of Performing Arts with 2,500 people from around the world. I have this dream of collecting royalty checks from every musical genre. The record companies don’t like that — you have to be “one way.” But in that championship, I won five gold medals — in country, rock ’n’ roll, rap, gospel and blues. I’ll have that, and jazz, in my show. I think it will be something most people might not expect to see.