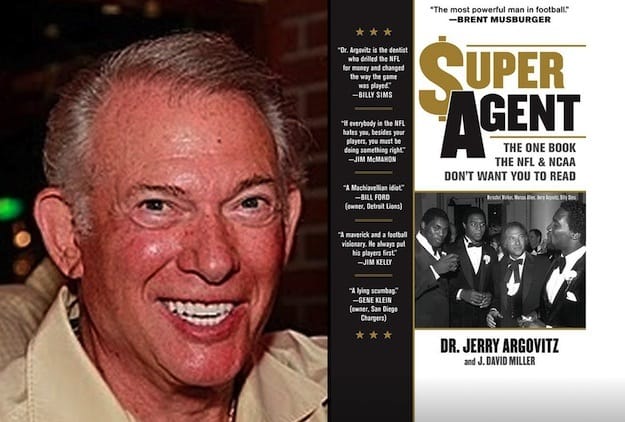 Jerry Argovitz, who lives part of the year in Rancho Mirage with his wife, Loni, used his recently released book to trigger a renewed fight to change the NCAA.

The NCAA is flat out lying about why college athletes are not compensated.

That’s the contention of Rancho Mirage author Jerry Argovitz, whose recently released book written with J. David Miller, “Super Agent: The One Book the NFL & NCAA Don’t Want You to Read”, puts the NCAA on notice that he’s coming after them.

“They (NCAA) just don’t tell the truth,” Argovitz said. “It’s a myth. The reason they don’t pay the players is because then the players would become employees. If they were employees, you would have to furnish workman’s compensation for these players. And they (NCAA) would lose their tax-free status.”

The just completed NCAA men’s and women’s basketball finals are an example of the TV cash cows controlled by the NCAA. The bigger money is in football, which could exponentially explode next year with the new BCS playoff format to be introduced.

“It’s about multi-billions of dollars, not millions anymore,” said Argovitz, who with his wife, Loni, split the year between Rancho Mirage and Houston. “It’s all tax free to the NCAA and the colleges, and the players are still not getting anything.”

Argovitz believes the answer to compensating college athletes is not a specific dollar figure, but a collective bargaining unit for the players.

“It’s not just about compensation,” Argovitz said. “It’s the whole package. It’s their health. I have a deep concern about concussions. It’s their education. I have a concern about the disparity for these young men who are putting their life and limb on the block every time they walk on a practice field and every game they play. College kids have no one protecting their rights.”

Argovitz spent the bulk of his career representing college athletes after starting off as a dentist followed by successful real estate investor. Argovitz said he quickly became the agent that the NFL told players to stay away from because of bucking the system and not dancing to the tune sung by the owners.

“Dealing with the NFL, it’s a total monopoly,” Argovitz said. “They had a system, a slotting system. You were either a part of their good ole boy system or you just saw there was nothing right about it. “

Argovitz negotiated the first million dollar contract for former Detroit Lion running back Billy Sims; took Keith Gary and David Overstreet to the Canadian Football League when he couldn't get the deal done with the Pittsburgh Steelers and Miami Dolphins, respectively, and he was the agent who helped Herschel Walker become the first college football player to leave college early and sign with a pro team in 1983.

With a resume like that, cleaning up the NCAA seems right in line.

Argovitz got back into the fight when he read about Reggie Bush being stripped of his Heisman Trophy for taking money from an agent while playing for Southern Cal.

“I just saw all of the exploitation going on,” Argovitz said. “Thirty years later it’s the same stuff going on, but there is so much more money involved.”

Argovitz argued it’s nearly impossible for a college football player not to break the rules when nearly 80 percent of the blue chop athletes are African American.

“A huge majority come from a financially struggling family,” Argovitz said. “He can’t have a job during the season or off the season because training is year round, so they set him up where he has to break the rules. These dirty agents break the rules and give the kids money. If they get caught, they get thrown out of school, they are embarrassed and humiliated. Agents could care less.”

Argovitz helped create and pass legislation in Texas (House Bill 1123) prohibiting an agent from passing money to athletes. If caught, the agent faces a third degree felony offense, 10 years in jail if found guilty plus liability for the damages done to the university.

“So if we had the USC incident in Texas, that probably cost USC in damages around $50 million, maybe more. So that agent who broke the rules would be facing that type of financial penalty and sentenced to jail,” Argovitz said.

Argovitz wants to see the NCAA modernized beginning with its antiquated rules book, following the advice his parents taught him growing up in rural Texas.

“My parents always taught me rules aren’t meant to be broken, but they can be changed,” Argovitz said. “The athletes have to break the rules to survive. The NCAA and colleges have failed to protect these kids.”

To see reviews or purchase a copy of “Super Agent: The One Book the NFL & NCAA Don’t Want You to Read”, visit amazon.com